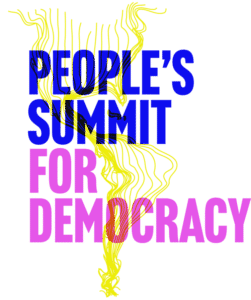 People’s Summit for Democracy
May 18, 2022 – FOR IMMEDIATE RELEASE

Among the 23 person delegation that was set to travel to Los Angeles to participate in the Summit
are scientists, Olympians, and youth activists

Los Angeles – The People’s Summit for Democracy is outraged by the decision of the United
States government to deny visas to a 23 person delegation from Cuban civil society. The denial
of their visas is an affront to the same democratic values that the U.S. government and its
“Summit of the Americas” pretends to uphold. With this decision and Cuba’s exclusion from
Biden’s official Summit, Cuba has been denied a voice in vital discussions about democracy,
integration, and regional cooperation.

Among the 23 people set to travel to Los Angeles to participate in the People’s Summit for
Democracy were renowned Cuban scientist and medical doctor Tania Crombet Ramos a
member of the World Academy of Sciences who contributed to the development of several
life-saving vaccines, Reineris Salas Pérez an Olympic wrestler who won the Bronze medal in
Tokyo, Jorge González Nuñez a queer Christian student leader, and many others including
journalists, artists, trade unionists, and community leaders.

The participation of these diverse representatives of Cuban society would have given people in
the U.S., particularly young people, an important opportunity to learn more about the island
and build people to people relationships. It is an affront to the very necessary dialogue and
normalization of relations between the people of the United States with the Cuban people who
have been unjustly separated by the six-decade illegal U.S. blockade.

Manolo De Los Santos, one of the organizers of the People’s Summit said: “The U.S.
government’s policy towards is cruel towards the Cuban people, but also towards the people
of the United States who are being denied the right to not only relate with the people on the
Island, but also to be able to speak and dialogue directly with them.”
We call on the U.S. government and its Embassy in Havana, to reverse the decision to deny their
visas.

Sign our petition calling on the US to reverse their decision: https://chng.it/CjY4x8R4bq