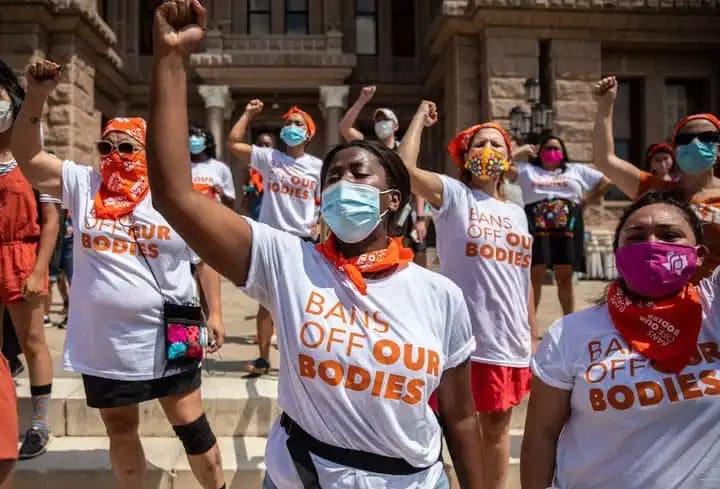 We must defend a woman’s right to choose whether or not she wants to be pregnant. Nor can we forget others who may become pregnant, including trans men, non-binary and gender non-conforming people. That most basic freedom may now be denied, with the U.S. Supreme Court indicating it will overturn Roe v. Wade, the ruling upholding a person’s right to control their own body.

Ruling-class politicians of the Democratic and Republican parties have either pushed this tremendous attack on women, or allowed it to be pushed. They’ve allowed state governments like that in Texas, one of the most racist and reactionary, to continue policies that encourage further reactionary attacks around the country.

Today we the working class face unprecedented, multiple attacks. We have to be aware of those members of our class hit the hardest, like women, who are still paid only 79% on average of what men make. They are being victimized by Texas laws denying their right to an abortion, even in cases of rape or incest.

Women in Texas face forced pregnancies under penalty of debilitating fines and imprisonment, and their caregivers could face life in prison. This is having a devastating effect on those unable to travel to other states to get the procedure.

It is Black women who are most severely hit by this form of fascism. Texas has a severe maternal mortality crisis, and Black women are three times more likely than white women to die during pregnancy or as a result of childbirth. And, although abortion is a safe procedure, every week of unnecessary delay increases the risk.

The goal of these reactionaries has long been to use multiple challenges in states and the complicity of the Supreme Court to abolish Roe v. Wade. The ACLU estimates that this will mean 36 million people across the country forced to carry pregnancies against their will.

As stated in an article in the publication of my party, the Socialist Unity Party’s Struggle-La Lucha, Texas has become ground zero for some of the most reactionary and divisive laws in the United States. The government is also attacking the voting rights of Black people – many of whom died gruesome deaths at the hands of white supremacists fighting for that right. Texas leads in the racist rejection of truth-telling in teaching U.S. history – and now, of persecuting trans children and their families.

The consequences are being felt everywhere. NBC News reported on March 20 that across the U.S., state lawmakers proposed a record 238 bills since the beginning of 2022 that would limit the rights of LGBTQ2S peoples — more than three per day — with about half targeting transgender people specifically.

Isn’t it time that we abolish the appointed-for-life Supreme Court, this most undemocratic institution, and replace it with elected members representing our multinational, multi-gendered, and LGBTQ2S working class?