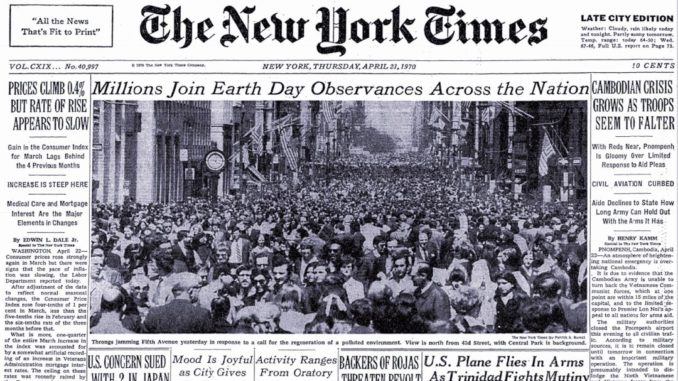 Millions of people around the world rally for environmental justice every year on April 22, which is Earth Day. This struggle is more important than ever as capitalist climate change continues to cook the earth.

A big step forward in the environmental movement has been targeting toxic racism. It’s not accidental that children in the Black-majority city of Flint, Michigan, were poisoned by their lead-contaminated drinking water.

Water protectors from Indigenous nations fight Big Oil and its dangerous pipelines. Hundreds of people who stopped the Dakota Access Pipeline were arrested.

Latinx and Haitian farmworkers can be poisoned by pesticides. Ninety percent of pesticides used in the U.S. are applied in agriculture. Five out of six farmworkers are Latinx.

Twelve of the 14 markers for harmful pesticides were found in the blood and urine of Black and Latinx people at levels five times that of whites.

Chemical plants throughout the southern United States are often located in Black communities. While in the North, Black and Latinx people living in the South Bronx have the highest number of asthma cases in the country.

Only through struggle has any progress been made. Auto companies didn’t want to use catalytic converters that have reduced smog.

The waters off the African country of Somalia were used as a dumping ground for toxic waste from Europe until the polluters were fought off.

Capitalist politicians have learned to speak differently than when Ronald Reagan was elected California governor in 1966. At the time people wanted to save the redwood forests from the clear-cutting lumber companies.

Reagan’s response to this concern was to remark “once you’ve seen one redwood tree, you’ve seen them all.”

So how did April 22 get to be Earth Day? The 1960s were a time of revolt throughout the world.

Socialist countries accounted for nearly a third of the world’s population. The Vietnamese and Laotian people were fighting 500,000 U.S. troops as well as napalm bombs and agent orange pesticides. Their courageous struggle found support all over the planet.

The Black liberation movement terrified the wealthy and powerful. Hundreds of thousands of anti-war demonstrators filled the streets of Washington D.C. The women’s and the LGTBQ2S movements were on the rise.

The widespread readership of books and pamphlets by V. I. Lenin – the leader of the Bolshevik Revolution – indicated how strong the movement of workers and oppressed people was.

By 1970, Lenin’s writings had been translated into more languages than the New Testament worldwide. April 22, 1970, was the centennial of Lenin’s birth. Meetings and events were planned around the world to commemorate Lenin’s life.

The U.S. ruling class wanted to divert attention from this important anniversary. They sought to keep an environmental movement within the bounds of capitalist politics.

Capitalists also wanted to put the socialist countries on trial as polluters.

Many of the socialist countries ― including China, Cuba, North Korea, and Vietnam ― had been open or disguised colonies of the big capitalist countries. These countries that liberated themselves from colonial underdevelopment were always trying to catch up.

They often had to use coal as their main fuel supply. Money that could have gone to protect the environment had to be spent to defend themselves from the U.S. and NATO.

The capitalist answer was to establish Earth Day on April 22. Big business claimed it was against pollution, too.

Capitalist media used the slogan “people cause pollution,” as if it didn’t have anything to do with making profits, the profits-before-people system.

The TV networks almost never mention that the Pentagon is the world’s biggest polluter. Today the banks, utilities and other corporations claim to be “green” as the earth continues to heat up.

We need to take Earth Day away from the billionaires. And we need to learn from V.I. Lenin and the Bolsheviks who first broke the capitalist chains enslaving humankind.