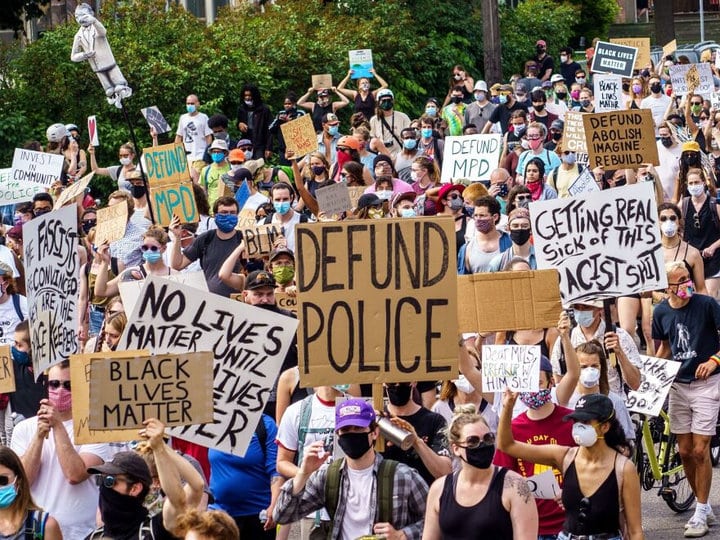 The Washington Post Fatal Shootings database reports 7,087 people shot and killed by the police since 2015. Even before we talk about racist police murder in the U.S. we have to say that that is an outrageous number in itself. Why does the U.S. have the highest amount of police killings compared to any other developed country?

It’s an indication of repression against working people in general, to discourage any protest against injustice, wage slavery and exploitation and the destruction of our environment.

When you add the fact that Black people are killed at twice the rate of white people we see an even greater problem relating to racism and genocide against Black and Brown youth.This shows why racism and white supremacy are so deadly to our class.

The Washington Post began taking the numbers of killings by police when it realized that the FBI’s numbers were only half of the actual shootings in 2014.

More recently, the New York Times published an article titled “More Than Half of Police Killings Are Mislabeled.” It reported the results of a study conducted by researchers at the University of Washington and published in the Lancet, the world-renowned medical journal.

The study confirmed that police violence has been grossly underreported for at least four decades.

So, the problem with police reporting was exposed to the world and to the administration of Barack Obama in 2015 by the Washington Post, yet nothing was done to correct it, and it still persists here in 2022.

Why? Because the problem is systemic. Since racism is an integral part of capitalism, it doesn’t matter whether a Democratic or a Republican regime is in power. Racism and racist repression are primary tools in maintaining this system. They are primary tools used to keep the working class divided and weak.

This is a repeat of Biden’s callous suggestion in regard to genocidal police killings highlighted by the George Floyd killing in Minneapolis: that the cops should just shoot people in the leg; that the militarized weapons they carry and the funds to buy more of those weapons that terrorize communities of color are not an issue.

Mayor Adams has made reactionary statements in regard to hiding racist police killings, pushing right-wing buttons. He has called for the use of more solitary confinement, which is already being used illegally across the nation – calling it “punitive segregation.” He wants more minors to face criminal prosecution as adults, and more.

A UN organization, the Office of the High Commission for Human Rights, last year did a report on racial justice and equality relating to “current racially inspired human rights violations, systemic racism, police brutality and violence against peaceful protests.”

The report highlighted four areas to prioritize to end systemic racism and the violations by law enforcement against Africans and people of African descent. These are, as highlighted on the UN High Commission website:

Nothing that Biden is proposing with his friend, Mayor Adams, addresses these points – just the opposite. It was no accident that Biden, Obama, and especially the fascist former president Trump, have done nothing but enable police murder. Biden and Kamala Harris refused to even consider taking funds from the police or reorganizing the police to make them less lethal, especially against Black and Brown communities. Barack Obama, during his administration, was approached by Black Lives Matter activists pleading for him to take the military weapons, like assault weapons and tanks, away from local police. He offered only to make sure all cops would have cameras instead – and we’ve seen how that has not slowed down the murders by cops.

The Democrats and Republicans are given their marching orders from the super rich who put them in power. Stopping police violence threatens their vital tool to keep in place the status quo of exploitation and racism, so it is not allowed to be discussed in any real way. It will take a movement specifically against police murder, prioritizing the issue of how racism is used to murder Black and Brown youth, to make any real changes.