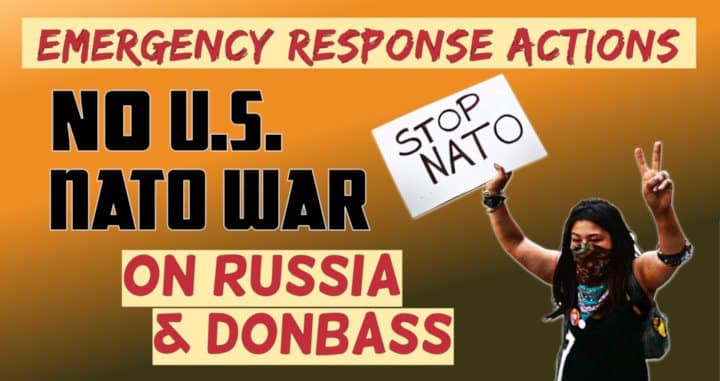 We appeal to anti-war and people’s organizations to take to the streets on the day of, day after or as soon as possible after a Ukrainian attack on the Donbass Republics or other U.S./NATO provocation to draw Russia into a war.

On Feb. 11, U.S., Britain and European Union countries ordered their citizens and diplomats to leave Ukraine, claiming an “immediate” danger of a Russian invasion. Biden deployed an additional 3,000 U.S. troops to Poland. Even Ukrainian President Zelensky, no friend of Russia, said there was no indication of an imminent invasion and asked the U.S. to provide evidence for its claim.

The most likely scenario for a U.S./NATO war provocation against Russia is to push for a military attack on the independent Donbass republics — the Donetsk People’s Republic and the Lugansk People’s Republic. While the U.S. has raised alarms about 100,000-plus Russian troops stationed to protect that country’s western border, there are 150,000-plus Ukrainian troops deployed along the approximately 200-mile ceasefire “line of contact” between Ukraine and the Donbass republics. NATO itself has more than 175,000 troops deployed on Russia’s western border.

Ukraine has been at war against the Donbass republics for nearly eight years. More than 14,000 people have died in the conflict, according to the United Nations. Despite a longterm ceasefire agreement under the Minsk 2 accord, Ukraine has routinely violated the agreement, bombing civilian areas, deploying armed drones, shooting and kidnapping members of the Donetsk and Lugansk People’s Militias, and carrying out terrorist attacks on Donbass territory.

Since 2014, when the people of Donetsk and Lugansk voted for independence from Ukraine in a democratic referendum, the U.S. has claimed that Russia “invaded” the region. The People’s Militias composed of Donbass residents and internationalist volunteers have been falsely portrayed as “Russian occupation troops.” So a Ukrainian invasion or intensified bombing campaign that forces the Donetsk and Lugansk People’s Militias to respond defensively would almost certainly be the signal for Western claims that a “Russian invasion of Ukraine” had commenced.

There is a serious lack of attention to the plight of the people of Donbass by the anti-war movement in the U.S. People living in frontline villages have been subject to deadly attacks by Ukraine for years. Seniors and children routinely have to huddle in basements. A near-total blockade by Ukraine and its allies has attempted to starve the populace. Ukrainian neo-Nazi battalions that advocate genocide against the Donbass population are stationed at the front line and would form the spearhead of a Ukrainian invasion.

Other provocations are possible, including an incursion by Ukraine and Poland against Russia’s ally Belarus, or a false-flag attack within Ukraine that would be blamed on Russia. The anti-war movement must be prepared to take to the streets immediately against a new U.S./NATO war that could quickly escalate into a global conflict between the world’s nuclear powers.

U.S./NATO out of Ukraine and Eastern Europe! Hands off Russia and Donbass! Bring all the troops home!