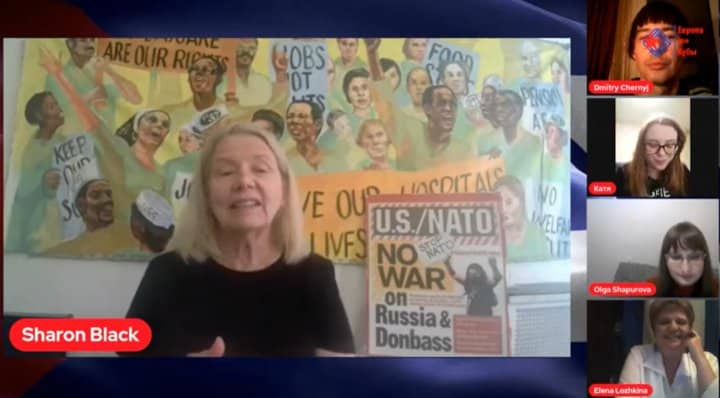 Presentation by Sharon Black, writer for Struggle-La Lucha and national spokesperson of the Socialist Unity Party, at the Europe for Cuba online forum Feb. 9, 2022.

End the U.S. blockade of Cuba

It has been 60 years this month since U.S. President John Kennedy first proclaimed Executive Order 3447, prohibiting “the importation into the United States of all goods of Cuban origin and all goods imported from or through Cuba.”

Feb. 7, 1962, marked the beginning of the U.S. blockade of Cuba. Its stated purpose was to inflict collective punishment on the Cuban people in an attempt to starve and suffocate the young Cuban Revolution.

Every U.S. administration, regardless of party affiliation, has continued this policy, in one form or another. Not because Cuba represents a security risk for the United States, but because the Cuban socialist project is a beacon for not only Latin America and the Caribbean, but for the world’s people.

Biden, who promised to continue the Obama administration’s loosening of restrictions on Cuba, reversed himself and expanded Trump’s draconian policies.

The changes during the Obama administration were based on pragmatism, not ethics or principle. U.S. policies which included not only the blockade, but invasions and terrorist attacks, had not worked and only served to isolate the U.S.

What hasn’t changed is the motive of U.S. imperialism to continue to strangle the island nation.

The COVID pandemic and its consequent suffering became an opportunity to not only reignite the former course, but to attempt to go further.

It is no secret that National Endowment for Democracy (NED), the U.S. Agency for International Development (USAID), the CIA and non-profit organizations orchestrated a highly-coordinated destabilization campaign to create chaos and promote demonstrations in the streets against the Cuban government. They were unsuccessful.

On Nov. 15, 2021, I and two other Struggle-La Lucha reporters, Ellie McClain and Lars Bertling, traveled to Cuba as part of the 31st IFCO-Pastors for Peace U.S.-Cuba Friendshipment Caravan.

Our group was one of the first delegations to travel to the newly reopened Cuba, which had been closed to international visitors because of the pandemic. Nov. 15 marked the opening of schools and services in Cuba and was also a day celebrating the anniversary of Havana.

We are from Baltimore, Maryland, where the police murder of Freddie Gray sparked a rebellion of the people of our city who were fed up with racist police terror.

Our members also represent the Peoples Power Assembly, which does community work, including setting up weekly free food distributions because our government won’t feed the people, and also a “saving lives campaign” to demand vaccines for our community.

Among our own organizers, six people contracted COVID-19, four were hospitalized, and six other volunteers died. Only 60% of the people of Baltimore are vaccinated.

We know the Cubans like to say, “We are not perfect.” But what we saw is heaven to us in comparison to our conditions under capitalism.

Our participation was as much to learn from the Cuban people as it was to show our solidarity in demanding an end to the blockade.

We stayed close to two weeks in Cuba, spending almost every minute visiting hospitals, clinics, schools, museums and especially participating in discussions with Cuban representatives on almost every aspect of Cuban life, from trade unions, to conditions of African descendents, artists and writers, and especially the deeply-damaging impact of the U.S. blockade.  We met with Latin American School of Medicine (ELAM) students and members of the Henry Reeve Brigade for international medical solidarity.

Given our own experience with the lack of medical care in the U.S. and the sacrifice of so many lives because of the inability of the U.S. capitalist system to provide care, I wanted to underscore our visit to the Finlay Vaccine Institute.

The institute helped to produce three of Cuba’s five COVID-19 vaccines: Soberana, Soberana 2 and Soberana Plus.

Under the most difficult conditions due to the blockade, Cuba was able to produce these three highly effective vaccines, rivaling the effectiveness of U.S. vaccines. The blockade had prevented Cuba from importing the reagents necessary for the production of the vaccine. And international patent restrictions blocked Cuban scientists from sharing important information.

In addition, it was nearly the first time that Cuba had to produce a vaccine aimed at a virus rather than a bacterial infection – and they were able to do it in record time. So you might consider it a miracle.

So how did they do it?

One of the major reasons given was the cooperation between Cuban organizations, the lack of competition and personal profit. In fact, these were some of the same reasons, along with a few others, for the high vaccination rate in Cuba that has now reached an astounding 90% of the population.

The people of Cuba trust the vaccines because the country has a long history of preventative health care that is steeped in education and community implementation. There is no profit motive to block health care in Cuba.

U.S. movement in support of Cuba has grown

In contrast to Biden’s cynical and criminal attempts to choke and destroy Cuba, the sentiment of the people inside the U.S. to end the blockade has grown.

On Sunday, Jan. 30, Miami Cuban-Americans and their supporters gathered at City Hall to caravan with bikes and cars to a rally at the statue of Cuba’s national hero, José Martí.

Over nearly two years, these monthly Miami actions have birthed a caravan movement across the U.S. and internationally on the last Sunday of the month – including in the streets of Cuba. Caravans kicked off the new year in Miami, New York City, Minneapolis, Las Vegas, Albuquerque, Tempe/Phoenix, Portland, Seattle and Los Angeles.

No U.S./NATO war on Russia and Donbass

We cannot end our presentation without strongly condemning U.S. imperialist attempts to ratchet up war in Ukraine. What is taking place is a deadly game that only benefits U.S. imperialism.

The U.S. rulers created this crisis and continue to pour fuel on the fire day by day.

The global capitalist system is in crisis. While some billionaires and sectors have profited handsomely from COVID, U.S. imperialism’s overall profits and strategic dominance are threatened at every turn.

In particular, the oil industry – thoroughly entwined with the biggest U.S. banks and the military-industrial complex – has been in crisis for over a decade. U.S. capitalists are desperate to stop the nearly completed Nord Stream 2 pipeline project slated to bring Russian gas to Europe.

Washington’s actions in the Ukraine are not only aimed at the Donbass republics and Russia, but also Venezuela and Cuba, who have cooperative relationships with Russia.

In the United States, the fear of widening war has stirred the anti-war movement.

No U.S/NATO war on Russia and Donbass!  End the U.S. blockade of Cuba!