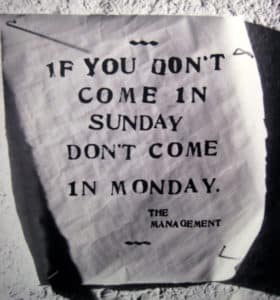 A common sign in sweatshops back in 1900 was “If you don’t come on Sunday, don’t come on Monday.” At the Sparrows Point steel mill outside Baltimore, employees worked 84 hours a week. Their only days off were Christmas and July 4th.

Fast forward to 2022. The Burlington Northern Santa Fe Railway is trying to impose a harsh new attendance policy. It could get workers fired for taking off just five holidays during their entire decades-long career.

Workers will be punished for being absent no matter what the reason. Every BNSF employee will be assigned 30 points.

Except for vacation days, two points will be deducted for being absent on any day from Monday through Thursday. Three points will be taken away for taking off on a Sunday.

Workers will be fined four points if they don’t come in on Friday or Saturday. Federal holidays are the grand prize. Being sick those days will get a worker seven points.

Many days of overtime will be required to regain any points.

What makes this new policy all the more outrageous is that it’s being pushed through during the COVID-19 pandemic. Over 900,000 people have died of the virus in the United States.

Even the capitalist courts that railroad poor people to jail claim to consider people innocent until proven guilty. The BNSF will automatically penalize workers who “mark off” even if they or their children are ill.

People get sick on holidays, too. Most transportation workers don’t have Monday through Friday work weeks. Neither do millions of workers in hospitals, restaurants and other 24-7 workplaces.

Railroad workers aren’t covered under Social Security. They get benefits from the Railroad Retirement Board instead and have to work 30 years to get the maximum. Some work 40 years or more.

BNSF executives want to be able to fire workers anytime during their careers, even for those with a 25-year good work record. Their new attendance policy will allow them to do it.

Under collective bargaining, such a drastic change in attendance policy is supposed to be subject to negotiation – not just imposed by management.

A union grievance – which on railroads is called a time card – would describe it as being “arbitrary and capricious.” Those words describe BNSF’s dictator-like change of policy.

Federal Judge Mark Pittman, who was appointed by Trump, ruled that unions can’t strike over this issue. That’s also an act of a dictator.

BNSF is one of six giant railroad outfits in the United States and Canada. It operates more than 32,000 miles of track in 28 western and midwestern states as well as British Columbia and Manitoba in Canada.

Yet there are only 35,000 workers that make the system’s trains go from Chicago and Texas to California and the Pacific Northwest. The number of U.S. railroad workers has fallen from 1.5 million in 1947 to just 145,000 today.

That’s a 90% cut in employment. And it’s why billionaire Warren Buffett invested in BNSF, as he told Bloomberg Businessweek magazine in a 2010 interview. The money bags smelled profits from railroads killing over a million jobs.

BNSF is now a subsidiary of Buffett’s Berkshire Hathaway financial empire. With his $114 billion fortune, Buffett doesn’t have to worry about calling in sick.

What does it mean when nearly 1.4 million railroad jobs are destroyed? Hundreds of thousands of Asian, Black, Indigenous and Latinx men and all women were denied a chance to get jobs from which they were excluded. Charles Hamilton Houston, who mentored U.S. Supreme Court Justice Thurgood Marshall, fought court battles against apartheid hiring by railroads.

Hamlet, North Carolina, was an important center of the old Seaboard Railroad. It still has a yard for CSX Transportation, which like BNSF is the result of mergers. Hiring opportunities are slim because of massive job elimination.

Instead of getting railroad jobs, local workers got low-paying jobs at Emmett J. Rowe’s chicken plant. Twenty-five workers were murdered there on Sept. 3, 1991, because of an avoidable fire and locked doors.

Rowe locked the doors because he thought workers, many of whom were Black, would steal chickens. White and Black workers were killed by Rowe’s racism. Eighteen women died. Forty-nine children were orphaned.

Dozens of other railroad towns were devastated. They included Paducah, Kentucky, where the Illinois Central shops were closed, and Livingston, Montana, home to the former Northern Pacific shops.

Thousands of railroad jobs were lost in the New York City area. Among them were workers on the many ferries that used to carry freight cars from Hudson County, New Jersey, to terminals on the west side of Manhattan.

The elimination of these ferries and docks forced more trucks into New York City streets. It allowed luxury housing to be built at Battery Park City on Manhattan’s waterfront. Donald Trump sold condos at Riverside South on top of the former 60th Street yards.

These massive job losses don’t mean railroads are going out of business. In 2018, U.S. railroads carried 13.6 million carloads of freight. Trains carrying shipping containers from seaports are a vital part of the global supply chain.

BNSF isn’t going broke either. In 2019 it collected $5.5 billion in net income, another term for profit.

So why are BNSF and the rest of the railroads increasing their attacks on workers? They want to go back to the days of the 19th century railroad tycoon Jay Gould, who bragged he could hire one-half of the working class to shoot the other half.

Today’s railroad kings want to reduce railroad crews to just one person. Having a one-person crew resulted in the 2013 Lac-Mégantic, Quebec, train wreck in which 47 people were killed.

Instead of attacking workers, BNSF should be paying reparations.

The U.S. Army massacred Indigenous people on behalf of western railroads. General Custer died for the Northern Pacific Railroad, which was one of the rail lines that became the Burlington Northern Santa Fe.

Nine thousand miles of track were built by enslaved Africans in the South before the Civil War. Thousands more miles were built afterwards by imprisoned Black people being used as slave labor.

Among them was John Henry, the “steel-driving man” who was worked to death building the Chesapeake and Ohio Railway, which is now part of CSX.

Railroad monopolies think they can steamroller workers. The 1926 Railroad Labor Act makes it difficult for workers to fight back.

Today’s Congress can’t pass a bill to protect voting rights. But in 1991 it broke the last coast-to-coast strike within 24 hours.

An Amtrak yardmaster told this writer that when he worked for the Norfolk Southern Railway, a trainmaster demanded that he do stretch exercises. It was like the worker was still in kindergarten.

The arrogance displayed by the trainmasters is despised by workers. Union members are demonstrating with their families against the BNSF anti-family policy. Railroad workers will fight back.

The writer is a retired Amtrak worker.