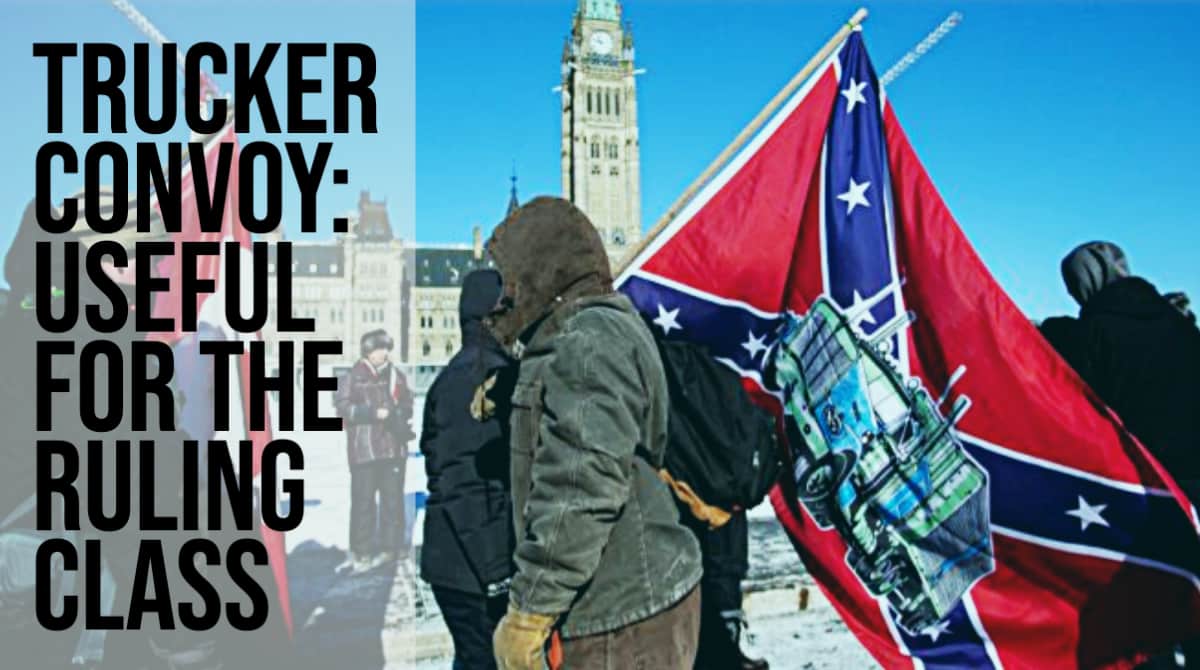 The Communist Party of Canada views the “Freedom Convoy” as a public expression of the increasingly organized and assertive far right. The clear links between the organizers of the convoy and far-right networks indicate that this is not a spontaneous working-class demonstration. On the contrary, it is part of a global phenomenon: the rise and mainstreaming of the far right, which is demonstrated by the strong support (ideologically and financially) from the US far right and circles close to Donald Trump and the Jan. 6 insurrection. The convoy is filled with Nazi and Confederated flags, election signs for Bernier and all sorts of far-right symbols. The $10 million raised through GoFundMe for this convoy also showcases that this was planned by ultra-right networks. It is certainly not the meagre earnings of the working class that is funding this effort.

We understand the frustrations of a growing part of the population. They are justified. Since the beginning of the pandemic, both federal and provincial governments have been busy ensuring that corporate interests are placed firmly ahead of public health. The deaths we mourn from this deadly pandemic are victims of decades of privatization of our public health system. Emergency financial aid programs, whether it be the emergency wage subsidy or the CERB/CRB, have not served to raise the standard of living of working people, but only to barely keep 7 million people afloat. Over 880 000 people were cast adrift last October after CRB was ended. These programs have also benefited big business, big retailers, banks and lending institutions, and real estate speculators. After spending most of the CERB/CRB payments for groceries at Metro, Sobeys or Loblaws (whose CEO’s wealth rose by $4.5 billion after the first year of the pandemic), after paying rent to big real estate speculators such as Timbercreek, after paying off interest on credit cards, not much of the meagre $500 per week was left for people to make ends meet. Just as dangerously, while living and working conditions are deteriorating for the working majority, the government and the political parties in the pay of big business have agreed to increase military spending.

However, these self-proclaimed “spokesmen of the people” refuse to address these questions. They substitute a populist and anti-scientific discourse in order to funnel the anger of the working people towards other workers, particularly immigrants, women, Black and Indigenous People, Muslims, healthcare workers (who’ve been attacked), teachers and other public organizations. Racism, misogyny, violence and hate speech are commonplace in this convoy, which seeks only to divide workers and instill the idea that the enemy is not the bosses, but working people themselves.

This is far from a “freedom” convoy. This is a convoy of hate which has threatened and attacked the civilian populations in Ottawa and everywhere it has passed through.

They don’t say a word about the central issue of defending and expanding our public services, especially our public health care system; about raising wages and controlling the prices of basic necessities; not a word about nationalizing the pharmaceutical industry to stop Big Pharma’s profiteering (which is contributing to the proliferation of variants), about military spending and the danger of war to guarantee corporate profits. Far from attacking the system, they attack the workers struggling to deliver essential services that will save lives, despite systemic underfunding, privatization, and more.

Communists recognize the interests behind this demonstration very well: big business and the far-right (white supremacists, fascists, fundamentalists, the People’s Party, etc.) We know what it means when the far right organizes itself and tries to take root among the unemployed, the unorganized and the bankrupt. We also know that it will take mass political action by the labor and people’s movements to force Parliament to ​legislate hate groups as criminal organizations, to enact and enforce hate speech laws, and to defeat the rise of the ultra-right.

This is why we call on the most conscious workers, the trade union movement, but also on all progressive and democratic forces to block these reactionaries by unmasking them, and to oppose them by fighting for a a genuine people’s recovery that includes: