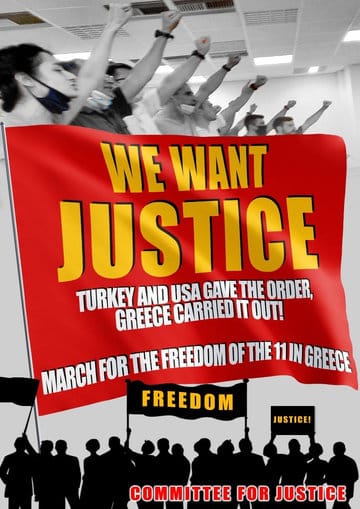 The fascist oligarchy in Turkey and U.S. imperialism ordered and the lackey Greek state carried out the arrests.

Eleven revolutionaries from Turkey were sentenced to a total of 333 years of imprisonment without any evidence against them. The decision was made on behalf of the fascist oligarchy in Turkey and U.S. imperialism.

We will not bow our heads before injustice and unlawfulness!

Our Long March for Justice and Freedom for the 11 revolutionary captives in Greece will commence on Jan. 27, 2022, starting from Germany and then to Ireland, England, Belgium, France, Austria, Switzerland and Italy, and will end in Greece.

Revolutionaries cannot be tried and punished under the pretext of “terrorism.” Being a revolutionary is a historical duty. The real terrorists are imperialists and the fascist states collaborating with them.

With our Long March, we will show that revolutionaries, who have undertaken the most historical and honorable duty in the world, are not alone. We will condemn imperialism and fascism that turned the world into a bloodbath, exploiting the people of the world and condemning them to starvation and poverty.

We are looking forward to the utmost internationalist solidarity of our people and friends and all oppressed-exploited people of the world who live in every country we will pass through.

Internationalism is the most powerful weapon of the peoples against the imperialist looters!

Internationalism is the brotherhood and friendship of peoples!

Let us strengthen international solidarity and common struggle to demand freedom and justice for the 11 revolutionaries in Turkey. Let’s join the Long March and support it.