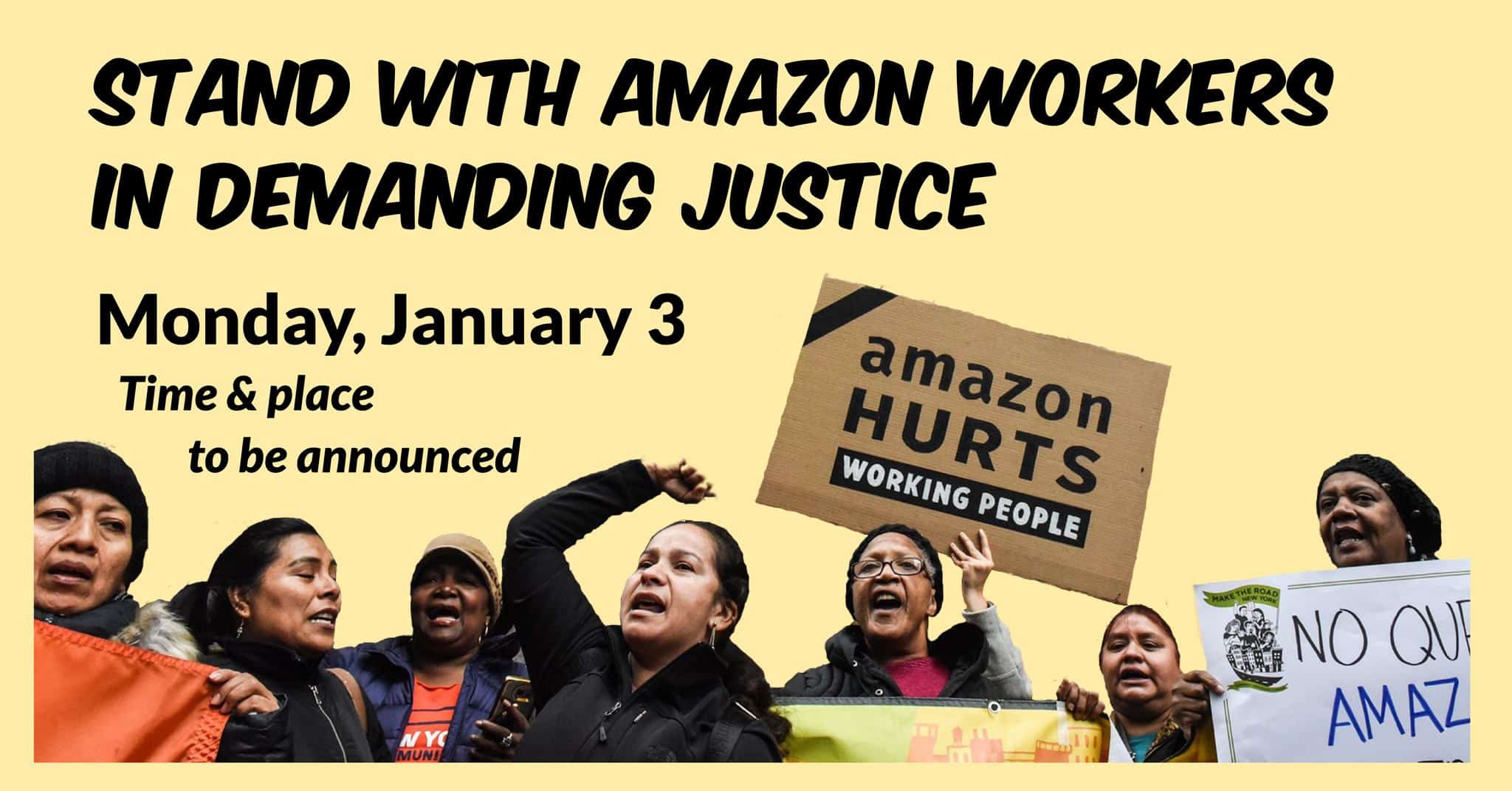 Join us on Monday, Jan. 3 (time & place to be announced) to stand with Amazon workers demanding justice. Local Amazon workers will discuss wage theft and unsafe working conditions, including their demands for change. Amazon made wage promises but still refused to pay.

We will be gathering to show support for local workers in Maryland and Staten Island, Amazon Workers Union, and Bessemer, Alabama, who have been organizing to unionize.

In addition, we have heard firsthand from workers concerned for their health who are demanding mass, regular testing, and better COVID prevention measures. With the recently announced news of COVID positivity rates in Maryland skyrocketing, this is critical for Amazon workers and the community.

The death of six workers at an Amazon warehouse in Edwardsville, Illinois, during a Dec. 10 tornado didn’t have to happen. Instead, workers died because Jeff Bezos was too cheap to build safe buildings.

While the destruction in Illinois received national attention, we note that a tornado struck the Baltimore warehouse several years ago, killing two workers. See Amazon Worker Tells All.

Bezos spends a billion dollars a year on his space toys. Workers’ safety is another matter.

The Edwardsville facility, located 25 miles northeast of St. Louis, was built in a tornado alley. Between 1991 and 2011, four storms roared through the area with at least 136 mph speeds. The Dec. 10 tornado was just as severe.

Like many warehouses, including Walmart, Home Depot, and Target stores, the big-box buildings use “tilt-up wall construction” to save money. Concrete panels weighing dozens of tons are held together by the roof.

The only emergency shelter available to workers in the Amazon warehouse was the bathrooms where a worker was crushed to death. In addition, warehouse workers received virtually no emergency training.

One of the workers who died, Larry Virden, texted his partner that “Amazon won’t let us leave.” He left behind four children.

Lack of concern for workers’ health and safety is a company tradition. For example, fifteen workers collapsed during a 2011 heat wave at an Amazon warehouse in Breinigsville, Pennsylvania, 11 miles from Allentown.

The company knew of the health dangers but refused to reduce the line speed. Amazon instead parked ambulances outside the door.

The Amazon warehouse in Bessemer, Alabama ― where Bezos spent millions to stop a union organizing drive ― is another potential deathtrap. It, too, sits in a tornado alley.