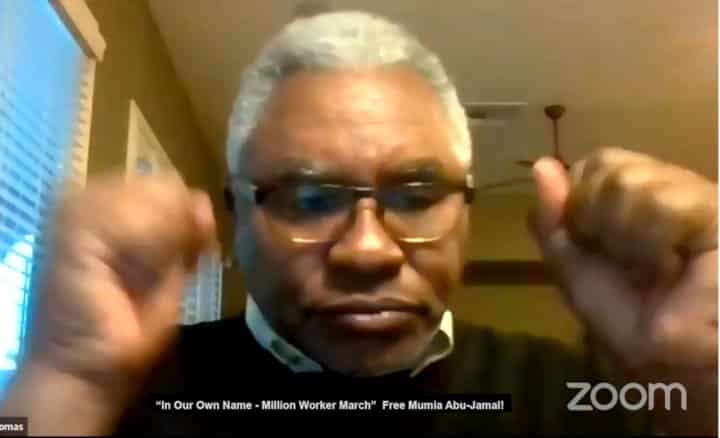 On Dec. 9, the Free Mumia webinar began with a message from political prisoner Mumia Abu-Jamal, who has been unjustly imprisoned in the U.S. for 40 years. Mumia, a journalist who was Minister of Information for the Black Panther Party in Philadelphia before he was framed-up, spoke about the U.S. military-industrial complex. The call was moderated by Gabriel Bryant and Sophia Williams.

Clarence Thomas is a retired rank-and-file union leader who was part ot the International Longshore and Warehouse Union Local 10’s effort to free Mumia for over 30 years. He is also author of the anthology “Mobilizing in Our Own Name: Million Worker March.” As the first speaker, Thomas established the historic roots and breadth of the worldwide campaign to free Mumia and all U.S. political prisoners. There will be a protest in Philadelphia to “Free Mumia!” on Dec. 11.

The International Longshore Warehouse Union (ILWU) has a long tradition of defending oppressed nationalities and political prisoners such as Angela Davis in the 1970s. As a retired member and officer of ILWU Local 10, I have been a part of the Local’s efforts to free Mumia Abu-Jamal and all political prisoners. For more than 30 years, the ILWU has been in the vanguard of the labor movement to free the award-winning journalist, ‘the voice of the voiceless’ and former Black Panther Party member, Mumia Abu-Jamal.

In my recent anthology, “Mobilizing in Our Own Name: Million Worker March,” there are many articles by Mumia that are featured, documenting his support of all labor (organized and unorganized), including ILWU Local 10 and the Million Worker March. Mumia describes himself as “a proud card-carrying member of the National Writers Union which affiliated with the United Auto Workers.” During his forty years of imprisonment, his support for labor and the working class has been unwavering.

During the 1960s, the Black Liberation Movement awakened my political and social consciousness along with countless other Afro-American youth. I joined the Black Panther Party which facilitated my anti-racist, anti-capitalist, and anti-imperialist activism and the need for Afro-Americans to have “self-determination.”
Declaring the Black Panther Party “public enemy number one,” the U.S. government sanctioned the murder of its leaders, vilified the organization in the press, and falsely imprisoned Party members, Mumia Abu-Jamal has always maintained his innocence of the murder of Philadelphia police officer Daniel Faulkner.

There are Black Panther Party members that were a part of the Black Liberation movement who have been languishing in prison for more than half a century. Native American political prisoner Leonard Peltier has been imprisoned since 1977. The horrific imprisonment and the abuse of these political prisoners represent the long legacy of slavery, Jim Crow, apartheid, and racial violence perpetrated against African Americans.

The labor movement can and must play a vital role in the release of all political prisoners. The ILWU recognizes that the prosecution of radical labor leaders such as Tom Mooney and Harry Bridges is directly connected to efforts by the U.S. government to use lies and frame-ups to put away these fighters for freedom and justice that was promised yet denied to African Americans and people of color in the U.S.

The ILWU Longshore Division shut down the entire West Coast in 1999 to demand: “Stop the Execution and Free Mumia!” On June 19 (Juneteenth), 2020, the ILWU shut down all 29 ports on the West Coast including Vancouver, Canada, to commemorate Juneteenth, to End Systemic Racism, and to Stop Police Terror. No maritime cargo was moved for 8 hours on the entire West Coast. This solidarity action on the part of West Coast dockworkers represents the power of labor at the point of production. It is this type of action that labor must find the courage to exercise on a global level to bring home Mumia Abu-Jamal and all political prisoners. 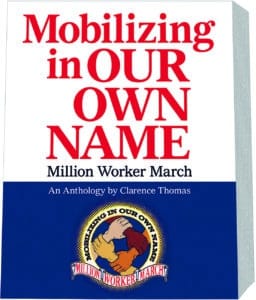 Danny Glover who was a part of the MWM, wrote, “‘Those of us that are activists in the struggle and are contemporaries of my brother and comrade Clarence ‘Buzz’ Thomas, whom I’ve known since our days at San Francisco State, he has done what many of us have talked about but refused to do; write a book! This anthology captures the Million Worker March and so many subsequent struggles that really underscores how ILWU Local 10 continues its long radical history and tradition of struggle. To quote sister Angela Davis, when we both spoke at the Juneteenth 2020 rally at the Port of Oakland, “Whenever the ILWU takes a stand, the world feels the reverberation.”