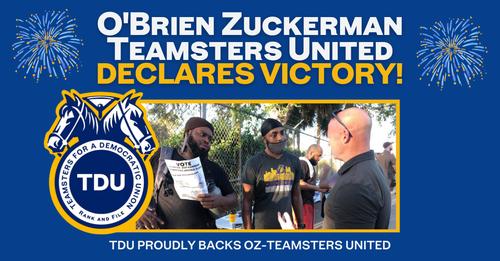 Washington, D.C. — Members of the International Brotherhood of Teamsters (IBT) around the country have much to celebrate. For over two decades, the IBT led by Jimmy Hoffa Jr. did very little to help union members and working people. Instead, the Hoffa Jr. regime busied itself with arranging givebacks to employers and managing the general decline of the Teamsters. Workers represented by the Teamsters saw their contracts become weaker, their union become smaller, and whatever respect they had on the job evaporate.

However, all of that is set to change now that O’Brien-Zuckerman (OZ) and their Teamsters United slate has won the election. After just the first day of counting votes to determine who would lead the Teamsters over the next five years, it became clear that a new chapter was beginning for one of the most important unions in North America.

Teamsters from the U.S. and Canada cast their ballots for International Leadership of the Teamsters throughout October and the first half of November. On November 15, the vote count began in Washington, D.C. Votes were counted by region, beginning with the Southern U.S. and then counting votes cast from the Central, East, West, and Canada. In each region of the United States, Teamsters made their demands for better leadership known, by overwhelmingly voting for Sean O’Brien and Fred Zuckerman’s Teamsters United slate against the old guard leadership. In the South, Central, and East regions, over 70% of the votes went to OZ. In the West, where the old guard was strongest, over 55% of the vote went to OZ. Overall, Teamsters United emerged with a strong victory, earning about 114,000 votes compared to just 57,000 votes. OZ won with almost twice the number of votes, and over 66% of the total votes cast in the election.

Richard Blake from Teamsters Local 512 in Jacksonville, Florida, was invited to help observe the process of counting votes. “The whole facility erupted in cheers when we won the Western Region after previously winning the South, Central, and Eastern regions. We made history and elected an IBT executive board that’s united to take on the employers and fight for the members,” Blake commented.

The rank-and-file membership of the Teamsters sent a clear message – they are ready for the union to fight the employers for stronger contracts and end the age of endless concessions to the bosses. Hoffa Jr. sealed his fate in 2018-2019 when he used a bogus clause in the union’s constitution to approve the UPS contract, despite the membership voting to reject the weak contract three separate times.

Teamsters United had already been organizing the membership to take back their union, and eventually helped remove that bogus clause from the constitution in 2021. Sean O’Brien recognized the critical role that Teamsters for a Democratic Union (TDU) played in removing the clause when he spoke at TDU’s annual convention in October. Teamsters are already gearing up to fight for a strong contract at UPS in 2023.

The Teamsters represent workers in a variety of industries, but regardless of where they work and what they do for a living, Teamsters are fed up with the weak leadership offered by Hoffa Jr. and his handpicked successors. The on-the-ground campaigning done by Teamsters United volunteers around North America was an amazing show and earned tremendous results. Members of TDU did an excellent job helping secure the victory of Teamsters United, as did many rank-and-file members. Every leaflet handed out and every conversation with coworkers mattered. Once again, the working class showed that passion for change can overcome backwards stubbornness.

There’s a long road ahead filled with struggle for Teamsters who want to fight for the working class. The victory of O’Brien-Zuckerman and Teamsters United is a big step in the right direction for unions in North America.