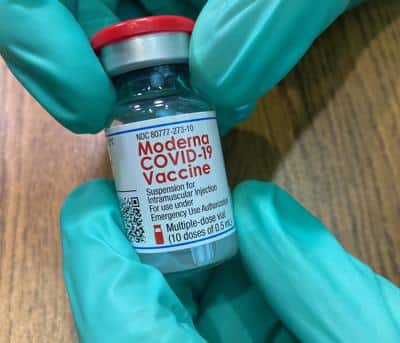 The World Health Organization estimates that 5.1 million people have died of the coronavirus. The Economist magazine claims that the real number of deaths may be three times as many.

Meanwhile Pfizer expects to rake in sales of $36 billion from its covid vaccine in 2021. The collective wealth of Moderna’s three top shareholders―Noubar Afeyan, Robert Langer and Timothy Springer ― ballooned to $12.7 billion because of vaccine sales.

Moderna didn’t create its very effective vaccine by itself. The corporation, which has never brought out a product before, got $1.4 billion from the U.S. government to develop it. Uncle Sam paid Moderna another $8.1 billion for a half-billion doses.

More importantly it was scientists from the National Institutes of Health who helped design the genetic sequence used in Moderna’s vaccine. These NIH scientists were Dr. Kizzmekia Corbett, Dr. Barney Graham and Dr. John Mascola.

Yet when Moderna filed its patent application in July for the vaccine these scientists weren’t mentioned. That’s particularly rotten in the case of Dr. Corbett, a Black woman.

It’s not just a matter of stealing credit. Moderna wanted government money and crucial help from NIH scientists but it didn’t want to share any of the profits.

Moderna has only sold a million vaccine doses to poor countries. It charged the African country of Botswana $29 per dose, a 79% higher price compared with its deal with the U.S. government.

That’s typical behavior for the big drug outfits known as Big Pharma. Every minute BioNTech, Moderna and Pfizer are together collecting $65,000 in profits from their COVID-19 vaccines, according to the People’s Vaccine Alliance.

That amounts to $93.5 million per day. At the same time just one out of fifty people in poor countries have been fully vaccinated.

Patents are legal monopolies that are supposed to encourage innovation. The medical-industrial-complex uses them to jack up prices on life saving medications.

Take the EpiPen, which is a brand name for an injectable device that delivers the drug epinephrine to people suffering a severe allergic reaction. Access to EpiPens can mean the difference between life and death.

Mylan Pharmaceuticals, which later merged with Upjohn to form Viatris, increased the price of EpiPens by over 500% between 2006 and 2016.

Insulin is a life saving medication for millions of people with diabetes. The Canadian Dr. Frederick Banting discovered insulin along with James Collip and Charles Best in 1923.

Banting refused to put his name on the patent for insulin. He wrote that “insulin does not belong to me, it belongs to the world.” Banting’s two co-discoverers sold the insulin patent to the University of Toronto for one dollar.

That doesn’t prevent the drug outfits from increasing the average annual cost of insulin of over 15% since 2012. That’s an increase of three and a half times in nine years.

By 2016 the average monthly cost of insulin had risen to $450 per month. As a result one in four people using insulin have reduced their dosage. That’s why Minneapolis restaurant worker Alec Smith died in 2018 because he couldn’t afford insulin’s high cost.

It isn’t just insulin that’s overpriced. The communist activist David Schechter, a former math teacher and computer programmer, suffered a stroke because he couldn’t afford his medication. He died eight years later in 2014.

The failure to vaccinate billions of people in Africa, Asia and Latin America has allowed the coronavirus to mutate into the more spreadable Delta variant. In a world of jet planes and global supply chains, everyone has to be able to be vaccinated.

Cuba and China want to do that. These socialist countries are sharing their vaccines with the rest of the world while capitalist Big Pharma is stalling.

Patents need to be shared and new vaccine plants need to be built in Africa. Don’t count on the U.S. government to do so voluntarily.

The Al-Shifa pharmaceutical plant in Sudan was destroyed in 1998 by a U.S. cruise missile. This was the largest medicine factory in Africa and could have produced millions of vaccine doses.

However, when Uncle Sam needed more aluminum for its airplanes in World War II, it broke Alcoa’s monopoly on the metal. That’s despite the billionaire Mellon dynasty controlling the company. The U.S. Senate Defense Committee and Secretary of the Interior Harold Ickes advocated taking over Alcoa.

In a world of nearly 8 billion people, the Biden Administration’s plan to produce a billion more vaccine doses by the end of 2022 isn’t enough. To defeat COVID-19, the power of the people has to be mobilized to smash the greed of Big Pharma and take over their patents.