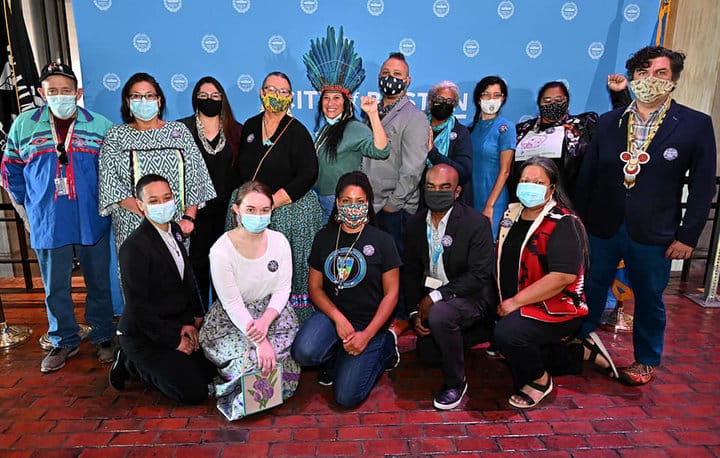 Oct. 6 — The Acting Mayor of Boston, Kim Janey, has today signed an Executive Order declaring that the second Monday in October will be Indigenous Peoples Day in the City of Boston, replacing Columbus Day and setting out a roadmap for future administrations to improve relations with Indigenous tribes and organizations.

“We are happy to see the City of Boston take the important step of recognizing and celebrating Indigenous peoples in Boston, the Americas and around the world. Many thanks to Mayor Janey and the many members of her administration who worked with the Indigenous community to make this happen.”

Kimimilasha James, an Aquinnah Wampanoag youth leader with United American Indians of New England (UAINE), said: “As someone who was born in Boston but never felt that Indigenous people were welcomed by the city government, I am very happy about Mayor Janey’s actions today. Indigenous Peoples Day brings a positive message about Indigenous survival and resilience in the face of genocidal actions directed against Indigenous peoples since 1492. It’s a day to learn about and celebrate Indigenous history and contemporary Indigenous peoples and cultures.

“And it is just a first step for the city to begin to build relationships with Indigenous people and begin to address the many injustices faced by Indigenous people here in Boston and elsewhere. It is time for us to stop being largely ignored and erased.”

Gloria Colon, outreach coordinator for the North American Indian Center of Boston (NAICOB), said: “As a First Nation Migmaw mother, I am pleased that the city of Boston is honoring Indigenous Peoples Day. Growing up in Dorchester I experienced racism, I was targeted just for being Indigenous. While our city still has work to do to make all people safe, it is important that Indigenous children are appreciated and included.”

Mahtowin Munro (Lakota) from United American Indians of New England and the statewide Indigenous Peoples Day campaign (IndigenousPeoplesDayMA.org) said, “We have been working for several years to get Boston to properly acknowledge and be in relationship with Indigenous nations and people here.”

She continued: “We wish to thank Mayor Janey and her staff for listening to the concerns of Indigenous people in the city and for her expressed commitment to Indigenous sovereignty and racial justice for Indigenous peoples in the Boston area. She and her staff have set an example as well by thoughtfully consulting and considering future steps that need to be taken by the city. We are elated that she has declared Oct. 11, 2021, to be Indigenous Peoples Day in the City of Boston.”

Raquel Halsey, member of the Mandan, Hidatsa and Arikara Nation and executive director of NAICOB, said: “I’m so proud to have a mayor who listens to the community and works to make Boston an inclusive city. As a service provider, we have heard countless stories of Indigenous people feeling unwelcome in Boston, and they have felt the lasting consequences of genocide and colonialism every day.

“Recognizing Indigenous Peoples Day is an important step toward addressing the lived experiences of many residents and building trust between municipalities and Indigenous nations.”

Jean-Luc Pierite, member of the Tunica-Biloxi Tribe, president of NAICOB and member of the executive committee of the Black Mass. Coalition, said: “We must commend the tribal leaders, Indigenous activists and the City of Boston’s internal working group for their dedication towards the action steps to enable the health and wellness of our community members. NAICOB, following our over 50-year tradition and commitment to the New England Native American community, looks forward to being a partner in ensuring improved government-to-government relationships.”

For decades, Indigenous people have been calling for an end to the public celebration of Christopher Columbus. They have also asked that Indigenous Peoples Day, a day to honor Indigenous peoples from throughout the Americas, replace Columbus Day on the second Monday in October because of the date’s significance. They consider it a first step toward recognizing the genocide of millions of Indigenous people and the theft of their lands that began with the arrival of Columbus. It is a meaningful symbolic gesture in addressing the pain caused to Native Peoples by the many years of public celebrations of Columbus as a hero.

An increasing number of towns, cities and states around the U.S. are now celebrating Indigenous peoples instead of Columbus on this day.

Mayor Janey also acknowledged that Boston is located on the land of the Massachusett Tribe.