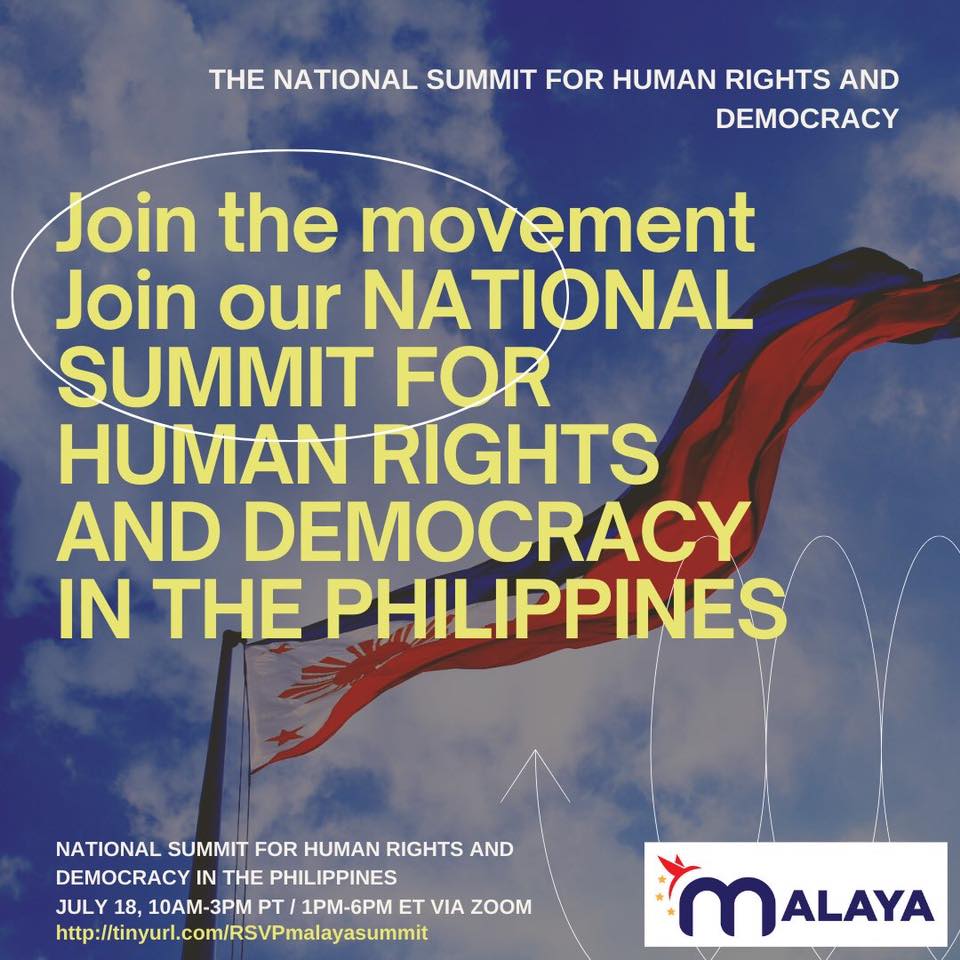 We would like to invite you to the National Summit for Human Rights and Democracy in the Philippines this September 18, 10am-3pm PT / 1pm-6pm ET via zoom. The National Summit aims to bring together all individuals and organizations who care about human rights, democracy and sovereignty in the Philippines together and build unities towards ensuring the end of the Duterte regime.

With less than one year left in office, the fascist Duterte regime is growing even more desperate to cling to power. Duterte is actively maneuvering to circumvent the constitutional limitations on presidential term by running for Vice President. Meanwhile, human rights violations continue and attacks against activists escalate. The Philippines is at its worst economic situation since World War 2. Persistent attacks on progressive groups with the Anti-Terror Law. Growing number of political prisoners. Assassination of human rights defenders, activists, and peace panel members. The list of Duterte’s crimes against the Filipino people goes on.

We’ve witnessed the rise of a fascist dictator over the past 5 years, and with one year left in Duterte’s term, it is necessary that we come together as concerned overseas Filipinos and allies. As a dedicated defender of human rights and democracy in the Philippines, we invite you to attend the virtual Malaya Movement National Summit on September 18. The National Summit will be an opportunity to learn about the worsening situation in the Philippines, and to unite on ways to collectively take action in this critical election year from abroad.

The National Summit will feature keynote speakers and messages from the Philippines and the United States, as well panels and workshops covering a variety of issues and campaigns from different organizations. It will be held via ZOOM. Register today and invite your friends and family!

If your organization would like to co-sponsor the National Summit, please send malayamovement@gmail.com an email! If you are unable to attend the National Summit but would still like to support, you can donate here: tinyurl.com/donatemalayasummit