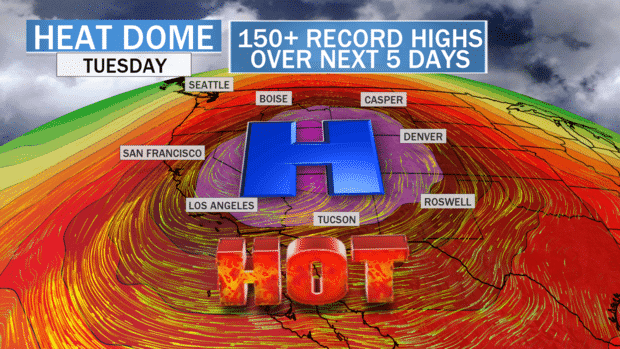 Climate scientists around the world are alarmed by a triple climate-change-related crisis that hit the western U.S. and Canada in June and July.

Normally climatologists are careful in their assessment of extreme weather events, under pressure from energy industry profiteers and anti-science climate change deniers. They go to great pains to avoid being accused of exaggeration, and rarely (really never) point to climate change as the cause of specific freakish weather events.

The severity of what has happened in June and July has pushed past many of their carefully calculated projections. The fingerprints of capitalist-induced global warming are all over the crime scene.

A severe drought in the western states of the U.S. that has been worsening for months has nearly drained Lake Mead in Nevada, Lake Oroville in California and other major reservoirs, threatening power generation for millions of people. A series of intense, widespread, sustained heat waves tortured a quarter of the U.S. as well as western Canada for weeks, taking the lives of hundreds of people.

The super-dry conditions in the region have caused 83 wildfires, including the Dixie Fire in northern California and the Bootleg Fire in southern Oregon. They are two of the largest wildfires in history and are both still raging.

The southwest U.S. is no stranger to deadly heat, but what is most unexpected is that this extreme heat has hit the Pacific Northwest, a region known for mild temperatures and damp weather.

Roads buckled in Seattle from the sweltering heat. For several days Portland, Ore., was the fourth-hottest place on earth. British Columbia suffered the highest death toll with more than 800 deaths between the end of June and middle of July — quadruple the average number of deaths.

The village of Lytton in British Columbia burned to the ground just as Paradise, Calif., did in 2018 — essentially nothing left but ashes and smoke.

In Canada’s British Columbia province, and the U.S. states of Washington, Oregon and northern California, the heat broke all-time temperature records, and then broke those records again, and then again.

Nevada and California’s livability depends on a system of 1,500 human-made reservoirs, not only for drinking water and agriculture but for electricity from hydroelectric generators.

Engineers say that the water level in Lake Mead will be below the minimum water level needed to generate power to 1.3 million people in a matter of days. Lake Oroville will likely last until September, when it won’t be able to supply electricity for another 800,000.

Normally, power companies buy power from nearby regions when needed. But constantly running air conditioning in a wide swath of the western U.S. during 2021 has diminished power surpluses that normally allow that to happen.

All told, the fires have burned 1.3 million acres — an area larger than Los Angeles, New York City and Chicago combined. The smoke has journeyed cross-country to the East Coast, prompting air quality warnings along the northern part of the Eastern Seaboard and as far inland as central Virginia.

Thirty-eight-year-old Sebastián Francisco Pérez from Guatemala was working at an Oregon tree farm on June 26 when he collapsed and died from the heat. The Bureau of Labor Statistics reports that 53 agricultural workers died from heat nationwide in 2019, but this was the first in Oregon directly attributable to heat.

Only four states have laws in place to protect farmworkers. Oregon became the third after the death of Sebastián. Washington State quickly followed with some emergency measures. Some other states merely have “guidelines.”

Irene Ruiz, an environmental justice organizer from Boise, Idaho, messaged Struggle-La Lucha about the heightened danger to agricultural workers during heatwaves. “Guidelines are not enough. These are the people who put food on our tables and are the most affected and in danger of extreme heat.”

The opposing narrative, motivated by energy profiteers, is that the warming of the atmosphere during this period is a natural cycle, that it has happened before over the millennia, and that it will pass.

But a scientific paper published in the journal Nature on July 28 referenced two large, decades-long studies of the Earth’s “energy balance” — the amount of the sun’s energy entering Earth’s atmosphere compared to the amount of energy reflected back out into space. Both studies confirm that greenhouse gases are keeping the sun’s energy trapped in our atmosphere.

The paper asserts that there is less than a 1% chance that the rise in global temperatures and all of its frightening consequences are a natural occurrence.

Greenhouse gases began to heat the atmosphere with the dawn of industrial capitalism in the latter part of the 19th century. That much is readily admitted in the capitalist press these days. What isn’t written about enough is the role of imperialist domination in this crisis for humanity.

The machinery of war is the greatest consumer of oil, and like a dog chasing its tail, pollutes the world while fighting to control oil markets. If the U.S. military machine were to be ranked in the list of countries that indicates how much they contribute to pollutants that heat the atmosphere, the list would show it ahead of 46 countries.

Estimates of the cost of stopping global warming vary from $300 billion to Forbes Magazine’s price tag of $50 trillion. Underdevelopment and poverty have been imposed on much of the world by imperialist military force and economic leverage for more than a century. The stolen wealth is now concentrated in the hands of the tiny group of billionaires that have profited immensely — as a class — from the control of oil markets. That stolen wealth is key to mitigating climate change.

The world is being told to put its faith in international agreements to solve the crisis. The Paris Climate Agreement is supposed to oblige each participating country to limit greenhouse gases and commit rich nations — and in some cases private corporations — to help fund efforts by poor nations with $100 billion per year in grants, loans and other forms of financing, to help them switch to clean energy.

That agreement still shifts the blame to the poorest countries, when in fact 20 industrialized countries are responsible for 78% of greenhouse gases.

Historically, no country has put more carbon dioxide into the air than the imperialist U.S. empire. The ultimate goal of the Paris Agreement is to limit greenhouse gases to a 2% increase per year, and “if possible” to 1.5% per year. As of today, the rich countries haven’t come up with the first $100 billion that was due in 2018.

Capitalism is a roadblock on the path to mitigating this huge crisis for humankind. It will take a global environmental movement that is revolutionary — conscious of the need to eradicate imperialism — to stop the crisis of global warming and climate change.