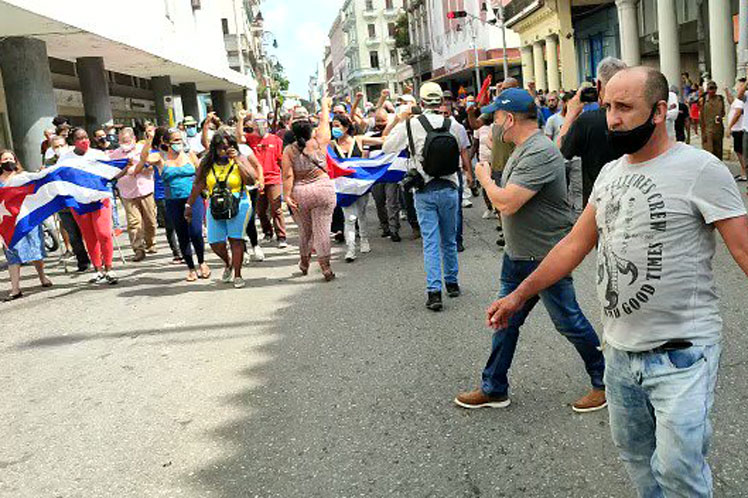 Havana, July 11 (Prensa Latina) Cubans came out to march in Havana in support of the Government and the revolution after President Miguel Diaz-Canel addressed the nation in a radio television hook-up, calling on the people to defend the country’s streets in the face of intensified destabilization and subversion actions.

Cuban Foreign Minister Bruno Rodriguez shared through his Twitter account a video showing citizens in the Centro Habana municipality marching with Cuban flags and chanting in support of the Government and in rejection of the destabilizing incidents that took place this Sunday in some localities.

‘The people are mobilizing in the face of imperialism’s campaign against Cuba’, wrote the Foreign Minister, adding that international solidarity and Cubans living abroad are organizing support for the island.

Cuban President Miguel Díaz-Canel, in a televised appearance, summoned all revolutionaries to take to the streets in defense of the Revolution, wherever there is an attempt to generate disorder, and to confront them with decision and firmness.

The president himself went this Sunday, together with other leaders of the Communist Party of Cuba and the Government, to the town of San Antonio de los Baños, south of Havana, where a group of people, encouraged by media campaigns from the US, gathered in the town main square.

The head of state talked to the local population about their concerns and dissatisfactions, and then they marched along several streets of the small town.

‘We will not allow any sold-out counterrevolutionary, who receives money from US agencies, to provoke destabilization in Cuba, Diaz-Canel stressed on national television.