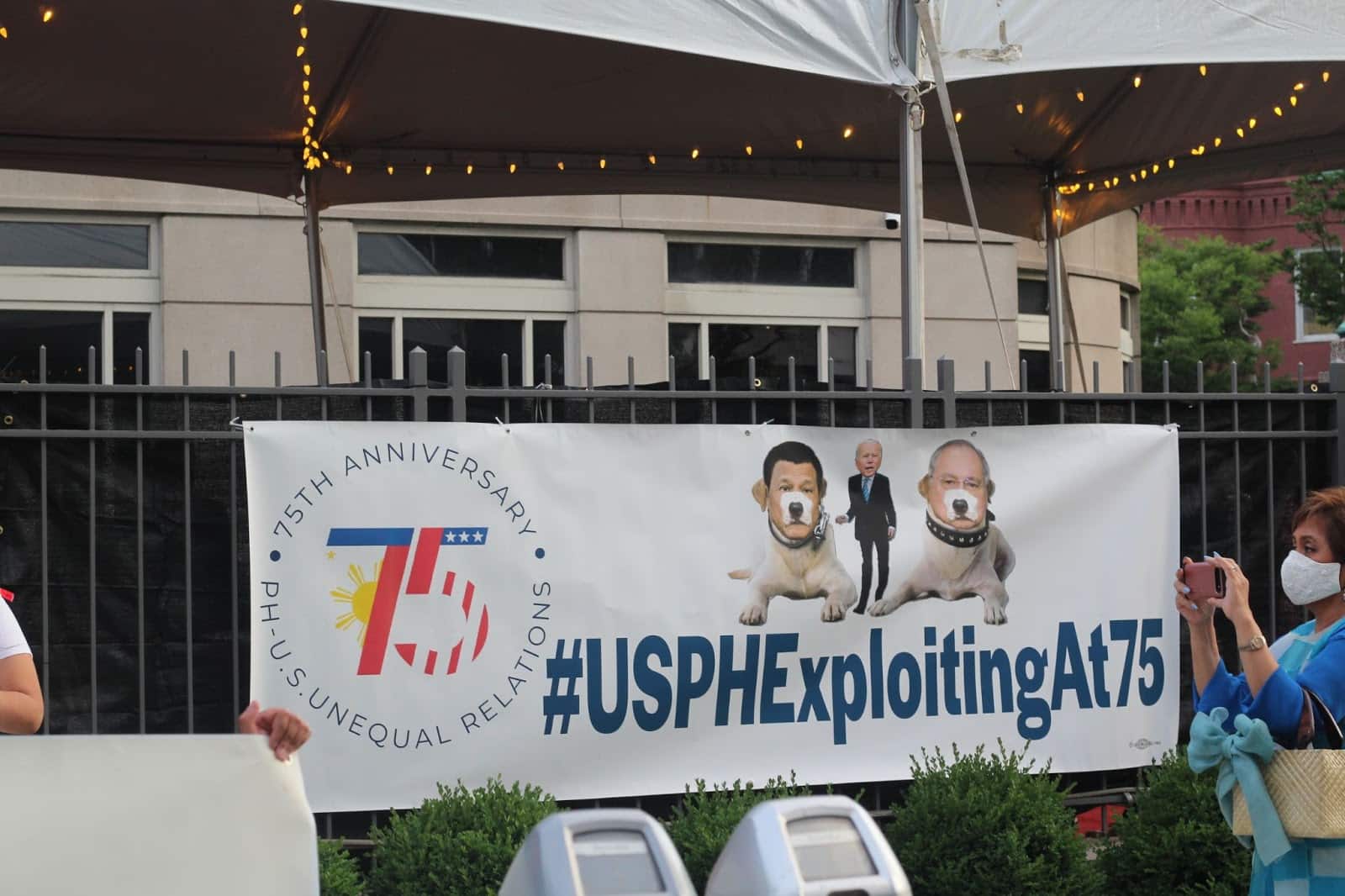 Washington, D.C. — About 50 Filipino-American activists and solidarity allies throughout the metropolitan area staged a protest and program in front of the Philippine Embassy on June 15 to counter Ambassador Jose Romualdez’s reception dinner celebrating 75 years of “thriving Philippine-United States relations.”

The protest was held to emphasize the unequal and exploitative relations of the U.S. and the Philippines, and to highlight the atrocities that the Philippine government has committed against its citizens. The protesters also expressed their anger over the contrast between the lavish reception hosted by the ambassador and the ordeal of Filipinos back home and across the diaspora suffering from hunger and COVID-19.

Calls for support of the Philippine Human Rights Act (PHRA), which was reintroduced to the U.S. House of Representatives on June 14 by Rep. Susan Wild, were made throughout the night. The PHRA is a response to the human-rights violations and extrajudicial killings committed by the Duterte administration.

The bill calls for the suspension of U.S. military and police aid to the Philippine government until human-rights violations cease and responsible state forces are held accountable.

After the activists conducted a noise barrage to assert their presence, CJ of Anakbayan D.C. and Rob from Katarungan kicked off the night with a punk rendition of “Muog na Buo” (“Solid Fortress”) as the crowd cheered on and continued to make noise, forcing the embassy to move its lavish dinner inside.

Throughout the protest, there were other cultural performances by Luci of the Poor People’s Campaign and QTPOC activist-singer-songwriter Black Assets.

GABRIELA D.C.’s Jo and Kai Kai performed a spoken-word piece remembering those targeted and murdered by the Filipino government, and to honor those who continue to fight and lead the movement towards victory: “The youngest Drug War victims, the families who lost their loved ones, urban poor women and youth, [Philippine National Police] shot them dead! Let us not forget.”

“We challenge you to listen to the screams and cries of the Filipino people. We call for an end to U.S. military aid, murdering our people under the fascist Duterte regime. And ultimately — we call for true democracy and liberation of the Philippines, at home and abroad!”

Catherisa from Katarungan, a grassroots solidarity organization, spoke about the indigenous population of Mindanao known as the Lumad: “Earlier this month, a group of Lumad students were coerced by the Philippine military to demolish their own school under threat of arrest.

“In addition to countless fake rescue operations and terrorist accusations, it is clear that the government demonizes the Lumad to justify their actions. But we know the truth. And it is our responsibility to advocate and spread the truth in the face of government and media corruption.”

Colectivo Kawsay’s Marian emphasized the importance of international solidarity, as she spoke about Latin America-U.S. relations: “By providing military aid and supporting puppet leaders, the U.S. continues to destabilize our home countries while criminalizing us when we try to migrate here.”

A representative from Pan-African Community Action was not able to make it to the event, but shared a message of solidarity with those there that night: “Our conditions will not change unless we organize to build community-led power, to advance our human rights, to create informed consent and self-determination.”

Posters 4 Government, also known as Johnny, shared a heart-wrenching story of a couple who were murdered by the Philippine government for setting up mutual aid efforts to feed the community. “Duterte and Ambassador Romualdez are guilty in the unlawful killings of over 30,000 people … [The War on Drugs] is an absurd lie that’s being used to kill off opposition.”

Rasha from the Palestinian Youth Movement, a collection of Arab youth fighting for the liberation of their land and all lands, spoke about the systems that perpetuate the need to fight: “The struggle of the Philippines is a product of centuries of colonization, feudalism, and, in its current iteration, imperialism.

“We stand unequivocally against all of these systems and demand the total dismantlement of U.S. imperialism and capitalism globally.”

Jhong, coordinator for BAYAN USA in the DMV region, closed the night with a message addressed to the U.S.: “We are not your little brown brother, but a sovereign nation struggling to be free. By enabling, strengthening and celebrating these relations, Duterte’s brutality and betrayal of the nation worsens with each passing day.”

The powerful collective effort of progressive Filipino organizations and solidarity allies blossomed into a successful and meaningful protest, forcing Ambassador Romualdez’s reception to end early as the VIP guests filed out of the building escorted by D.C. Metro Police and Secret Service.