Thousands of people marched through the streets of Queens from Sunnyside to Astoria Saturday afternoon in support of Palestinians.

Within Our Lifetime – a Palestinian-led community organization that also held a large rally in Bay Ridge last week – organized the event, which began at Queens Boulevard and 46th Street.

Saturday’s march came just days after Israel and Hamas agreed to a ceasefire that ended more than 10 days of violence and bloodshed in the decades-long conflict. More than 230 Palestinians — including over 60 children — have been killed in Israeli airstrikes and 12 Israelis died in rocket attacks launched by Hamas, the New York Times reported.

In Queens, demonstrators initially gathered underneath the No. 7 train station at 46th Street – just steps from the Sunnyside Arch. Many wore keffiyehs – black and white checkered scarves –that symbolize Palestinian nationalism.

Thousands participated in a rally in Sunnyside Saturday in a display of solidarity for the Palestinians pic.twitter.com/xAomcZZrtQ

Following a prayer for Muslim attendees, organizers led more than a dozen of chant. “Not another nickel, not another dime, no more money for Israel’s crimes,” one rally leader bellowed into a loudspeaker, as attendees repeated. Other chants included ‘Hey, Hey, Ho, Ho, Zionism has got to go’ and ‘Resistance is justified when people are colonized.’

Supporters flocked to the event from Queens and beyond – with many like Brooklyn resident Farhana Akther saying that they chose to attend to show solidarity with Palestinians.

Many were from the world’s borough.

“We love them and support them,” said Jamaica resident Kazi Fuzie. “We want to ask the government to stop spending our tax dollars to fund Israel.” She called on federal officials to redirect funding to domestic issues like education and housing.

Attendees also included members of Neturei Karta, a group of Orthodox Jewish people who opposed the State of Israel, as well as representatives from the December 12th Movement, a Black human rights organization based in New York City.

Demonstrators carried Palestinian flags and signs with a variety of messages – such as “From the River to the Sea, Palestine will be Free,” “No Peace on Stolen Land,” and “Never Again Means Freedom for All – Jews for Palestine.”

Some carried the flags of Morocco, Bangladesh, Algeria, Turkey and Iraq, and others shared messages of support from other countries – such as one woman who held a “Bosnians for Palestine” sign and another attendee who carried a poster that read, “Afghans 4 Palestine.”

A handful of supporters addressed the crowd before the group began its march. Two related the situation in Palestine with that in Colombia, where at least 42 people have been killed in recent weeks during anti-government protests.

“So we have to be connecting with each other’s struggles – right here in the belly of the beast,” said Yhamir Chabur. “Colombia’s liberation is connected with Palestine’s liberation.”

Demonstrators also likened support for Palestine to that for Black Lives Matter and indigenous peoples.

Once the march began, a UHaul pickup truck led the way as several organizers stood atop the vehicle and waved Palestinian flags. Participants first proceeded west on Queens Boulevard then headed north on 39th Street into Astoria. Passing cars that honked in support were met with rounds of cheers.

One attendee said she had expected that the Queens event would be smaller than others held in Brooklyn. “The turnout is actually impressive,” she said.

Khan recalled a prior rally for Palestine held in Jackson Heights in 2014, and said Saturday’s event drew a significantly larger crowd. ‘This has been a big accomplishment,” she said.

The Sunnyside march was one of more than 90 events across the United States planned for this weekend. Demonstrators are expected to gather again in Queens – in Astoria Park – on Sunday, May 30 at 4 p.m. 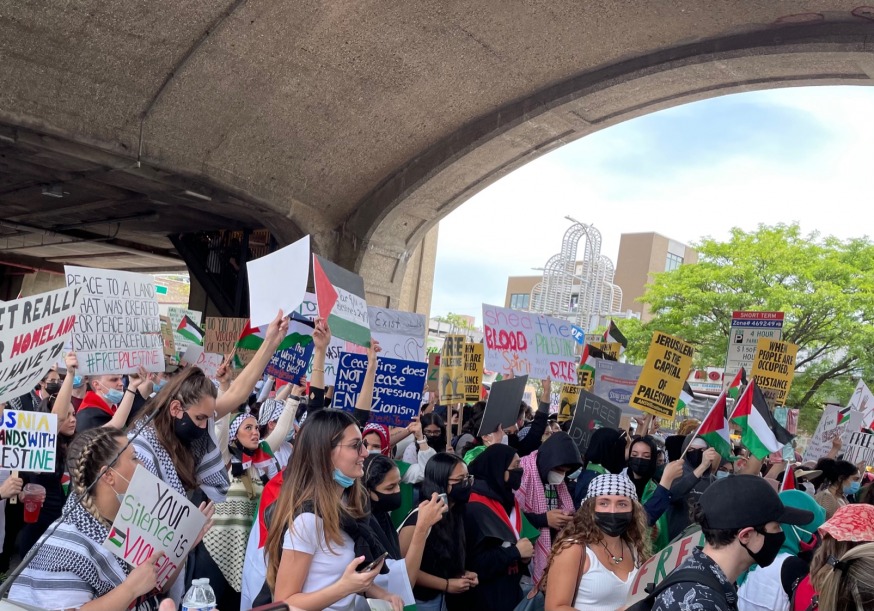