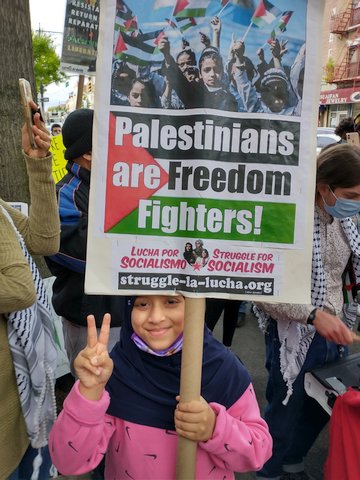 Hundreds of people rallied in the Bay Ridge neighborhood of Brooklyn, N.Y., on May 8 to denounce the latest atrocities against the Palestinian people. Mobs of Zionist settlers screaming “death to Arabs” are trying to drive Palestinians out of the Sheikh Jarrah neighborhood in Al-Quds, the capital of Palestine.

The day before, 80,000 Palestinians gathered in the city, also known as Jerusalem, for the last Friday of Ramadan, despite the racist attacks.

The demonstration was called by Within Our Lifetime-United for Palestine. It was supported by American Muslims for Palestine, Al Awda NY-Palestine Right to Return Coalition, Samidoun Palestinian Prisoners Solidarity Network and other members of NY4Palestine coalition. The rally was held on Brooklyn’s Fifth Avenue, lined with Palestinian shops. Drivers going by honked their horns in support.

People chanted, “We don’t want two states, we want ‘48!” The powerful slogan means all of Palestine belongs to the Palestinian people. It rejects phony peace plans that allow for a settler presence.

The old apartheid regime in South Africa also called for a “two-state solution” that was rightfully rejected by Nelson Mandela and the African National Congress. Palestinian people are forced to live in ghettos like the Bantustans that existed in South Africa.

Among the speakers at the rally was Nerdeen Kiswani from Within Our Lifetime, who pointed out how the Zionist settler colony occupying Palestine gets over $10 million a day from its masters on Wall Street and the Pentagon. She emphasized the viciousness of the racist mobs attacking Palestinians during the holy month of Ramadan.

Kiswani herself has been the target of Zionist organizations. She spoke of how Palestinians in Al-Quds double and triple check that their doors are locked so settlers don’t seize their home.

Longtime Palestinian activist and human rights attorney Lamis Deek spoke of the courage of Palestinian people, particularly the youth. Other speakers represented the Black Alliance for Peace and Jews for Palestinian Right of Return.

People were urged to return to Bay Ridge on May 15, the 73rd anniversary of the catastrophe called Al-Nakba. That’s when hundreds of Palestinians were killed and hundreds of thousands of people were driven out of their homes by Zionist settlers in 1948.