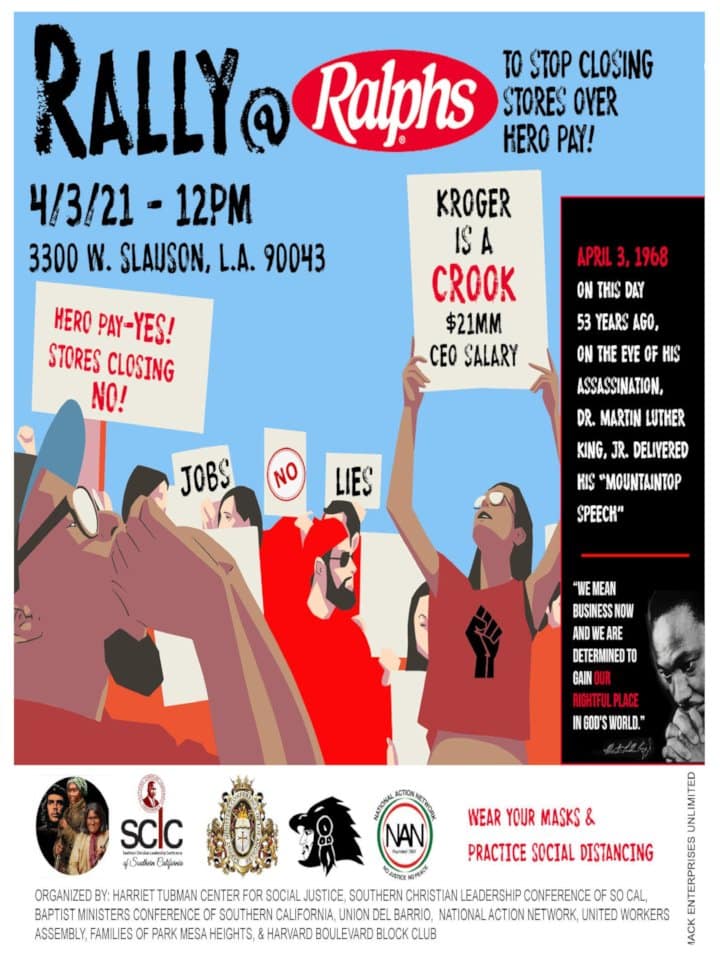 Los Angeles — On April 3rd, community organizations will unite to protest against Kroger closing 3 stores in the LA county and 2 in Long Beach over the City Council’s emergency ordinance, which provides all national retail and drug store employees a $5 raise, expiring in July. The two Ralphs and a Food 4 Less in LA will be closing on May 15th, impacting 250 workers, their families and the surrounding communities. The lack of accountability in grocery chains negligence towards their employees have resulted in thousands of workers being infected by COVID and hundreds of deaths.

Kroger has stated the small raise to the workers will somehow end their ability to operate, yet Kroger’s profits have increased by 56% to $2.6 billion and its sales by 14% to $120.8 billion during the pandemic.

Essential frontline workers across the globe have risked their lives during the pandemic, with many national grocers gaining all time profit margins. “After 32 yrs working in this store, I see It’s all about greed, it’s never enough! Kroger keep this store going! Don’t shut it down, people need jobs! Hazard pay is a blessing for me!” stated Ronald Ford, a UFCW local 770 worker.

The rally will be held at one of the Ralphs stores set to close on 3300 Slauson Ave, Los Angeles, CA, demanding Kroger take back their announcement to close these crucial stores that supply fresh and accessible food to low income communities including the elderly and those who rely on public transportation. With the community outraged, many worry if the store locations will be replaced with an affordable grocer or at all. An already 12% increase in homelessness as of 2020 has also raised concerns that these locations will become hotspots for food deserts that are sweeping across LA county. These communities have struggled in the past with finding affordable prices and costs that can be covered from food stamps.

Commencement of the rally will begin at 12pm PST, with organization leaders and workers of Kroger speaking out against this attack and calling for solidarity at 1pm PST. The chosen date for the demonstration also sheds light to its historic significance in Dr. Martin Luther King Jr.’s final speech “I’ve Been to the Mountaintop” to a crowd of 25,000 work, igniting the sanitation workers strike and expanding the civil rights movement. King affirmed the value of the sanitation workers’ labor, saying, “Secondly, let us keep the issues where they are. The issue is injustice. The issue is the refusal of Memphis to be fair and honest in its dealings with its public servants, who happen to be sanitation workers.” The coalition organizations consist of the following and demand all frontline workers be paid a living wage NOW: Harriet Tubman Center for Social Justice, Southern Christian Leadership Conference of SoCal, UFCW Local 770, Baptist Ministers Conference of SoCal, Union Del Barrio, Community Coalition, National Action Network, United Workers Assembly, Families of Park Mesa Heights, and Harvard Boulevard Block Club.