More than a hundred people gathered outside Pfizer’s midtown Manhattan headquarters on March 11 to demand the drug company provide its COVID-19 vaccine to poor countries.

Under current schedules, it won’t be until 2024 that most people in Africa, Latin America and South Asia will be vaccinated. That’s because Big Pharma outfits like Pfizer think it’s not profitable enough to do so sooner. Last year Pfizer had a net income of $9.6 billion.

Speakers said the unavailability of vaccines was a death sentence for the poor. Among them was Dr. Roona Ray, a family physician and supporter of Physicians for a National Health Program.

The delayed rollout of vaccines for countries made poor by global capitalism threatens  everyone’s health. Rally participants pointed out that “no one is safe until everyone is safe.”

Members of ACT-UP and other organizations came to the noontime rally, held two blocks from United Nations headquarters.

While Pfizer rolls in the profits, socialist Cuba is preparing to manufacture 100 million nonprofit vaccine doses. Before 1959, when Cuba was a sugar colony for Wall Street, the country wasn’t even able to make an aspirin. 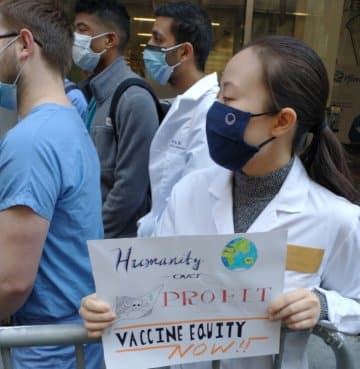