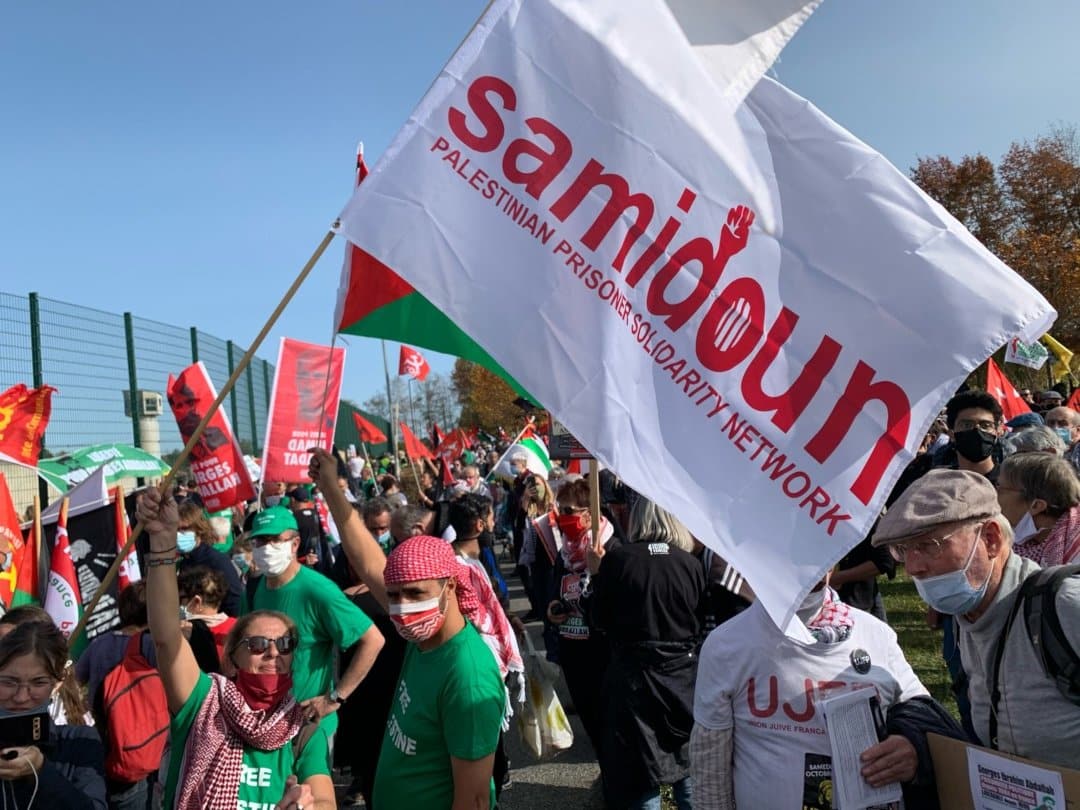 In response to Israeli Defense Minister and war criminal Benny Gantz’s designation of Samidoun as a “terrorist organization”, Samidoun Palestinian Prisoner Solidarity Network affirms that we will continue to organize and mobilize internationally in defense of Palestinian rights and liberation. This is the latest manifestation of a smear campaign that is intended to silence international support for the Palestinian people and especially the nearly 5,000 Palestinians jailed by the Israeli occupation. This is an attack on the Palestinian prisoners’ movement as well as the right of Palestinians in exile and diaspora to organize. We affirm that we will not be silenced or deterred by Israel’s smear campaigns.

The Israeli allegations are replete with false, misleading and careless allegations, beginning with listing an incorrect date for the founding of Samidoun (we actually mark our 10-year anniversary this year, in 2021, as is easily learned from our website). Palestinian writer Khaled Barakat has expressed his support for Samidoun’s work on multiple occasions, and we are proud to share his writings and thoughts. However, Israel’s complete disregard for facts once again comes into play here: Khaled Barakat is not now, nor has he ever been, a director or “chief coordinator” of Samidoun.

We are a grassroots organization with no paid full-time staff and that does not fundraise for any organization except for sustaining our advocacy campaigns. We have chapters in the US, Canada, Germany, the Netherlands, Spain, Sweden, Brazil, Greece and occupied Palestine, and a network of member organizations including the Collectif Palestine Vaincra in France. This is a blatant attempt to disrupt and undermine this growing mobilization of support for Palestine around the world.

We conduct our work openly, visibly and publicly, as is visible at our website, samidoun.net, and we are proud to call for the freedom of Palestinian political prisoners like Ahmad Sa’adat, Khalida Jarrar, and thousands of Palestinians of diverse political backgrounds. The entire Israeli campaign is based on a complete disregard for facts and reality.

In fact, most of the listed points appear to come directly from right-wing propaganda organization NGO Monitor, which aims to shield Israel from international accountability for war crimes by smearing human rights defenders in Palestine and around the world./ NGO Monitor’s “baseless claims and factual inaccuracies” are a long-standing feature of their defense of Israeli apartheid, extrajudicial killings, land confiscation, arbitrary detention, military occupation, siege and colonialism.

Samidoun is an independent international, Arab and Palestinian organization that mobilizes for the liberation of nearly 5,000 Palestinian political prisoners in Israeli jails. We advocate for the boycott of Israel, and we uphold the right of Palestinians to resist occupation, apartheid and oppression, and the right of all Palestinian refugees to return to their homes and lands. We stand for a free Palestine, from the river to the sea.

It is for these reasons and these reasons alone that Israel’s Defense Ministry, engaged in daily war crimes and crimes against humanity against the Palestinian people under occupation, is attacking Samidoun’s work. This is a further attempt to use repression and threats against the Palestinian people and their international allies as a campaign activity for Benny Gantz’s party in the Israeli elections. This is also an attempt to divert attention from the serious problem facing hundreds of Zionist officials – including Gantz himself – who are afraid from the next steps of the investigations by the International Criminal Court (ICC) after its last announcement on 5 February 2021 affirming that it has the authority to investigate war crimes in the Palestinian occupied territories.

Further, it is no surprise that this public announcement comes only days after 300 international organizations have joined in a collective campaign to free Palestinian student prisoners.

We are among many activists and organizations who have been attacked by Israel — many of whom have paid a much higher price, including those Palestinians, Arabs and internationalists who have been jailed, tortured and assassinated by Israel. Always, the goal is the same: an attempt to undermine the growing international support for the Palestinian people and their just cause.

Almost every organization, movement and even individual activist that stands for Palestinian freedom is targeted by the Israeli occupation and its leading war criminals for harassment, threats and attempts to mobilize state power to suppress an anti-colonial, anti-racist movement for justice and liberation. We are proud to stand with all of those who face such smear campaigns and repressive attacks — by intensifying our work and coming together to confront Israeli apartheid, occupation, war crimes and colonization, and organizing for the liberation of Palestine.

We invite activists and organizations to join the Samidoun Network and build together with us. Contact us at samidoun@samidoun.net.