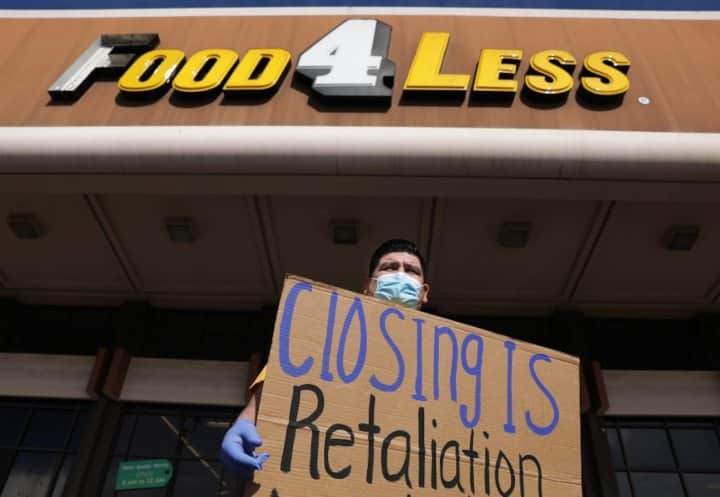 In response to simmering anger, several cities in California as well as the city of Seattle have mandated hazard pay for essential workers. The California Grocers Association is suing and Kroger, the largest supermarket chain in the world, is refusing to pay and threatening to close two supermarkets permanently in retaliation.

There are corporate-sponsored billboards atop buildings and along the highways, from Times Square in New York City to the freeways of Los Angeles, thanking and honoring frontline workers for putting themselves in harm’s way during the pandemic. But the lofty messages lose all meaning alongside the actual treatment of those workers by their capitalist bosses.

Supermarkets have become dangerous places to work and many of them have been hotspots for COVID-19 during the pandemic. According to United Food and Commercial Workers, the union that represents 1.3 million workers, more than 400 grocery workers have died during the pandemic and 20,000 have been infected. Throughout the months there have been protests by unionized grocery workers demanding more safety precautions, hazard pay and more paid sick time.

Long Beach, Calif., was the first city to mandate hazard pay by giant grocery chains. Santa Monica soon followed suit. Now Los Angeles and Oakland have passed their own hazard pay laws. San Jose and Berkeley are expected to join in, as is Santa Clara County.

But bosses will be bosses. Last month when Long Beach made an extra $4 per hour in “hero pay” mandatory, the owner of two supermarkets — Ralphs and a Food4Less — announced it would shut them down for good rather than pay the $4. The owner is Kroger Corporation, whose profits increased by a whopping 90% last year.  The average pay for clerks and cashiers at Kroger-owned supermarkets in southern California is a little over $10 an hour, so the “hero pay” does not even bring the average up to the $15 an hour minimum. If it goes through with its vendetta, some 200 workers in Long Beach will lose their jobs.

Kroger profited from the pandemic when restaurants closed and millions of people began cooking at home more. In 2020 they raked in $122 billion. Every cent of it came to them because grocery workers took on the risk of reporting for work every day, during this deadliest pandemic in a century.

It is no surprise that Kroger chose Long Beach to challenge the modest demand for hazard pay. Over decades, most southern California beach cities saw wealthy, mostly-white people move in to enjoy the climate and the beach. At the same time, working-class people tried to escape skyrocketing rents by moving to the desert towns and cities that lie to the east, leaving behind affluent beach cities.

But Long Beach is different. More than 30,000 people from the city work at the Port of Long Beach, as well as more than 300,000 people from other parts of southern California. There is a giant oil field in the Signal Hill area. Even though the city’s manufacturing jobs have dwindled like the rest of the country, it has remained solidly working-class and become more diverse. Sixty percent of the population of Long Beach are people of color and immigrants. This was the perfect city for Kroger to go on the attack and set an example.

Hazard pay is supposed to be included in a White House-initiated COVID relief bill. But what is included in that bill would be essentially a handout to the corporations — giant grocers like Kroger wouldn’t have to pay an extra dime. The city mandates for hazard pay that have been passed during the last month would mean it would come out of the owners’ pockets. But the bosses see that as setting a dangerous precedent.

Unionized grocery workers and other essential workers have been fighting for hazard pay and on other issues regarding the dangers of being in constant contact with so many people. UFCW members have been organizing around the issues regularly throughout the entire pandemic, and there have been protests by progressive organizations in solidarity.

In March 2020, Whole Foods workers, Amazon workers, and the gig workers who deliver for Instacart walked off the job in a one-day job action. At the end of April, Amazon, Target, Walmart, Instacart and FedEx workers did another work stoppage. In July, something occurred that must have shaken the corporate ruling class. The anger over treatment of essential workers — who are overwhelmingly Black and Brown — hooked up with the movement for Black Lives in the form of walkouts. They joined the powerful mass marches throughout the country after the murder of George Floyd and other victims of racist police, and the marches also demanded economic justice and the right to a union.

Because of this simmering resentment and rage over the last year, and especially during this third deadly COVID-19 surge, city governments throughout California and in the state of Washington see the handwriting on the wall. Though the greedy Kroger grocery store billionaires are intransigent,  city government functionaries are concerned about the direction the struggle for hazard pay and real respect for workers may go. Sometimes the role of capitalist government is to force part of the capitalist class to do something for its own good. There is already an historic union drive in the Birmingham suburban area of Bessemer, Ala., where 5,800 Amazon warehouse workers are having a union election — brought on by worsening and dangerous conditions during the pandemic.

Capitalists and those who serve them feel desperate to stop the pandemic from becoming a flashpoint in a resurgent workers movement. Of those cities that instituted the hazard pay laws it remains to be seen how willing they are to enforce them. They’re not exactly in a position of power against giant corporations. But working-class history has shown that if the ‘sleeping giant’ that is the working-class awakens, Kroger and the other giant corporations will wish they paid the hazard pay.