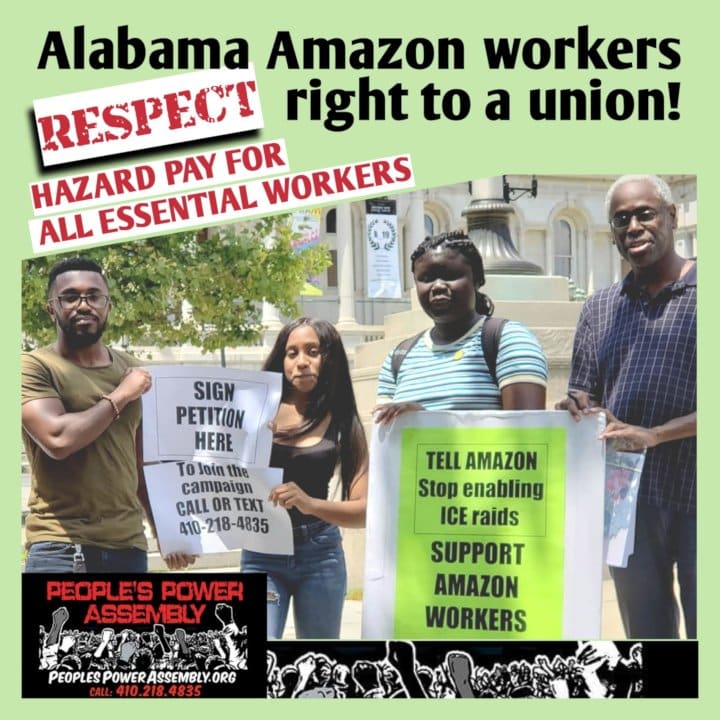 Open Letter to Jeff Bezos and the Alabama Amazon workers

We are sending all of our support, love and solidarity to the Bessemer, Alabama, Amazon workers in their fight for a union and for workers power.

Trust us we know how brutal warehouse conditions are: the impossible quotas and pressure to keep up; the lack of safety and concern for workers who are risking their lives during this pandemic without hazard pay; the constant monitoring of our every move; breaks that are way too short and bathrooms that are way too far and so much more.

Like Rosa Parks and the civil rights movement, Bessemer workers are leading the way.

We salute your courage given everything that the company has done to discourage, intimidate and stop workers from having a fair vote.  Shame on you, Amazon, that you would oppose mail in votes.

Win or lose, no one will forget this battle against workplace injustice.

What will be remembered, Jeff Bezos, is your greed and callousness during this pandemic.

You made thirteen billion ($13,000,000,000) in one day after the pandemic caused Amazon’s stock price to surge.  This set a record for the largest single day increase in individual wealth ever recorded.  Yes, corona cash has been good for you, Bezos, despite the fact that 20,000 workers have tested positive, and that you withdrew hazard pay while you were cashing in.

The Alabama workers battle is truly a fight between David and Goliath, that is taking place in the birthplace of the civil rights movement. We must all pick a side; as the union song goes “Which side are you on?”

We urge everyone to pick the side of the Bessemer, Alabama workers!

Yours for United Workers Action,