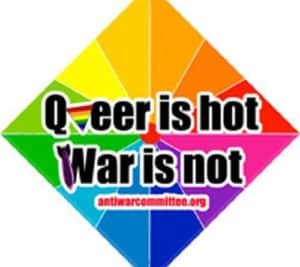 For four years of Donald Trump’s presidency, the LGBTQ2S community had dealt with a near constant erosion of our democratic rights and legal protections. In tandem with this came a rise in hateful sentiment against us, with trans people in particular standing in the crosshairs of American reaction and facing the violence that comes with it.

Naturally, when the Trump administration banned transgender people from military service, the message was loud and clear: Trump and his base believe that trans folks don’t deserve to serve in an institution that is regarded with honor and respect, and must be barred from doing so. Through executive process the Trump administration enshrined this outright discrimination into law. While military service is widely considered a democratic right, it’s well known that many enlist for the sake of economic security. Given that some of the biggest challenges facing trans folks in the U.S. are access to employment, housing, and healthcare, denying them entry into an institution that guarantees these is, for many, of more immediate importance than democratic rights in the abstract.

While we stand against this blatant discrimination against our trans siblings, none of this is to say that the Anti-War Committee endorses military service. We maintain that the U.S. Military is the armed wing of U.S. imperialism whose purpose is to exercise the political and economic will of the United States by force. As such, we believe that the talents of people of conscience would be better served elsewhere.

Part of the reason for this is that the supposed stability offered by the military is paper thin. Once recruited, enlisted personnel face higher risk of suicide, chronic injuries, a culture centered around alcohol that leads to rampant alcoholism, and overwork. Women face sexual assault at astronomical rates. The military takes the desperate masses yearning for their basic needs and forces them through a grinder before discarding them; veterans of military service are often left to their own devices without adequate support for reintegration into civilian society.

Given that 1 in 5 of the rioters that broke into the U.S. Capitol on Jan. 6 are military veterans, we can’t ignore one of the most potent sources of the military’s toxicity: the fact that the desire for military experience and skills has historically led large numbers of white supremacists to join the armed forces. These violent racist extremists are doing work shoulder-to-shoulder with everyone else in the military. The broad rise of extreme right wing ideology is much more potent within the ranks, leading to large numbers of active and former servicemembers to join militia groups and white nationalist organizations.

The repeal of the transgender military ban isn’t the beacon of opportunity for trans folks that the Biden administration makes it out to be. For those of us who would qualify, it is the opportunity to trade one set of dangerous circumstances for another. The U.S. has repeatedly shown that it that won’t bat an eye as our transgender siblings are villainized as deviants and killed in anti-trans hate crimes. They won’t guarantee us dignity and safety, they won’t guarantee access for our basic human needs, but they’ll guarantee for us the opportunity to die for empire.

The Anti-War Committee has always advocated that money be spent on human needs, and not for war. We demand that oppressed people in the U.S., including our trans siblings, be provided with the resources necessary to survive, instead of being given more opportunities to die.