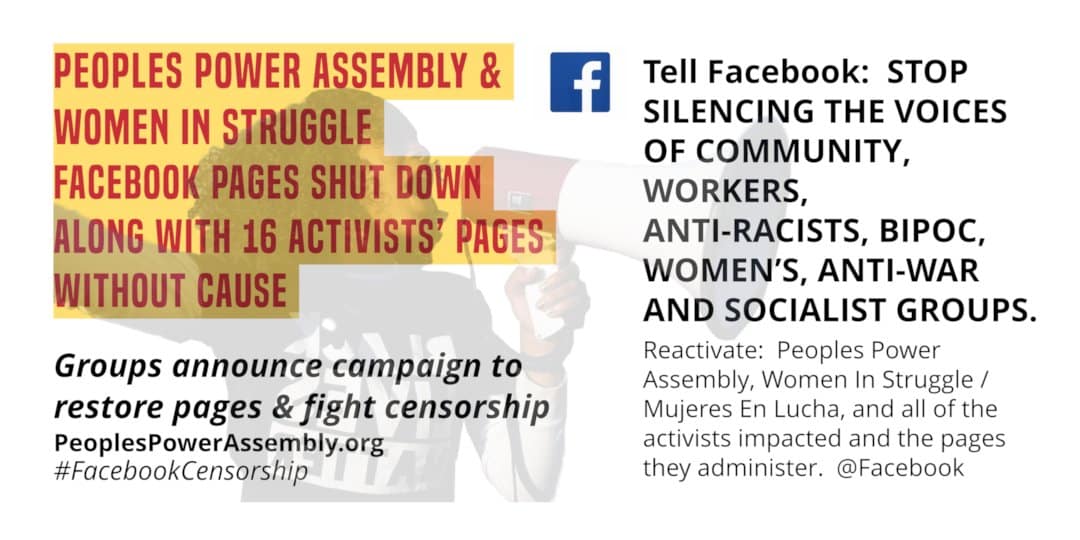 Facebook shuts down community, women’s groups and activists’ pages without cause

Groups announce campaign to restore pages and to fight censorship

It also included PPA page editor Charlene Lady J. Jenkins, a founder of “What’s Up Baltimore,” whose Baltimore grassroots network was shut down as a result.

In addition, 16 individual activists’ profiles were disabled, which means that close to a dozen other progressive pages and groups were frozen when their administrators were disabled, including the Baltimore Harriet Tubman Solidarity Center, ICE Out of Baltimore, the Prisoners Solidarity Committee, Youth Against War & Racism, and Baltimore and Maryland Amazon Workers.

Sharon Black said: “Facebook’s disabling of pages and the accounts of major activists who have not violated community standards is meant to silence and censor our voices. The Peoples Power Assembly has played a significant role in the Baltimore Black Lives Matter protests in the summer and more recently opposing Trump’s effort to overturn the election. On Dr. King Jr.’s birthday holiday, we held a car caravan to Jessup Correctional Institute and the Howard County Immigrant Detention Center to demand justice for prisoners and detainees.”

Berta Joubert-Ceci, founder of the Women’s Fightback National Network/Red Nacional de Mujeres en Lucha and Women In Struggle, said, “It is appalling — the cowardice of Facebook in silencing the voices of women and progressive people who struggle for justice and a better life for all.”  Joubert-Ceci is also an organizer of the International Peoples’ Tribunal on U.S. Colonial Crimes in Puerto Rico.  Her personal page used to connect with the Puerto Rican movement was deleted along with Women In Struggle.

Attorney Summerfield concluded, “We intend to fight this!  This includes waging a public campaign to demand that the pages of all activists and the groups they represent are reactivated.  We intend to use every avenue at our disposal, including legal remedies, to stop the censorship of voices that are too often marginalized.”