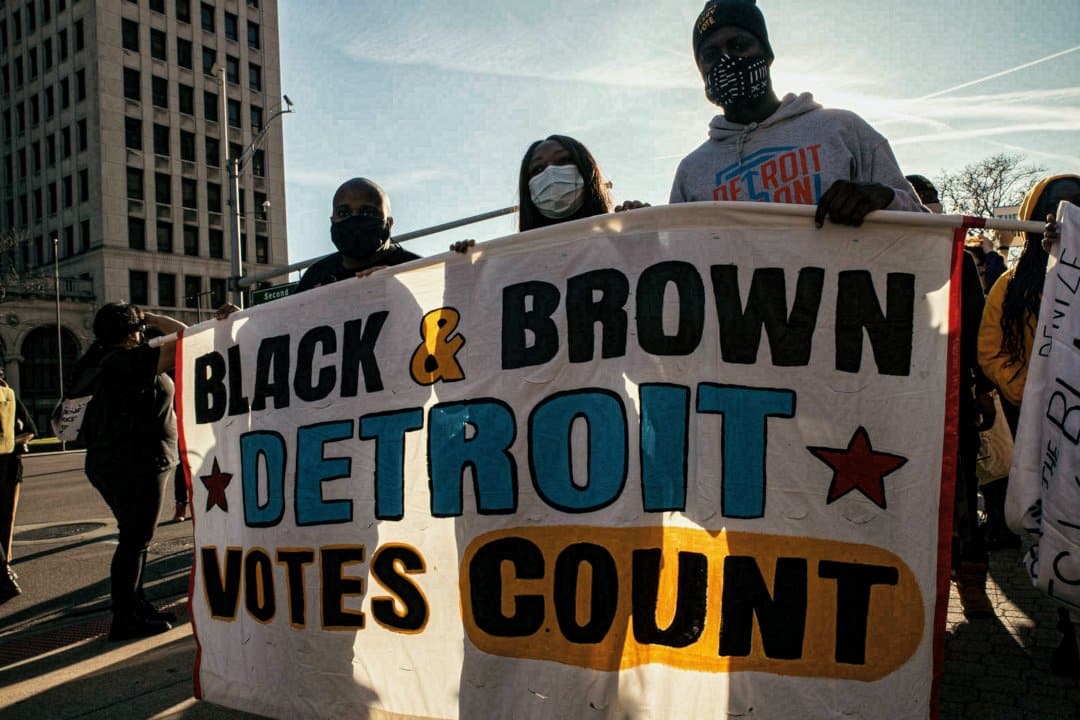 Trump’s campaign to steal the election hasn’t stopped. It still depends on stealing Black votes. His No. 1 thug Rudy Giuliani wants the votes in Atlanta, Detroit, Milwaukee and Philadelphia thrown out.

[Trump backtracked on his statement that he would leave the White House if the Electoral College seated Joe Biden. Trump tweeted Nov. 28: “Biden can only enter the White House as President if he can prove that his ridiculous ‘80,000,000 votes’ were not fraudulently or illegally obtained. When you see what happened in Detroit, Atlanta, Philadelphia & Milwaukee, massive voter fraud, he’s got a big unsolvable problem!” – Editor]

All these cities have large Black communities with Atlanta and Detroit having Black majorities. If Trump is able to ditch the votes in these cities, he can overturn the results in Georgia, Michigan, Wisconsin and Pennsylvania and win the Electoral College.

That’s what Trump supporter Monica Palmer tried to do In Michigan’s Wayne County, which includes Detroit. Sitting on the county election board, Palmer wanted to certify just the votes of Detroit’s suburbs but not those of Detroit itself.

That’s despite the suburb of Livonia having the second highest number of county precincts with irregularities. While Detroit is nearly 80% Black, Livonia is less than 5% African American. Detroit also has large Arab and Latinx communities whose votes would have been thrown away.

It was the power of the people that stopped this outrage. Hundreds mobilized to stop the steal. Local congressperson Rep. Rashida Tlaib — a Palestinian member of “the squad” — denounced the racist attempt to disenfranchise Detroit’s voters.

In Milwaukee, racist Trump supporters are harassing election workers, many of whom are Black, during a recount. “It looks like [Trump is] looking to do pretty much everything he can to disenfranchise voters of color,” said Milwaukee County Executive David Crowley, the first Black person elected to that post.

That’s nothing new. After the 1976 presidential election, former Wisconsin Gov. Warren Knowles claimed Black people were being driven around Milwaukee in a school bus and voting a zillion times.

Then there’s North Carolina. Peaceful marchers, most of whom were Black, going to polls on Halloween in Alamance County were pepper-sprayed and 23 were arrested by Sheriff’s deputies. The Reverend Greg Drumwright and two others are now facing frame-up felony charges.

Sheriff Terry Johnson, who ordered the attack, is also a notorious anti-immigrant and anti-Latinx bigot.

It was Black voters who prevented David Duke from being elected Louisiana’s governor in 1991. While 55% of white voters cast their ballots for the neo-Nazi, the Black community, with support from progressive whites, mobilized to stop Duke.

A Black shield stopped the deluge of anti-Jewish racism and fascist violence that would have followed Duke’s election.

Ollie North wasn’t elected a U.S. senator in 1994 from Virginia because of the Black vote. North helped flood the U.S. with crack cocaine while Ronald Reagan was in the White House. Drug sales financed the contra terrorists trying to overthrow Nicaragua’s Sandinista government.

And it was the Black vote that blocked the super bigot sexual predator Roy Moore from becoming a U.S. senator from Alabama in 2018.

The Black vote was won by Black soldiers during the U.S. Civil War and by bloody struggles during the Reconstruction period that followed. The Fifteenth Amendment, passed in 1870, was supposed to guarantee the right to vote.

That right was swept away by the overthrow of Reconstruction by Ku Klux Klan terror. Black people fought for decades to defend their right to vote without any support from the federal government.

In 1898, the city government of Wilmington, N.C., was overthrown by a white racist mob. Sixty Black people were massacred in the coup. Within two years the right to vote was stolen from virtually all African Americans in North Carolina.

People died for the 1965 Voting Rights Act. Harriette Moore and Harry T. Moore were bombed in their home on Christmas Day 1951. They were murdered by the Klan for registering Black voters.

NAACP leader Medgar Evers fought for voting rights in Mississippi and was assassinated on June 12, 1963. The attack on demonstrators in Selma, Ala., in 1965, in which future Congressperson John Lewis was nearly beaten to death by George Wallace’s state troopers, shocked the world.

More than 40 years of political reaction in the U.S. have included vicious attacks on Black voting rights. The voter ID laws passed by over 30 states are deliberately crafted to limit voting by Asian, Black, Indigenous, Latinx and poor people in general.

The 24th Amendment, enacted in 1964, banned poll taxes. Since photo identification usually costs money, isn’t that a poll tax? Yet the U.S. Supreme Court has upheld almost all these discriminatory state ID laws.

Six judges on that capitalist court threw out the vital enforcement provisions of the Voting Rights Act in the 2013 Shelby v. Moore decision.

‘We’re not a democracy’

The struggle for Black voting rights empowers all poor and working people. Literacy tests were used to stop Indigenous people from voting in Arizona until 1970.

One of the enforcers in Arizona who tried to prevent Black, Indigenous and Latinx people from voting in the 1964 election was William Rehnquist. The thug was rewarded for his strong-arming by being made chief justice of the U.S. Supreme Court.

Millions of white workers benefited when Harlem’s Adam Clayton Powell Jr. was chair of the Education and Labor Committee in the House of Representatives. The Black congressperson pushed through increases in the minimum wage and extended coverage to millions of low paid workers.

The Trump and Giuliani attack on Black votes is aimed at overturning the vote of 80 million people who voted against Trump. Among them were Asian voters who helped defeat Trump in Georgia.

While the super rich, like Michael Bloomberg, are willing to spend billions to buy elections, they sneer at democracy. Even cockroach capitalists consider it intolerable that the vote of poor and working people should count as much as theirs.

That was Robert L. Bartley’s attitude when he was the Wall Street Journal’s editorial page editor. He justified George W. Bush becoming president in 2000 despite getting half-a-million fewer votes than Al Gore.

Bartley did so on the basis that many of the Democratic votes came from “union households” and “Blacks” while Republican voters were allegedly “producers of wealth.”

Listen up Wall Street Journal: if an election was held of only the essential workers who kept society together during the coronavirus pandemic, Trump would have lost in a landslide.

Attacks on the idea of democracy used to come from the wingnuts of the John Birch Society. In an Oct. 7 tweet, Utah Sen. Mike Lee declared “We’re not a democracy.”

Lee wasn’t admitting that money talks during capitalist elections. He wants to get rid of any notion of democracy.

Poor and working people will show all the Trumps what real democracy looks like. That includes over two million workers in prison. Evicting Trump from the White House is just the first step.

Only by taking real democracy to the streets will we stop evictions and win compensation for all the jobless. We need to organize and fight more than before.