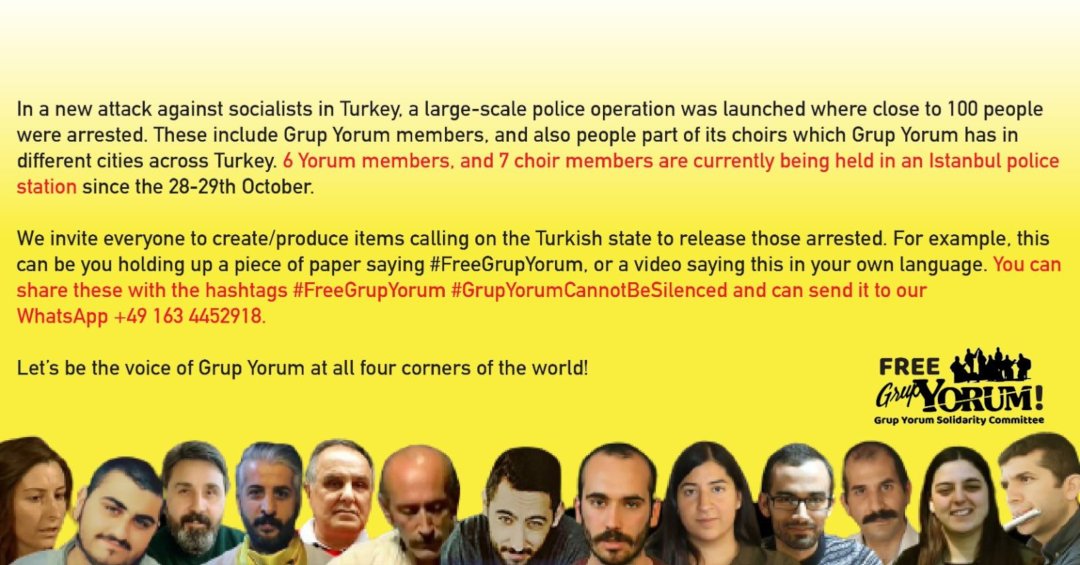 Intimidation and repression against progressive, left socialist forces and organizations of the people in Turkey continue with full speed.

Since Oct. 28, the Justice and Development Party (AKP) government, headed by President Recep Tayyip Erdoğan, has led another so-called anti-terror offensive towards the popular resistance movement, trying to project its own fear of the people.

By evening, 31 police detentions were registered in various cities and provinces of Turkey.

On Oct. 29, the People’s Law Office reported news sources according to which 99 persons had been detained so far, while warrants were issued for 120 people.

The arrest terror by the police continues.

Resisters for terminated jobs, musicians of Grup Yorum, lawyers of the People’s Law Office and names of several supporters of the resistance against injustice and state repression were listed among the detainees.

Two additional members of Grup Yorum, Ali Araci (released from prison a short time ago) and Seher Adigüzel, were arrested by the police in their house. It was also announced that group member Meral Hir was detained by police.

Dismissed teacher Selvi Polat, known from the Bakirköy Resistance, was taken into custody on Oct. 29.

The list is growing; even some of their family members are targeted.

The repression is intensified by denial of legal assistance and the secrecy of the charges.

The authorities seem to be creating a new construct, as they did in several police operations before: Arresting hundreds of people with terrorism accusations and eventually looking for new “secret witnesses” to strengthen their accusations.

While access to lawyers and the investigation files is being denied, the press loyal to the regime printed the propaganda lies of the political police without delay and tried to associate the detainees with terror.

If there’s anything for sure now, it is that these attacks on democratic protest, demands for justice and defense of the rule of law aim to consolidate a totalitarian regime and fascism in order to go on with exploitation of workers in the interest of large companies.

This course of the government will increase poverty of a major part of the people, who are left without jobs, future or proper health care, who are denied their basic rights and finally even criminalized for their legal struggle to gain their rights.

Therefore, only the consciousness and solidarity of the people all over the world can push back repression to progressive struggle and win freedom for those who are facing the repression of a power that fears the people’s reaction to its policy, shaken by a deep crisis.