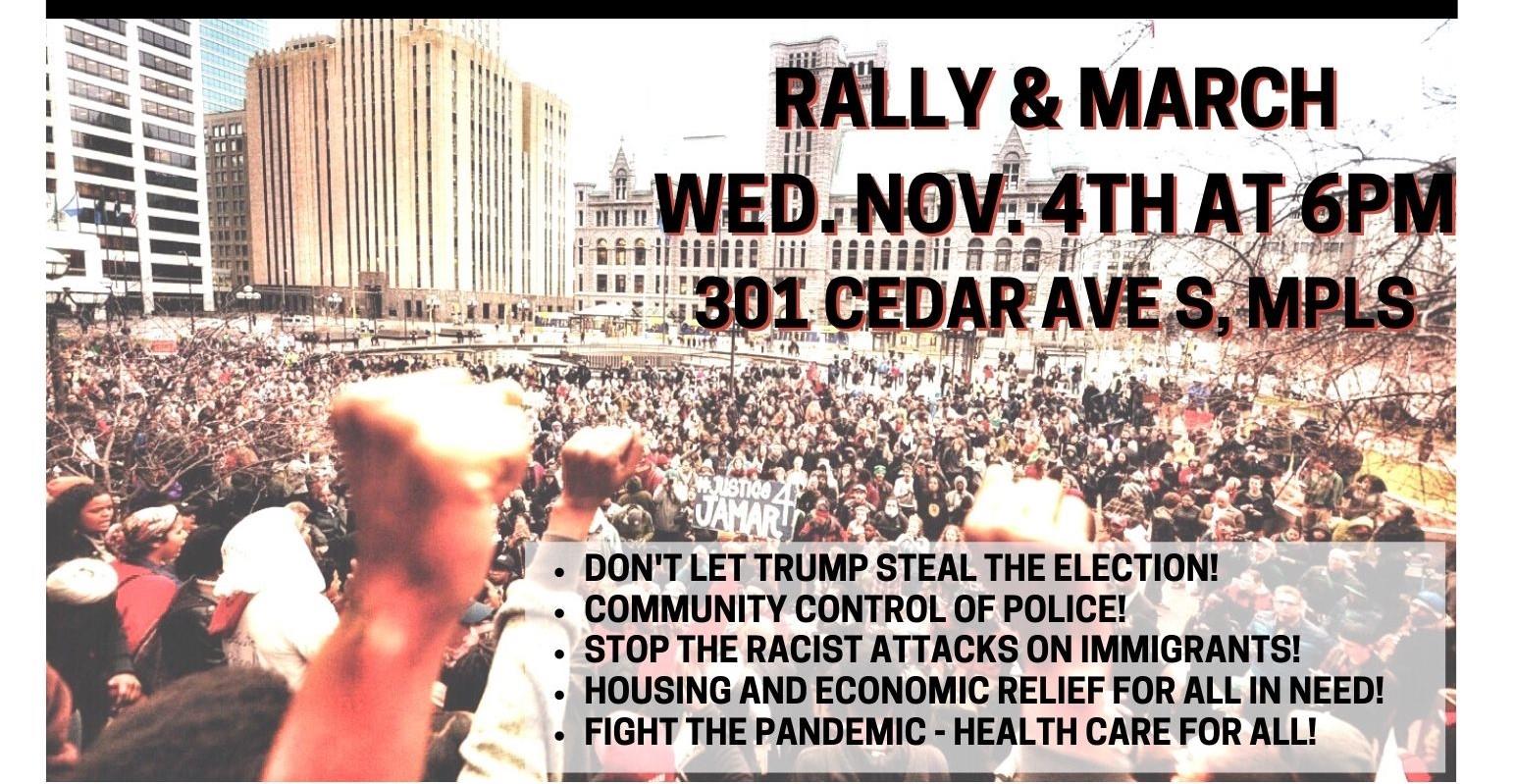 Day after the elections – Get ready to fight!

No matter the outcome, we need a People’s Mandate to address the triple pandemic of racism, COVID-19, and recession. We want Trump out. But even if that happens, we cannot stop the fight. Our response on November 4 can set the tone for struggle for the next four years.
We don’t know the outcome. But we are READY to say EITHER,

2. “Fight Trump and everything he stands for!” or

3. “A Biden win will not give the freedom we demand!”

Trump out! Power to the people!

The Twin Cities Coalition for Justice for Jamar (TCC4J) is uniting the National Alliance Against Racist and Political Repression for a U.S.-wide day of protest Nov. 4 around the following demands.

–Stop Police Crimes! Community Control of the Police
–Extend and Expand Economic Relief for the Unemployed
–Stop Evictions and Utility Shut-offs
–Health Care for All
–Stop the Racist Attacks on Immigrants and Harassment of Asian Americans
–Fight the Pandemic!
–Don’t let Trump steal the election!

——
Here is the national NAARPR call:

After the election, the peoples mandate for change must be carried out.

In this triple pandemic of racism, COVID-19, and recession our National Alliance Against Racist and Political Repression is issuing a call to all the democratic forces presently engaged in the struggle against racist injustice, the economic slaughter of our communities and the utterly unspeakable failure at all levels to use its full capacity to stop the death march of the corona virus across the land.

We, as a country, have a greater capacity in terms of wealth and technology than most other countries to stop the spread of infections and death but unmitigated, capitalist greed, putting profits before people, has made us the leading country in COVID-19 infections and death. The pandemic has hit African American and other oppressed communities the hardest.

We are going all out in this election to defeat Trump because it is unequivocally clear that this administration’s racist, anti-people and anti-working class policies have already eroded every semblance of democracy and brought us to the brink of the worst economic disaster in U.S. history with no plan whatsoever to provide relief for our suffering people. This recession has hit women, and in particular Black women the hardest, snatching away years of progress.

Win or lose in the elections we are calling for mass protests the day after the election to highlight the fact that Trump’s scorched earth policies have left the political landscape almost as barren and bleak as COVID-19 and the police-state style racist repression used against tens of thousands of protesters, leaving thousands injured and jailed and some dead. Trump has openly sided with racist, right-wing, violent elements to attack the movement against police crimes.
Trump losing the elections will create greater organizing space for turning this page of history writ large with sickness, death and mass rebellion to embark upon the road for freedom, justice and equality and ending the plundering of the monopoly capitalist bosses.

Biden’s victory is important in this moment of history we do not deny that in the least. Yet we must face the sober reality that his victory will not necessarily provide the path to freedom, justice and equality for our people, for the 140 million poor, for the homeless, the sick, hungry and working class masses. We, the people’s movement is the vehicle we must drive up freedom’s road.

We are also well aware that Trump has said that he would not leave power. His administration has already tried to disrupt the election by undermining the Post Office and attacks on mail-in voting. Trump could try many things during and after the election such as trying to stop the vote count (a tactic that pro-U.S. forces in other countries have done to fix elections) or call out right-wing shock troops.

The fundamental truth at the core of this national call for protests the day after the November Presidential election is that the great historical lesson of the moment we are in is best characterized by the fact that over 22 million rebelled against racist injustice in response to the brutal murder of George Floyd. The social energy of this great rebellion is the same energy propelling us to call this protest. Join us and let us, the people united, open a new era of struggle for our liberation dedicate to never returning our country to like it was. We are fighting for a new day to dance with great jubilee in the sunlight of freedom.