On Sept. 21, Malaya Movement DMV and BAYAN USA-DMV, together with several progressive Filipino organizations, community members, and allies, held a vigil in front of the U.S. Capitol to commemorate the 48th anniversary of the declaration of martial law in the Philippines.

The event featured a candle-lit tribute to the victims of both Ferdinand Marcos’ and Rodrigo Duterte’s regimes and speeches condemning Duterte’s “de facto martial law unleashed through the Anti-Terrorism Law (ATL).”  Speakers also called on U.S. Congress to pass the Philippine Human Rights Act (PHRA), a bill that seeks to end U.S. financial assistance for the police and military forces of the Duterte Administration.

A member of progressive youth and student organization, ANAKBAYAN DC, Sarah Monteclaros, said in her speech: “It has been 48 years since the brutal administration caused the disappearance of hundreds of Filipinos, viciously murdered thousands, and tortured and imprisoned tens of thousands of Filipinos. It has been 48 years since the corrupt regime stole billions of dollars from the Filipino people which sold the resources of the Philippines to foreign and to capitalist interests. Their actions continue to plague generations of Filipinos under crushing debt.” Citing the example of those who fell in the resistance against Marcos, Monteclaros said the Filipino people need to continue to struggle against the Duterte regime. 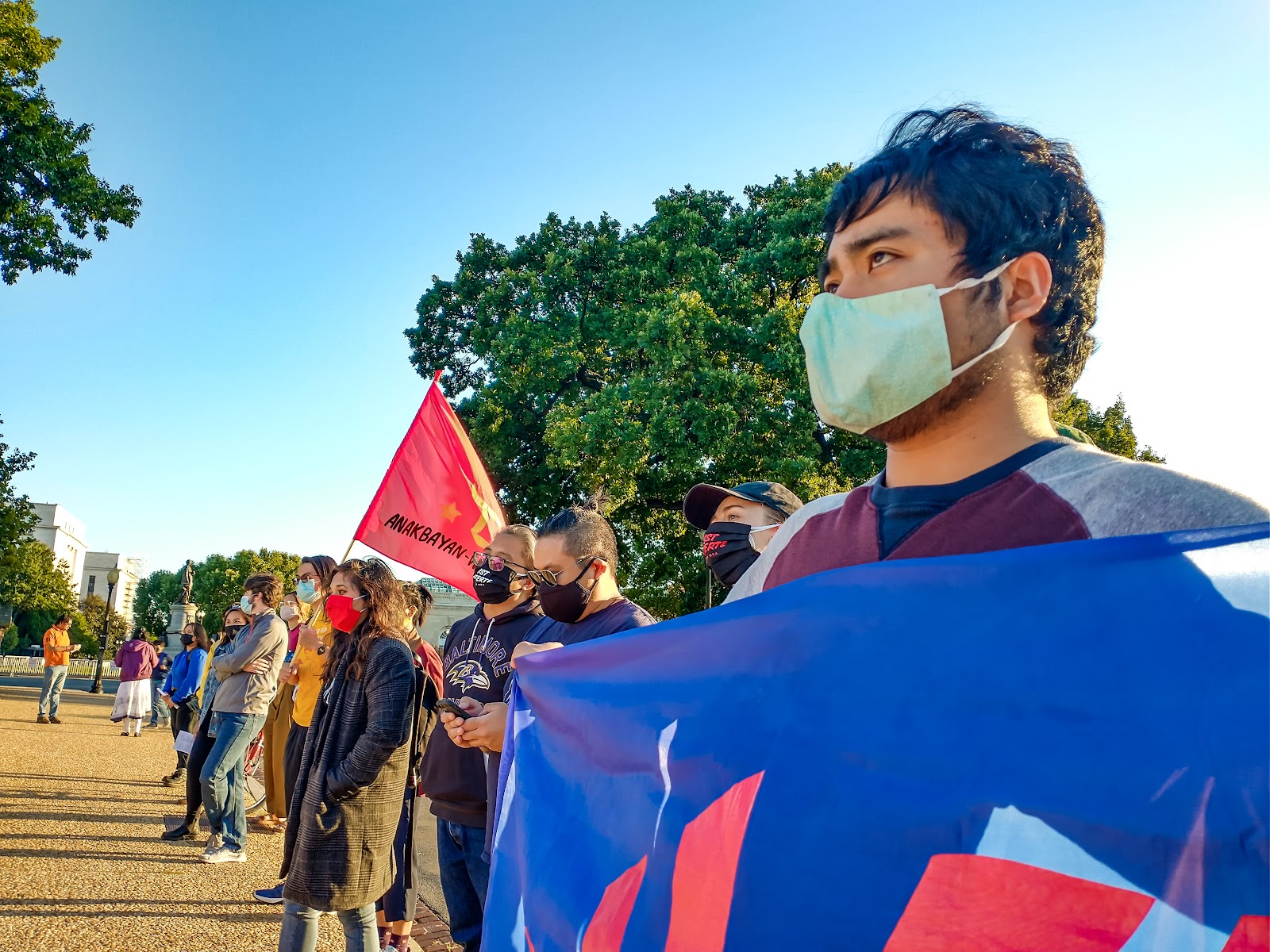 Duterte signed the Anti-Terror Bill into law and it went into effect on July 18, marking what activists describe as “the defacto return of the country to the dark days of martial law.” Critics of the ATL assert that all forms of civil discourse and dissent are criminalized, as anyone who dares to voice their own opinion is tagged as “terrorist” and subject to arrests and torture. According to KARAPATAN and Human Rights Defenders Memorial, the Anti-Terror Law is only the latest product of Duterte’s rule of terror, which has led to over 30,000 deaths – mainly extra-judicial killings as a result of Duterte’s war on drugs. Human rights groups say that the death tolls under four years of Duterte administration have already surpassed that of the martial law period. Scores of human rights violations have been documented as well during the two-year imposition of martial law in Mindanao.

“Today, we witness the resurrection of the dark years of Marcos under the dictatorship of President Rodrigo Duterte,” said Mia Elane, representing the George Washington University’s Philippine Cultural Society (PCS). “It has caused the mass arrest of fellow youth activists and killings of human rights defenders. Is this not in essence martial law all over again?

“But in these times, let us remember the role of the Filipino youth. José Rizal said, ‘the youth are the hope of the nation.’ As Filipino-American youth, we are inspired by the courage of the youth who fought against dictatorship and ousted Marcos. Our generation has been proved incredible in speaking out against injustices and fighting for the rights for the most marginalized peoples. We have the power to change the course of history! We have the power to tear down oppressive systems and we have the power to help our brothers and sisters in need!”

Drawing parallel from the Bolivian people’s struggle against imperialism and for democracy, Marian Almanza, a member of Colectivo Kawsay, said: “We have a community here that has what we sometimes refer to in Bolivia as memoria larga — long memory. We recall the dictatorships and the coups that we’re being fought, we remember the figures and the people who have been silenced, we remember those murdered  — we do not forgive nor forget. We remember what our ancestors have fought and how it guides our struggles now. And it’s very clear that those exact struggles are not over.” Colectivo Kawsay is a progressive organization of the Bolivian community in the DMV area. 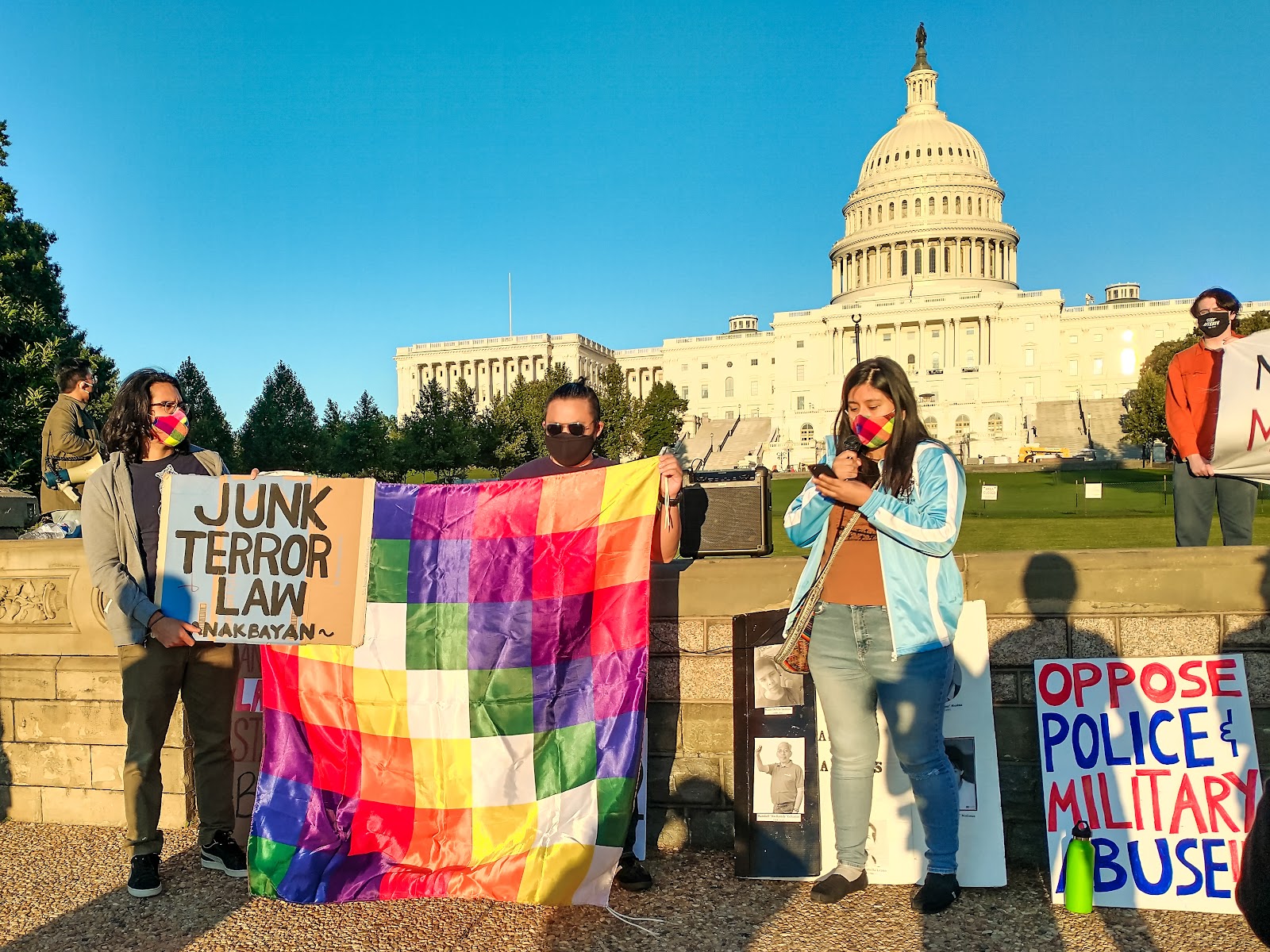 Long-time member of People’s Power Assembly Baltimore, Andre Powell, also highlighted Duterte’s dependence on US aid and raised the necessity to pass the PHRA. He made clear that the Filipino government has always relied heavily on U.S. military and financial assistance to put down popular dissent: in 2016 alone, $120 million was given to the Duterte administration in the form of military aid. “None of the aid has trickled down to the working class in terms of higher livable wages, safe working condition and labor rights,” said Powell.

Coordinator for progressive grassroots alliance Jhong Delacruz recounted his own mother’s experience as a youth-activist under Martial Law, “In just one week, my mom lost all her friends and activist-comrades. Raids of safe houses and organizing spaces were happening left and right. Friends were arrested, forcibly disappeared or “na-desap,” short for desaparecido, which is Spanish for those disappeared. Kabataang Makabayan  and like-minded organizations like Makibaka were declared illegal, their ranks, their operations and their resistance effectively forced underground”

DelaCruz further drew parallels to the current events under the “Duterte Dictatorship. Marcos did not step down peacefully, he was thrown out of office, he was flown out of office to Hawaii, not quite unlike Scott Pemberton, who murdered a Filipina and virtually cannot be held liable for his crimes due to the EDCA military agreement. This State is both terrorist and terrified, afraid of the rising people’s resistance and calls for a new Philippines. Never Again to Martial Law! Let’s continue our History of Resistance against Dictatorship!”

The vigil ended both with a moment of silence as candles were lit and the names of victims of both Marcos Martial Law and Duterte’s so-called “Drug War” and ATL (Anti-Terror Law) were read, followed by a rendition of a traditional protest song, “Bayan Ko”.

On Sept. 21, 1972, then-President Ferdinand Marcos declared martial law across the Philippines to suppress the people’s anger and people’s movement unfolding over dire economic conditions throughout the country. He suspended habeas corpus through the legislative act Proclamation No. 1081, effectively dissolving the legislative branch of the government, which marked the start of an almost 24-year authoritarian rule. Through these 24 years, approximately 70,000 people have been imprisoned, 34,000 tortured, and over 3,200 killed. The ramifications of the Marcos regime are still felt today: the foreign debt he borrowed will not be repaid completely until 2025; at the same time, the Labor Export Policy he facilitated resulted in the unprecedented increase in emigration and Filipino diaspora around the world. 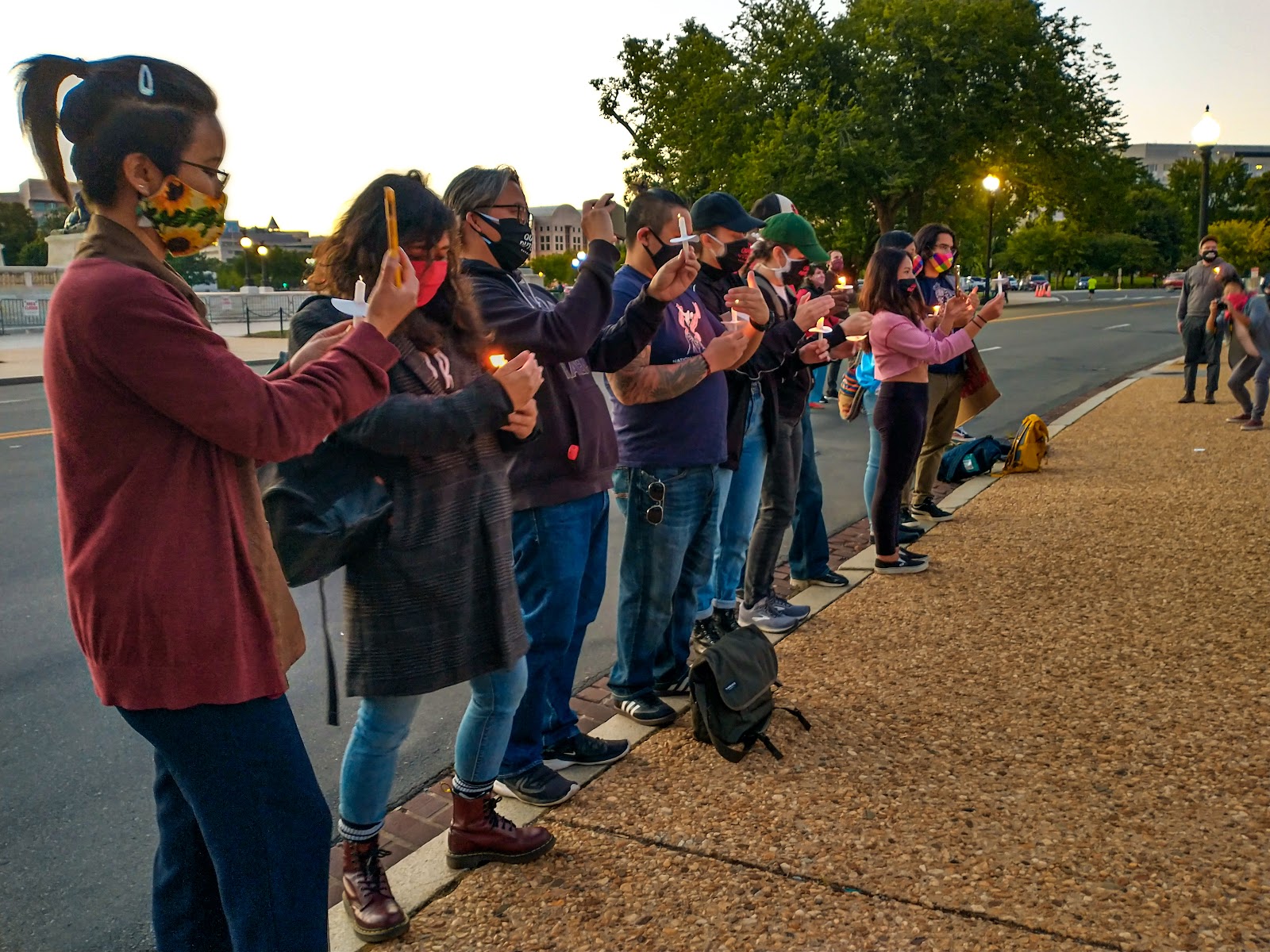 In a 2016 interview with Nico Alconaba of Inquirer Mindanao, Rep. Carlos Isagani Zarate, of the party-list group Bayan Muna said: “Under the Marcos regime, the country’s foreign debt skyrocketed from $599 million in 1966 to $26.7 billion in 1986.”

BAYAN DMV as the national democratic multi-sectoral alliance in the region recalls its founding in the Philippines in 1983, in the face and at the height of the fascist dictatorship, and invites the general public to join its current member-organizations: Gabriela DC, Migrante DC and Anakbayan DC. # 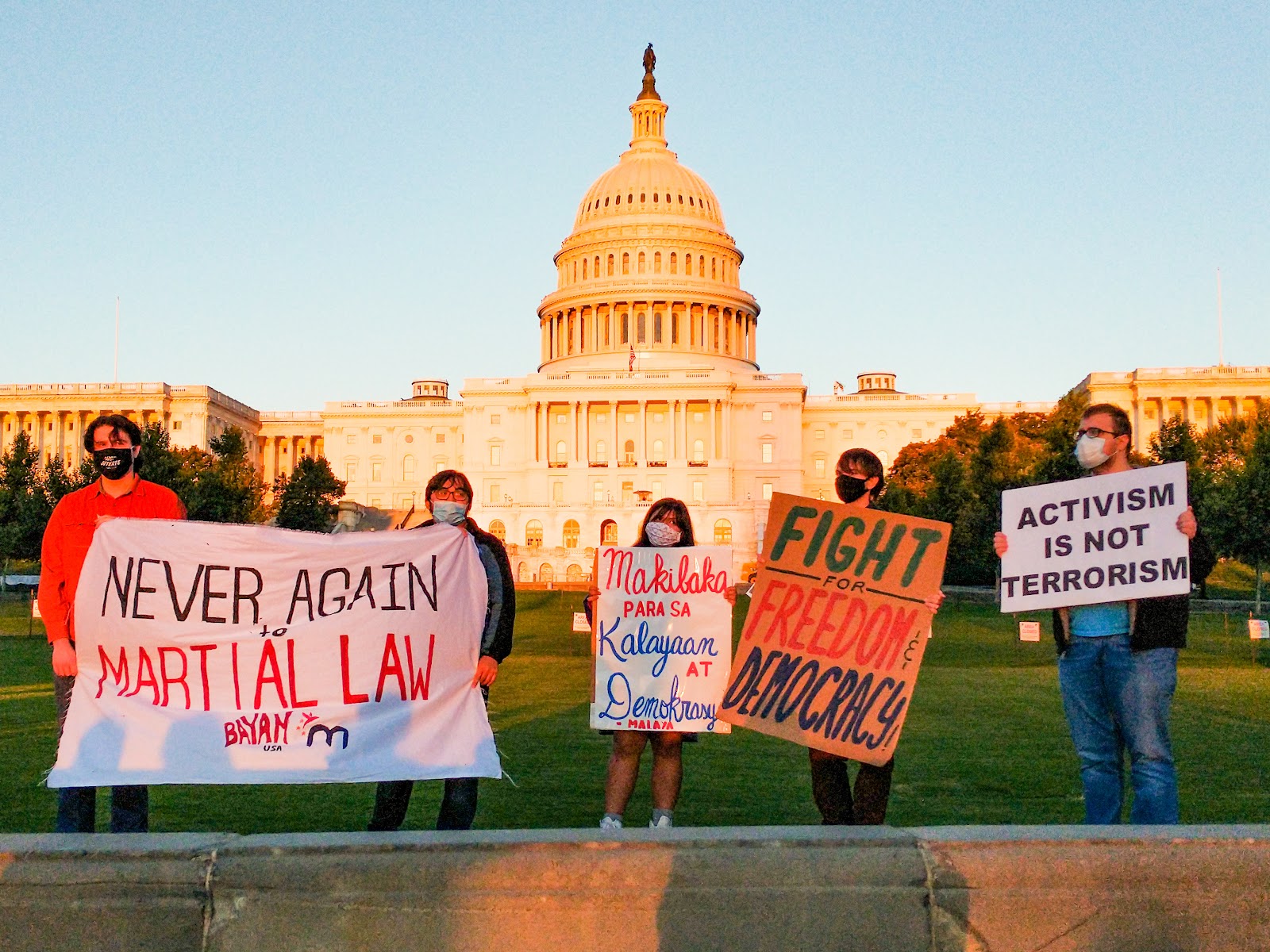