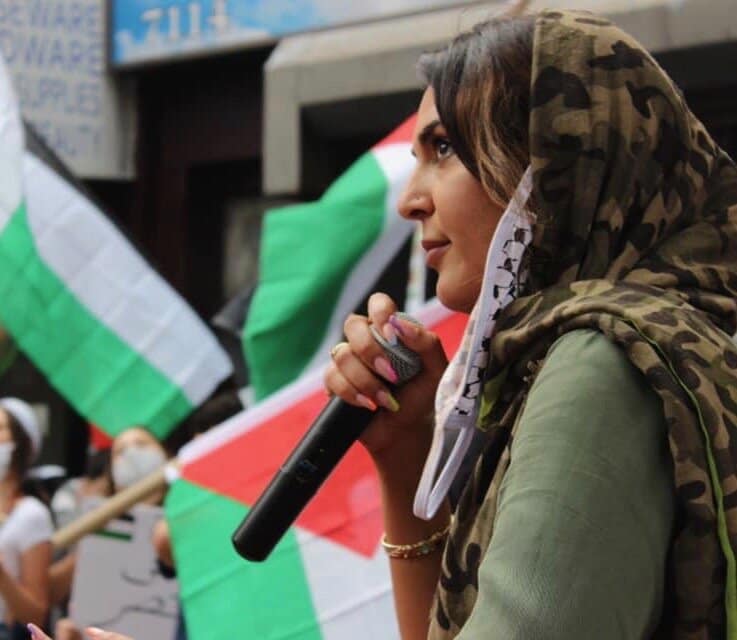 As of Tuesday, September 22, WOL’s Chairperson and co-founder Nerdeen Kiswani has been under attack online by zionists who are shamelessly conflating anti-zionism and anti-semitism in an attempt to destroy her reputation and her role in the movement as one of the most prominent Palestinian organizers in NYC, across the US and around the world. After having been publicly attacked over the years by the likes of Ben Shaprio, Daniel Pipes and Roseanne Barr, Nerdeen is now getting attacked by another celebrity, the actor Michael Rappaport, who has 2 million followers on social media. Last week Rappaport took the lead in using his platform to escalate this latest smear campaign against Nerdeen, going as far as privately messaging her on Instagram threatening that he’s going to get her expelled from the CUNY School of Law where she is currently a 2L student.

The attacks being waged against Nerdeen by the likes of Rappaport, a racist, Islamophobic bully with a record of harassing women, along with an army of online zionist trolls, are rooted in the same conflation of anti-zionism and anti-semitism that we know is used at every turn to attack those who are struggling for the liberation of Palestine. Those who have organized in support of Palestinian liberation knows that while anyone who dares challenge zionism is a target for smear and attack, Palestinian organizers, especially Palestinian Muslim organizers, and women more than anyone else, are subjected to violence, abuse, threats and repression for their organizing work that others are not. This is why we are called upon to mobilize in Nerdeen’s defense.

Take action today in support of Nerdeen below, and help spread the word about #WeStandWithNerdeen by sharing this post widely with your friends!

It’s come to light that ACT.IL, an israeli government-funded app, is behind the online campaign to get Within Our Lifetime’s Chairperson Nerdeen Kiswani expelled from CUNY Law. The app, which assigns daily missions to users “to support Israel’s image and fight against the demonization of the state of Israel,” has been spreading incredibly dangerous lies and misinformation about Nerdeen as part of a racist, Islamophobic smear campaign. For the past week, users of the app have been directed to email CUNY Law demanding Nerdeen’s expulsion based on a fabricated story that she threatened to attack a fellow student – something that NEVER happened. As noted by Palestine Legal, ACT.IL’s “mission” to report Nerdeen to CUNY resulted in over 19,000 false emails being sent to the CUNY Law administration.

Take action today by reporting the app’s harassment against Nerdeen to Google and Apple.

*To report to Google, click here. The app id is “com.actil.android.app.” You can find a screenshot of the false allegations against Nerdeen on the app here so you can upload it with your complaint.

*To report to Apple, click here to report suspicious activity and send an email or chat explaining what the app is doing.

On September 23rd, the CUNY chapter of the National Lawyers Guild released a statement signed by student groups and student leaders across CUNY Law that included the following demands:

1 – WE DEMAND, CUNY School of Law immediately take down, remove, and not create further harmful social media posts on their Instagram, Facebook, and Twitter pages, which have ignited a hateful backlash against our colleague Nerdeen.

2 – WE DEMAND, CUNY School of Law clarify their previous social media posts to rectify their enormous misrepresentation of anti-Zionism as anti-Semitism.

4 – WE DEMAND, CUNY School of Law not conflate anti-Zionism with anti-Semitism. The conflation is harmful to Jewish students as it paints Jews as a monolith, assuming all Jews are Zionists. We further demand that CUNY stop using Jewish students to justify racist and Islamophobic actions. Conflating anti- Zionism with anti-Semitism justifies the hate speech currently being launched at Nerdeen, as it makes it seem as though actions condemning the violent tactics that the IDF has employed against the Palestinian people are an act of anti-Semitism, which is completely untrue.

Beyond sharing these demands on Instagram and across social media, you can also take action in support of Nerdeen by emailing the following administrators at CUNY Law to let them know that you support CUNY NLG’s demands and stand with Nerdeen.