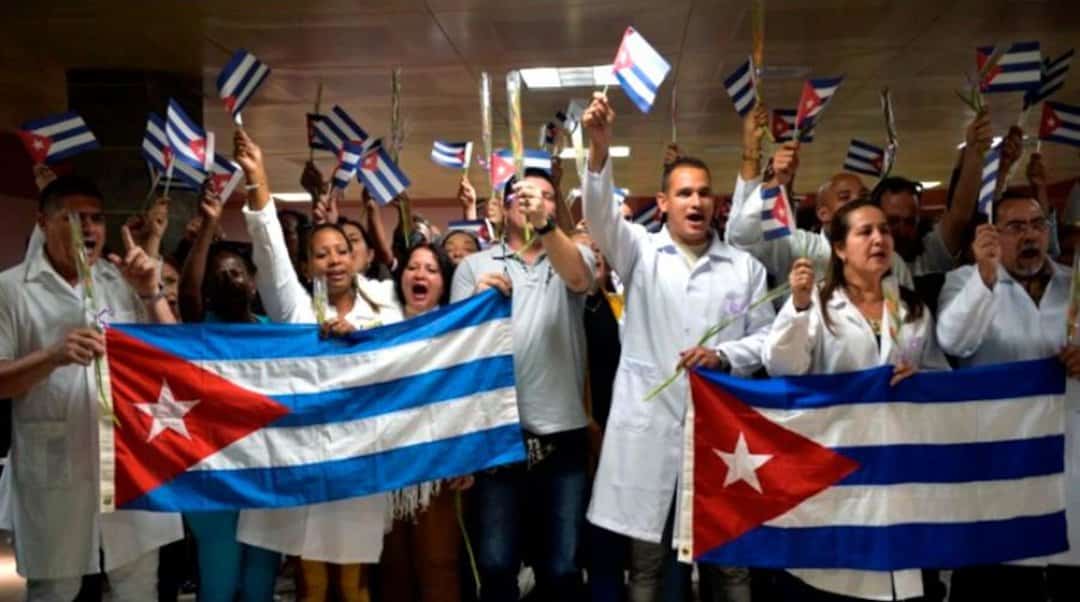 The limited measures implemented by President Barack Obama towards U.S.-Cuba normalization are being steadily dismantled by the Trump administration. Between January 2019 and March 2020, many new measures were implemented against Cuba and incrementally announced.  In April, after a shipment of coronavirus aid delivery to Cuba was blocked, the Associated Press reported: “The embargo has exceptions for food and medical aid, but companies are often afraid to carry out related financing or transportation due to the risk of fines or prosecution under the embargo.” Despite the blockade, Cuba has created an economy and society that provide universal health care and free education.

The Saving Lives Campaign initiated by our organizations believes that enhancing the 60-year-old U.S. blockade during a pandemic is nothing short of criminal.  We demand that the United States government lift the blockade, end all punitive sanctions and collaborate with Cuba, facilitating their internal and external efforts to control the pandemic.

Cuba’s success in fighting COVID-19 is evidenced by their low rate of infections and COVID-19 related deaths. “Cuba has a lower infection rate than most countries in the hemisphere … and [Cubans] are currently 42 times less likely to contract the virus than people in the United States.”  Comparatively, Cuba has 11.33 million people. In Cuba as of Sept. 24, 2020, there have been 5,310 people infected with COVID-19 and 118 deaths, with 577 hospitalized.

Similar incredible contrasts can be made with Cuba’s COVID-19 record and the appalling statistics and human suffering in Brazil, Ecuador, Peru and across the Americas.

What are the Cubans doing right?

Three U.S. municipalities and two U.S. central labor councils would like to know the answer to that question, but are prevented from deeper sharing by the unilateral U.S. economic, financial and commercial blockade. In California, the Richmond and Berkeley city councils and the San Francisco Board of Supervisors unanimously passed resolutions calling for medical collaboration with Cuba, all since May 5. The Sacramento Labor Council and Seattle’s Martin Luther King Labor Council have joined in. In Quebec, Louise Gareau, executive secretary, Office of the President of the CSN (Confédération des syndicats nationaux), confirmed by email that the 300,000-member labor organization supports medical collaboration between the U.S., Cuba and Canada. The hundreds of Saving Lives endorsers include medical doctors, elected officials and progressive actors and artists.

The Saving Lives Campaign’s aim is to facilitate medical and scientific collaboration between the peoples of our countries, and between government authorities in the U.S. and Canada with Cuban counterparts. Cuba’s health care system has proven effective in identifying, treating and containing COVID-19, while the U.S. and much of Latin America fight rising infection and mortality rates. Cuban medical care, with its preventative focus and humanist values, includes a powerfully advanced biopharmaceutical industry, allowing for the development and distribution of medications.

Soberana 01 is the first candidate from Latin America or the Caribbean of a SARS-CoV-2 vaccine. Registered by the World Health Organization, Cuba’s Finlay Vaccine Institute initiated clinical trials on Aug. 24, 2020, by testing 676 volunteers. Cuba willingly shares its medical experience with the novel coronavirus by publishing its extensive protocol.

Yet, at a time when countries should be working together, sharing scientific discoveries and medications, Cuba’s achievements are either ignored, or in the case of Cuba’s Henry Reeve Brigades, absurdly slandered and denigrated by State Department head Mike Pompeo and Trump as “human trafficking.”

Medical professionals in the Henry Reeve Brigade refute these accusations, explaining that their work is voluntary in a short video produced by the new media outlet Belly of the Beast.  Having received a free education, and knowing that their families will be cared for financially in their absence, these health care workers view their humanitarian efforts as an expression of the principles and ideals that the Cuban Revolution has taught them, and that they have fought to maintain. On Sept. 26, Cuban Henry Reeve Brigade doctors currently on assignment will speak publicly about their service.

Disgracefully, instead of applauding Cuba’s medical internationalism, Trump threatens any country requesting Cuban assistance, while failing to provide an alternative for the avertible crisis in the U.S. and across the Americas. Under this pretense, countries such as Ecuador, Colombia, Brazil, and now Panama, have refused Cuban health care workers, while their death rate soars. “Cubans are currently 57 times less likely to contract the virus than Brazilians.”

The General Assembly of the United Nations has increasingly voted to lift the blockade since 1992, with 187 voting in favor in 2019, with only 3 against. Yet the U.S. Congress remains complicit with this cruel blockade policy which hurts the Americas, the U.S., Canada, Latin America and the Caribbean by limiting our access to the scientific and medical advances developed by Cuba’s advanced biopharmaceutical industry.

It is time for all governments to recognize the need for scientific and medical collaboration if we are to eradicate or contain the pandemic. People continue to suffer needlessly and will continue to die alone, without it. This virus hits hardest the working classes and impoverished, disproportionately among Black, Brown and Indigenous communities. Cuba’s prior experience in battling epidemics and natural disasters is beneficial for containment of the virus. With collaboration, we can realize this goal. The U.S. and Canadian governments must put aside historic conflicts and alliances to acknowledge the mutual benefits for the peoples of all our countries of U.S.-Cuba-Canada medical cooperation. Let us stop playing politics and start saving lives.