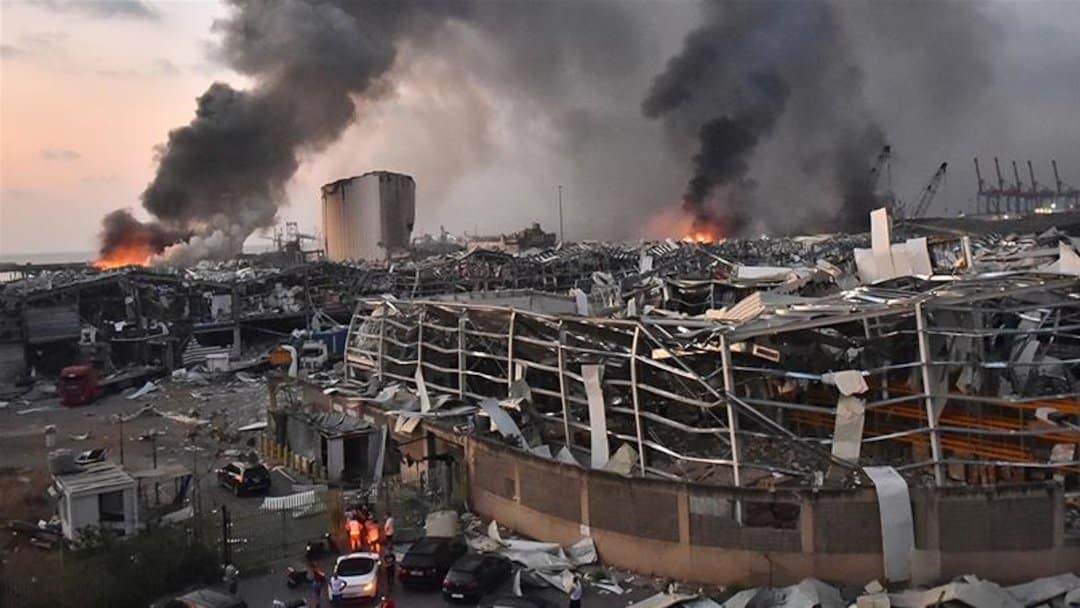 A powerful explosion ripped through the port of Beirut, Lebanon’s capital, on Aug. 4. At least 171 people have died and thousands were injured, including many Syrian and other non-Lebanese workers. Hundreds of thousands were made homeless by the disaster.

Beirut is the country’s main port. For Lebanon’s nearly 7 million residents, the devastation will have an untold impact on their access to food, medicine and other essentials for years to come.

Lebanon’s poorest will suffer the most. That includes nearly half a million exiled Palestinians living in 12 camps across Lebanon. Hundreds of thousands of Syrian war refugees and workers from Africa and South Asia also live there. Lebanon has more refugees per capita than any other country in the world.

While the West Asian country reels from the explosion and struggles to begin its recovery, the governments of the U.S., France and Britain — along with their regional attack dogs, Israel and Saudi Arabia — have seized upon the tragedy to ratchet up pressure on Lebanon.

Warships from Britain and France — Lebanon’s former colonial ruler — now patrol the waters of the Beirut port, under the pretext of providing “humanitarian aid.” Meanwhile, French President Emmanuel Macron rushed to Beirut on Aug. 6, not for altruistic reasons, but to make a thinly veiled power grab.

The U.S. and European Union powers are eager to exploit the tragedy to destroy Lebanon’s fragile balance of political and religious forces, established by the Taif agreement that ended the 1975-1990 civil war, and particularly to strike a blow against the anti-imperialist Resistance bloc led by Hezbollah.

It was this movement that drove Israeli, U.S., and French occupation forces out of Lebanon and rebuffed an Israeli invasion in 2006. Its main base is among Shia Muslims, Lebanon’s largest community, but its deeds have won it support in all Lebanese communities. The Resistance bloc is part of the regional Axis of Resistance that includes Syria and Iran.

Under pressure, Prime Minister Hassan Diab’s government resigned on Aug. 10. He will stay on as caretaker prime minister until a new government is agreed upon.

On Aug. 11, just a week after the Beirut explosion, three Israeli tanks violated Lebanon’s southern border and fired a phosphorus bomb. The provocation came as Israel continued its nightly rain of U.S.-made missiles on the desperate and besieged people of the Gaza Strip. As of Aug. 20, those attacks were in their tenth night.

Hezbollah has given aid and solidarity to the Palestinian people of Gaza in their fight against the brutal U.S.-Israeli siege.

In the hours after the disaster, a narrative was quickly fashioned by the Western media and local right-wing forces claiming that the explosion was caused by a cache of Hezbollah weapons stored at the Beirut port.

These charges were swiftly refuted by Hezbollah and other sources. But their real aim was to rally the anti-resistance forces inside and outside Lebanon.

In a televised speech on Aug. 7, Hezbollah Secretary General Sayyed Hassan Nasrallah said, “I categorically deny the claim that Hezbollah has arms cache, ammunition or anything else in the port.

“Hezbollah is bigger, greater and more noble than to be taken down by some liars and inciters, who are trying to push for civil war,” said Nasrallah. “They have failed before and will fail again.”

On Aug. 18, Lebanese President Michel Aoun, in an interview with the Italian newspaper Corriere della Sera, confirmed that it was “impossible” for Hezbollah to be responsible for the blast, since the resistance does not store weapons in the Beirut port.

In fact, the blast was caused by 2,750 tons of ammonium nitrate removed from an abandoned ship and stored in a warehouse at the port since 2014 — long before Prime Minister Diab took office in January 2020.

The compound can be used to make both fertilizer and explosives. What sparked the blast is still unknown.

As first reported by the New York Times, the U.S. government knew about the large amount of ammonium nitrate stored at the Beirut port and the danger it posed since at least 2016.

“According to the cable, the consultant, under a contract with the U.S. Army, advised the Lebanese Navy from 2013 to 2016. The cable said that the adviser ‘conveyed that he had conducted a port facility inspection on security measures during which he reported to port officials on the unsafe storage of the ammonium nitrate.’

Officially, the U.S. State Department claimed to know nothing about it.

U.S. sanctions, tied to Washington’s decade-long war of aggression against neighboring Syria, were tightened in June in an effort to “starve” Lebanon, according to the Resistance.

International sanctions have had a terrible effect on the country’s economy. Before the COVID-19 pandemic hit, poverty was estimated at 45 percent and unemployment at 30 percent.

“In March, as the economy faltered, Lebanon defaulted on a $1.2 billion payment for foreign bonds for the first time in the country’s history,” reported the New York Times. “Diab’s government released a recovery plan on April 30 that said the economy was ‘in free fall,’ and that Lebanon would seek $10 billion in aid from the International Monetary Fund. But multiple rounds of talks failed to reach an agreement and the aid never came.”

Mass protests raged throughout 2019, driven by Western-imposed economic hardships. The protests have revived in the aftermath of the port disaster. The U.S., France and their allies are working overtime to support the most reactionary, anti-Hezbollah and anti-Iran elements of the protest movement — some of whom have hanged or burned effigies of Resistance leaders. These include the fascist, anti-Muslim Lebanese Forces and Kataeb Falange party, and the Saudi-funded Future Movement.

The Western powers want to misdirect mass anger — which should rightly be aimed against them — toward Hezbollah, which has fought to defend the Lebanese people from imperialist and Zionist aggression.

Some left forces, including the Lebanese Communist Party, have also taken part in protests. The LCP issued a statement denouncing government corruption while opposing Western intervention. It calls for compensation to the victims of the blast and a nonsectarian government in Lebanon.

Iran has called on Washington to drop the sanctions in the wake of the explosion. “The blast should not be used as an excuse for political aims … the cause of the blast should be investigated carefully,” Iran’s Foreign Ministry spokesperson Abbas Mousavi said on Aug. 10.

French President Emanuel Macron wasted no time attempting to assert the former colonial ruler’s authority. On a supposed humanitarian visit on Aug. 6, Macron stepped directly into Lebanese politics, calling for the formation of a “national unity government” to be negotiated under French auspices, and encouraging right-wing elements among the protesters.

“I will propose a new political pact [in Lebanon] this afternoon,” Macron told protesters in Beirut, who were chanting “revolution” and “down with the regime.”

“I will return on the first of September, and if they [the Lebanese leaders] can’t do it, I’ll take my political responsibility,” he said.

Macron’s hypocrisy wasn’t lost on many Lebanese and international observers, who pointed to his repression of France’s “yellow vests” movement and union-led protests against austerity programs he champions at home.

“Perhaps the clearest example of Macron’s duplicity is the continued imprisonment by France of [communist guerrilla] Georges Ibrahim Abdallah, imprisoned by the French state since 1984 and eligible for release since 1999,” noted the Samidoun Palestinian Prisoners Solidarity Network. “The Lebanese government has officially requested his release and repatriation, yet he continues to be held hostage while calls for his release mount, especially in France and Lebanon.

“Indeed, Macron’s visits to the streets of Gemmayzeh in the devastated Lebanese capital were repeatedly greeted with calls of ‘Freedom for Georges Abdallah’ by youth who refuse to be treated as colonial subjects once again by France, reject the complicity of many Lebanese politicians and see Georges Abdallah as a symbol of Arab and anti-imperialist dignity, resilience and resistance.

“Many Lebanese journalists and activists denounced the neocolonial hypocrisy demonstrated by Macron, emphasizing that his objective is to impose ‘structural reforms’ on the country according to the requirements of the International Monetary Fund.”

Mona Tahini, a Lebanese journalist with al-Manar TV, was prevented from asking Macron a question during his press conference in Beirut, while other reporters were allowed to ask multiple questions and pose for selfies with the French president. Tahini wears a hijab.

A virtual “humanitarian aid” conference headed by Macron on Aug. 16 reportedly gathered $300 million in pledges. But the organizers will not turn over the money to Lebanese authorities or communities; they will channel it through Western-approved, nongovernmental organizations and United Nations agencies.

The hardships and frustration fueling protests in Lebanon are real. But they cannot be divorced from the long history of Western imperialist intervention that divided Lebanon and Syria and redrew their borders in 1920; carried out unspeakable acts of theft and terror against the people; and created a hierarchy based on religious affiliation, with French-identified Christians at the top and mostly poor and working-class Shiite Muslims at the bottom.

Throughout the 20th century, the U.S. and European powers continued and deepened the exploitation and division, closely connected with the removal of the Palestinan people from their homeland, to secure control of oil profits and strategic military positions.

And today, the U.S.-European response to the Beirut tragedy is closely connected with Israel’s genocidal war on Gaza and the West Bank, the “deal” between Israel, the United Arab Emirates and Washington to normalize the occupation, U.S. theft of Syrian oil, sanctions and threats against Iran, Pentagon provocations over trade between Iran and Venezuela, etc.

For anti-imperialists and anti-war activists here, the urgent need is to demand:

No to Washington-Paris intervention in Lebanon’s internal affairs! Self-determination for the people of Lebanon!