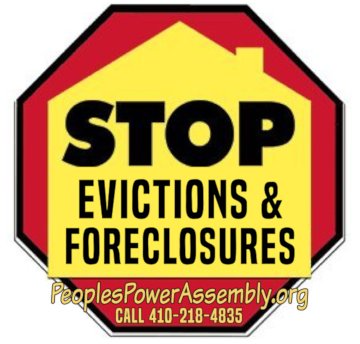 The Peoples Power Assembly is launching an Unemployed Workers Committee to Stop Evictions, Foreclosures and Utility Shutoffs. Its slogan is, “Through solidarity we can protect each other against capitalism and injustice.”

Here is the list of seven things the group plans to do:

Baltimore Peoples Power Assembly organizer Steven Ceci said: “This is a long-term project aimed at uniting workers in the community for our self-defense through solidarity. Our goal is to be able to declare eviction-free and foreclosure-free zones.”

The Rev. Annie Chambers, a PPA organizer and housing advocate at Douglas Homes Housing Project, stated: “If we can’t work, then how can we pay? We are demanding no evictions, foreclosures and utility shut-offs until this crisis is over.”

Chambers, along with the Ujima People’s Progress Party and the Peoples Power Assembly, distribute free food as part of the Food Is A Right Campaign from Monday to Friday at Douglas Homes in East Baltimore.

Ceci added: “Those most impacted are Black, Latinx and poor workers. In fact, it was the 2008 subprime mortgage scandal in combination with deindustrialisation and the loss of union jobs that stripped wealth from Black and Latinx families.”

The PPA sees the launch of this mutual aid group as a continuation of its protests against racism and police terror. It invites all groups and individuals to join and pledges to unite with all groups that want to stop evictions and defend workers and the poor.