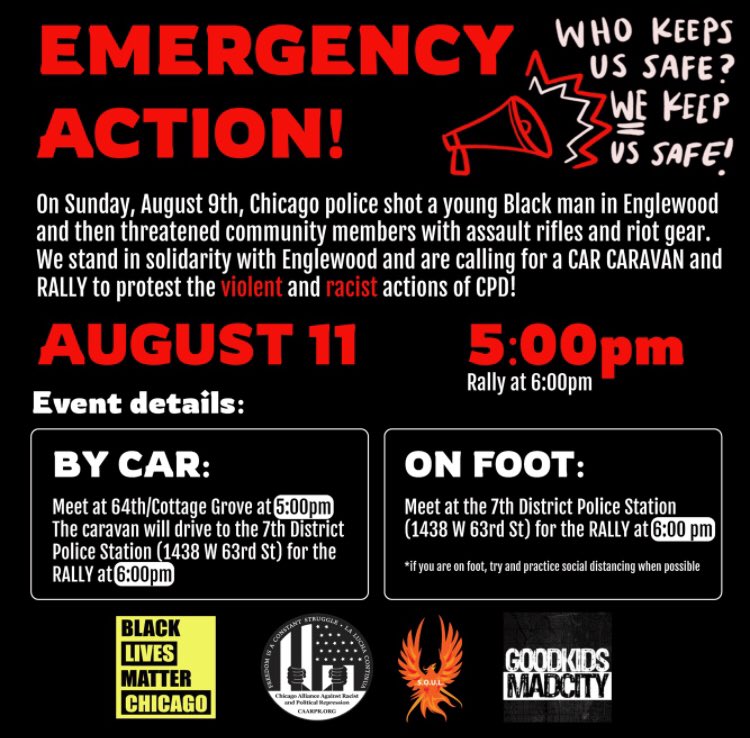 Join us for a car caravan and rally to demand CPAC and the defunding of CPD!

On Sunday, August 9th, Chicago police shot a young Black man in Englewood and then threatened community members with assault rifles and riot gear. Latrell Allen is currently in hospital fighting for his life after being chased and shot five times by CPD. Police are claiming, without evidence, that he shot at them first. The police have charged Latrell with attempted murder after they attempted to murder him. This is yet another instance of police demonizing a victim of police violence to justify their atrocities.

When people from the neighborhood gathered on the scene, they were met with hundreds of CPD officers armed with assault rifles. This was a clear escalation towards a community that just experienced a traumatic attack on one of their own. Mayor Lori Lightfoot has said nothing about the officers who shot Latrell Allen and assaulted protesters in Englewood, instead focusing on looting and the well-being of the police department. Instead of meeting the people’s demands, Lori Lightfoot has ordered the raising of the bridges downtown and has deployed more resources towards policing.

The loss of property on the Mag Mile is nothing compared to the loss of life inflicted by CPD. People are furious at the way police have behaved as an occupying force in Black and Brown communities for decades, killing, torturing, and kidnapping people with impunity. People are sick and tired of losing schools, hospitals, mental health facilities, and other resources while the police budget continues to grow. What Lightfoot calls looting is an expression of rage from people who have been terrorized and neglected by the city for years. The people demand that CPD be defunded with that money being invested in communities instead. The people demand that the city enact CPAC so communities can hold police accountable and prevent police violence.

CPD is the biggest gang in the city, and Lori Lightfoot has not hesitated to unleash them on protesters, Black, Latinx and other oppressed people. We need CPAC to put the power in OUR HANDS to end these attacks on our communities!