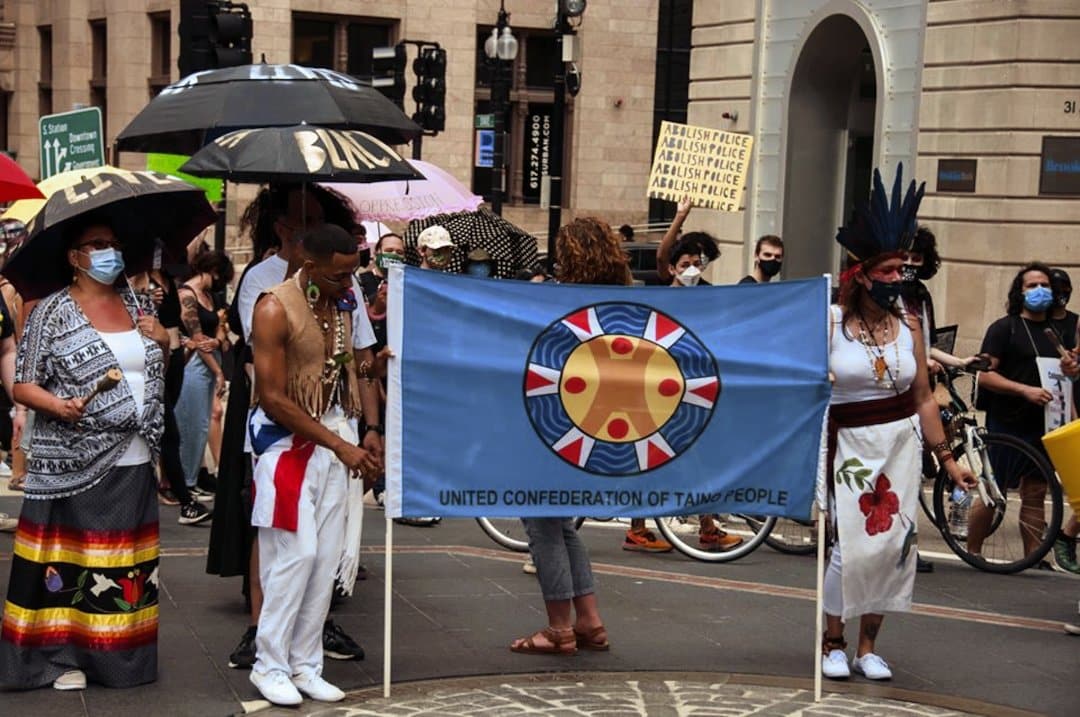 On July 8, multiple Boston-area Indigenous, Black and Afro-Brazilian groups held a rally and march demanding police abolition, the immediate removal of symbols of white supremacy, and investment in the economic development and self-determination of BIPOC (Black, Indigenous and People Of Color).

Speakers called for the permanent removal of the hated Christopher Columbus statue at Boston’s waterfront and for the renaming of Faneuil Hall, named after a slaveholder and slave trader. Many at the rally called for structural change in Boston and elsewhere to address white supremacy and for an end to police brutality and disproportionately high death rates in Black and Indigenous communities.

After marching to City Hall, speakers demanded that Boston’s mayor and City Council honor Indigenous Peoples’ Day instead of Columbus Day. Mahtowin Munro, spokesperson for IndigenousPeoplesDayMA.org and United American Indians of New England (UAINE), said: “It is time for everyone to acknowledge that this is a stolen land in a nation built by stolen peoples.

“We wish to express our solidarity with movements for Black Lives and against police violence. Our people have also been on the streets here and elsewhere to support those demands, because of our centuries of ties with our Black relations and because our Native communities also suffer a disproportionate impact from police violence,” Munro explained.

“Politicians and others who now say they want to work for racial justice need to ensure that Indigenous voices and perspectives are included in the work, not erased or silenced.”

A Palestinian speaker drew many parallels between what is happening in the U.S. and in Palestine, where Zionists continue to brutally oppress Palestinians and steal their land, with a recent annexation of a large portion of the West Bank and further incursions in East Jerusalem. Several speakers demanded an end to capitalism and colonialism.

In addition to speakers, there were Taíno and Afro-Brazilian ceremonies, dance and music. The Boston march strengthened the bonds between the communities here and was one of many Black and Indigenous solidarity actions taking place around the U.S. in recent weeks.