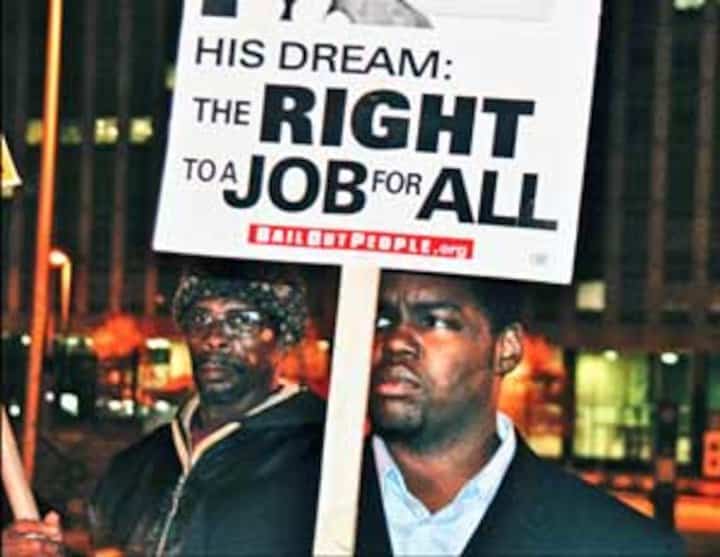 Over 20 million workers are unemployed in the United States. That’s a catastrophe. Joblessness hasn’t been this high since the Great Depression of the 1930s.

Extended unemployment benefits under the Coronavirus Aid, Relief and Economic Security (CARES) Act are set to expire July 31. The various state moratoriums on evictions and utility shut-offs are also scheduled to end soon.

What are people supposed to do then?  COVID-19 infections are spiking in Arizona, California, North and South Carolina, Florida, and Texas. Even when this pandemic ends, or at least slows down, many of the lost jobs are not coming back.

That doesn’t bother Larry Kudlow, President Trump’s $185,000 per year director of the National Economic Council. He thinks “recessions are therapeutic.”

This millionaire collects $3,557 a week from the feds but doesn’t want to extend the $600 per week federal unemployment benefit. Kudlow claims it’s a “disincentive” that will discourage people from going back to their jobs.

So people are staying home because they’re lazy? The continuing pandemic and massive job destruction have nothing to do with it?

Larry Kudlow is what white privilege looks like. He was fired from Wall Street’s now shuttered Bear Stearns bank in 1994 because of his cocaine addiction. But Kudlow never had to worry about being arrested for drug possession.

Lee Otis Johnson, the Black leader of Houston’s Student Nonviolent Coordinating Committee (SNCC) chapter, wasn’t so lucky. He was framed in 1968 for allegedly having one marijuana joint and sentenced to 30 years in prison.

It was fear of what tens of millions of suddenly jobless workers might do that forced Trump and Congress to cough up $600 per week and a stimulus check, too.

The millions of people who are marching in the streets, chanting “Black lives matter!” are why unemployment benefits may be extended and another stimulus check mailed out.

Why can’t everyone have a job?

Before it was destroyed, in the socialist Soviet Union everyone had a job. Unemployment was unknown. During the height of capitalist “prosperity” in the U.S., millions of workers are jobless.

The difference was that the Soviet Union had an overall economic plan. The industries belonged to the people. Soviet banks didn’t lend money to real estate sharks like Donald Trump.

While U.S. corporations and the federal and state governments have budgets — which are plans — capitalism can’t be controlled. Dog-eat-dog capitalist competition prevents it. As Karl Marx wrote, “Capital has a life of its own.” (No offense meant to dogs, who never eat other dogs; it’s just a saying that a capitalist first used to describe capitalist competition.)

The biggest monopolies employ thousands with marketing degrees who try to determine what goods and services can be sold in the capitalist market. But ultimately, “too much” stuff is produced.

How can this be? At least a billion people on earth go to bed hungry, including millions of people in the U.S.

Overcrowded housing is one of the reasons so many Black, Indigenous and Latinx people have died of the coronavirus. People need more health care, schools and transportation.

Capitalist overproduction has nothing to do with people’s needs. It’s producing more stuff than can be sold at a profit.

Every ten years or so since 1825, a capitalist economic crisis breaks out and creates more misery. COVID-19 accelerated the current recession, but it started earlier, particularly with the overproduction of oil.

Frederick Engels — the friend and co-worker of Karl Marx — described how a capitalist economic recovery is guaranteed to turn into another recession:

“The industrial trot breaks into a canter, the canter in turn grows into the headlong gallop of a perfect steeplechase of industry, commercial credit, and speculation, which finally, after breakneck leaps, ends where it began — in the ditch of a crisis.”

Capitalist production often needs a sudden increase in the number of workers, like during the Christmas buying rush. Unemployed workers are recruited from the industrial reserve army to handle the extra work.

That’s a secondary feature of the industrial reserve army. Its main function is to increase the average rate of profit.

If there was a permanent shortage of labor under capitalism — instead of a continual surplus of workers seeking employment — it would be impossible to maintain the level of exploitation. Working and poor people wouldn’t tolerate being overworked and abused.

Samuel Insull — a 1920s Midwest utilities czar whose $3 billion empire collapsed in the Great Depression — best expressed the thought of his fellow exploiters: “My experience is that the greatest aid to the efficiency of labor is a long line of men waiting at the gate.” (That is, a mass of unemployed women and men trying to get hired.)

Hiring discrimination not only means that whites have the better paying jobs. It means that a white applicant is more likely to be hired for a lousy paying job.

This material factor has helped capitalists poison the minds of too many white workers. But look what’s happening now.

The Black Lives Matter movement has gotten the support of millions of whites across the U.S. The wealthy and powerful are terrified.

When the Great Depression started 90 years ago, there was no unemployment compensation or welfare. The Communist Party raised the slogan “Don’t starve, fight!” and organized unemployment councils.

Despite police attacks and even killings, communists stopped evictions in Chicago and other cities. A mass movement won unemployment insurance and Social Security.

Millions of workers were hired by the Works Progress Administration to build schools, parks and bridges. Organizing drives forced the biggest corporations, like General Motors and Ford, to sign union contracts.

We can do even more today. Many union members are supporting the Black Lives Matter movement.

The Seattle Labor Council has expelled the local police “union.” The AFL-CIO should follow Seattle’s example and kick out the cops.

The labor movement needs to demand “A Job is a Right!” and “Jobs not Jails!” Unemployed councils have to be started again.

Millions of young people need jobs with union wages and union benefits. The rich can pay for it.

Evictions and foreclosures of homes have to be stopped. So do utility shut-offs. The water must be turned back on!

We can win if we organize and struggle. We must win millions to the need for a socialist revolution that will abolish unemployment forever.