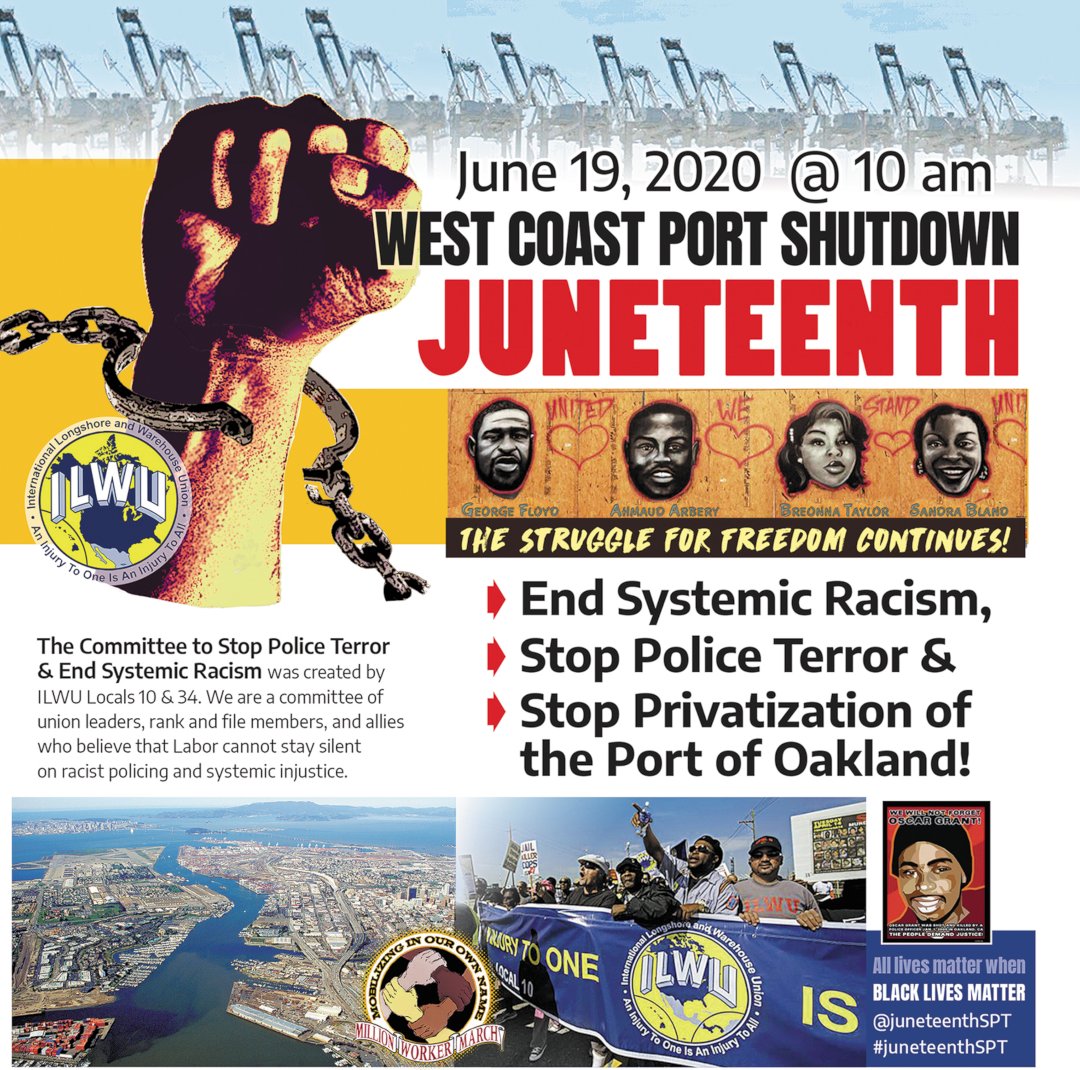 On Juneteenth, an estimated 10,000 people flocked to the Port of Oakland in California’s Bay Area to participate in the “West Coast Port Shutdown.” The Juneteenth rally started with longshore workers at the Port of Oakland holding a work stoppage. The massive group then marched to Oakland City Hall to hear from labor leaders. Watch the video at https://tinyurl.com/ydbg8noy.

The International Longshore and Warehouse Union called the strike for June 19 to shut down all 29 ports on the West Coast for eight hours. They demanded an end to white supremacy, police terror and plans to privatize the Port of Oakland, which would take away essential jobs for working-class African Americans in the Bay Area. They called for unions across the country to join them to take the lead in the fight against racist police terror.

Juneteenth commemorates the day that news finally reached Texas that the Confederacy had been defeated and that slavery had been abolished more than two years earlier in 1863.

Calling for labor to take action, Willie Adams, the first Black president of the ILWU, said: “Our union has a long history of confronting racism on the job, in our community and around the world.” Trent Willis, president of ILWU Local 10, said: “The wealth gap for Black and Brown sisters and brothers is larger than ever in history. It’s time to push back!” The Juneteenth action was initiated by ILWU Locals 10 and 34.

Clarence Thomas, a retired ILWU official and an initiator of the Million Worker March movement, said: “ILWU Local 10 is in the vanguard of the labor movement protesting and resisting acts of racist police terror on African Americans and other people of color for more than a decade. On Juneteenth, the coastwide action at the point of production will demonstrate the power of the working class for radical change.”

The United Auto Workers said that its members and allies across the globe paused work for 8 minutes and 46 seconds to honor George Floyd on Juneteenth. According to United Domestic Workers, AFSCME Local 3930, San Diego labor union members joined in a Juneteenth Black Lives Matter caravan that took them from San Diego to the La Mesa Police Department headquarters.

Boots Riley tweeted that some Tesla workers in the Bay Area were doing a direct action at the Tesla factory on Juneteenth. Organizers of the Atlanta protests against the death of George Floyd and Rayshard Brooks called for a general strike of Black workers on that day, #StrikeForBlackLives.

The Juneteenth strike took place after three weeks of walkouts and wildcats that spread coast to coast. A rank-and-file strike wave against deteriorating conditions and an economic slowdown began early in the pandemic. Black and Brown workers, who were already struggling against the impact of racism, were more devastated than anyone. The police murders of George Floyd and Breonna Taylor happened at a catastrophic time. The national revolt against racist policing was ignited.

Payday Report says the protests against police terror have more than doubled the number of strikes reported. They have counted more than 500 labor actions since the protests began. Payday says many strikes aren’t reported and that the numbers are higher than they can track. “If the size of these strikes last week is any indication, Juneteenth will likely be the largest day of strikes.”

When protests erupted in late May against the murder of George Floyd in Minneapolis, members of Amalgamated Transit Union Local 1005 refused to help the police transport protesters to jail.

Local 1005 issued a statement in solidarity with the protests on May 28: “This system has failed all of us in the working class from the coronavirus to the economic crisis we are facing. … This system has failed people of color and Black Americans and Black youth more than anyone else.” Ryan Timlin, president of ATU Local 1005, explained: “The union gives you protection to exert your rights.”

Bus drivers with support of transit unions in cities like Boston, Cincinnati, Dallas, Philadelphia and New York have refused to transport police to protests or to allow police to use their buses to take arrested demonstrators away from the communities where many of these drivers live. They say this is a misuse of public transit.

On June 9, work on U.S. ports ground to a halt. On the West Coast, the ILWU and on the East Coast members of the International Longshoremen’s Association stopped work to mourn George Floyd for the amount of time that killer cop Derek Chauvin knelt on his neck.

Hospital workers and rehabilitation and nursing center workers took similar actions. Members of 1199SEIU, the country’s largest health care workers’ union, knelt for 8 minutes and 46 seconds during a vigil. They networked through #WalkoutForBlackLives and #BlackLivesMatter.

Research workers in scientific centers and workers at universities have joined the #ShutDownAcademia and #ShutDownStem strike. In the state of Washington, a general strike is being observed.

The demand to disassociate police unions from the labor movement is becoming a central issue. Marxists have long argued that police, as a repressive arm of the capitalist state, are not workers and their organizations are not real unions.

On June 6, the New York Times carried the story “How Police Unions Became Such Powerful Opponents to Reform Efforts.”

The Writers Guild of America East formed the first resolution to remove the International Union of Police Associations (IUPA) from the AFL-CIO, saying, “As long as police unions continue to wield their collective bargaining power as a cudgel, preventing reforms and accountability, no one is safe.”

In New York state, 120 members of Workers United, a union representing 9,500 workers, joined the growing call to kick police unions out of the labor movement. The union statement says that “Conflating our mission with that of police unions undermines our solidarity. White supremacy is central to our system of policing — therefore, we urge the labor movement to cut ties with police unions.”

They demand that the AFL-CIO expel the IUPA, the labor federation’s major police union.