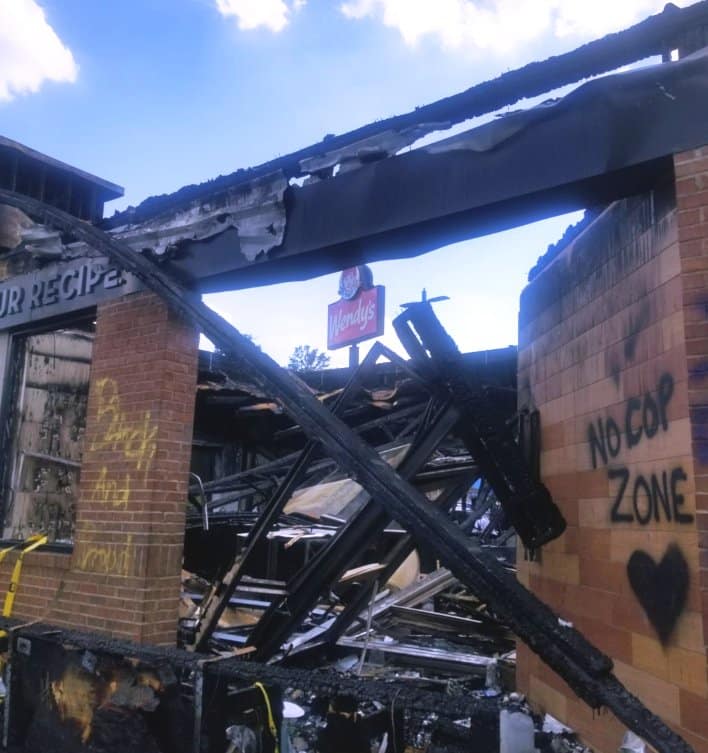 June 20 — There were people barbecuing, chanting and signing their name on a canvas at this sacred site on this beautiful sunny day at the Wendy’s where Rayshard Brooks was killed by Atlanta Police Department cops.

It was declared a cop-free zone by protesters last week, when they burned the Wendy’s to the ground in response to the brutal killing. The atmosphere was solemn as we walked toward the memorial that had been erected for Rayshard Brooks by his community.

As we entered the area, we were stopped by armed protectors, who wanted to make sure that we were Latinx. And then they waived us in saying, “They’re okay. They are with us.”

A white Dodge Charger suddenly stood still, burned rubber at the security point and took off. Within seconds, shots rang out from the car, while the armed protectors ran towards the danger, firing at the Charger and shouting to the crowd to take cover.

With no cops in sight, the armed protectors were providing safety for their communities. If it wasn’t for our protectors it could have been a massacre. But because they returned fire, the cowards inside the Charger took off with bullets chasing them. There was one injury, with one of the protectors being shot in the leg.

Witnesses at the scene stated that the exact same thing happened last night, when shots from a grey car with a white man and a white woman inside were fired into the crowd, injuring one. Several shootings have occurred in Atlanta throughout the week of struggle for Black Lives, a struggle that has captured the hearts of the working-class and oppressed people worldwide.

Black young men, armed and protecting their community, was an awe-inspiring sight to see! It was truly electrifying! These young people are not going to stand idly by and allow cops or white supremacists to shoot us down without fighting back. This is what true community-controlled public safety looks like!