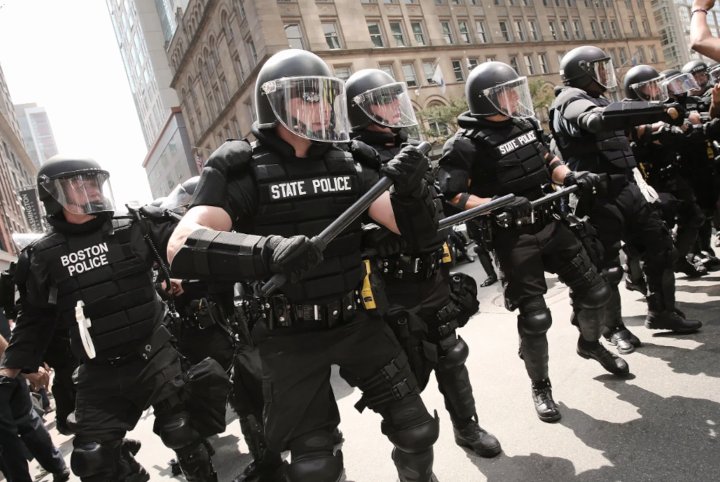 When the Pilgrims invaded the Wampanoag nation in the 1620s, they didn’t find any police or jails. Such cruelty wasn’t necessary.

That’s because there were no rich or poor in Wampanoag society. A community of equals doesn’t need armed thugs with badges. Billionaires and banksters didn’t require protection since these parasites didn’t exist.

Three people are killed by police on every average day in the United States. Almost 5 million people are jailed every year, many of whom can’t afford bail.

More than 10 million people are arrested annually by police armed with guns, clubs and mace. Almost any of these arrests can result in death or serious injury. Many do. All are humiliating.

The capitalist U.S. is a violent police state. The wealthy and powerful spend around $200 billion a year to have over 800,000 cops on the street and keep 2.3 million people in prisons. Every cent of this money is stolen from the working class, both employed and unemployed.

Violence is promoted by the capitalist state that pours drugs into poor communities. The “French Connection” that flooded New York City with heroin was a CIA connection. Drug-dealing gangsters who beat up striking French workers and communists worked in tandem with U.S. spy agencies.

Corrupt cops were also essential. Nearly 100 pounds of “French Connection” heroin were checked out of the New York Police Department’s evidence locker on Jan. 4, 1972, never to be found again.

Drugs help suppress communities from organizing for jobs, housing and health care. That’s why CIA-owned Air America, with 20,000 employees, drenched the U.S. with dope during the Vietnam War.

“The Politics of Heroin in Southeast Asia” by Alfred McCoy exposed these crimes. The CIA tried to stop the book from being published.

One of the reasons the ruling class sought to destroy the Black Panther Party, assassinating dozens of its members, was because the Panthers fought against drugs.

The Reagan administration created the crack epidemic to fund the contra terrorists who were trying to overthrow the Sandinista government in Nicaragua.

Crack served as an excuse to incarcerate hundreds of thousands of more people. Joe Biden was responsible for many of the laws that filled the prisons.

Banks make vast profits by laundering drug and crime money that’s estimated by the United Nations to be as much as $2 trillion a year.

Tear down the walls!

Poor people in Paris started the French Revolution by tearing down a hated prison called the Bastille on July 14, 1789.

The U.S. has thousands of bastilles. Every one of them should be torn down, including the immigration concentration camps where children are kept in cages.

Many of these U.S. bastilles are labeled “correctional institutions.” “Correction” was the term used by the slave masters to describe their torture of enslaved Africans.

Louisiana’s Angola State Prison is on the site of a former plantation that had the same name. It was called Angola because that’s where many of its enslaved African workers came from.

Albert Woodfox of the Angola 3 endured over 40 years in solitary confinement there. His comrade, Herman Wallace, spent 42 years in the “hole.” Wallace was released three days before he died of liver cancer.

Prisons are concentration camps for the poor. Ruchell Cinque Magee has been imprisoned in California for 57 years. That’s twice as long as Nelson Mandela was kept behind bars in apartheid South Africa.

Magee is being held because he joined Jonathan Jackson in trying to free Jonathan’s brother, Black Panther Party Field Marshal George Jackson. Jonathan Jackson was killed at the Marin County courthouse on Aug. 7, 1970, along with William Christmas and James McClain.

California Gov. Ronald Reagan tried to railroad Dr. Angela Davis to the gas chamber for Jonathan Jackson’s courageous deed, since he was one of her bodyguards.

We need to return Brother Ruchell and all the prisoners home to their families.

Every real revolution frees prisoners and fires the police of the old regime. Karl Marx gave this description of the world’s first working-class government, the 1871 Paris Commune:

“No more corpses at the morgue, no nocturnal burglaries, scarcely any robberies; in fact, for the first time since the days [of the revolution] of February 1848, the streets of Paris were safe, and that without any police of any kind.”

There are calls across the country to defund the police. Los Angeles Mayor Eric Garcetti is suggesting a mere $100 million to $150 million cut in the city’s $1.86 billion police budget.  New York City’s mayor, Bill de Blasio, is proposing an even smaller percentage cut to the $6 billion that its police department spends.

These shell games won’t stop killings by police. A genuine demand for defunding the police is offered by the December 12th Movement in New York City.

D12 member Iman Essiet stated, “It is time to redirect the millions of dollars budgeted to the police to community-based organizations and social agencies which are equipped to address issues such as drug abuse, domestic violence, children’s behavior in schools, mental health, homelessness, unemployment and poverty.”

The police have to be disarmed. Their guns, clubs, mace, rubber bullets, tear gas and pepper spray have to be outlawed. So do their patrol wagons in which Freddie Gray was killed via a “rough ride” by Baltimore cops.

Almost none of the police in the socialist People’s Republic of China have guns.

The Black Panther Party raised the demand for community control of the police. The National Alliance Against Racist and Political Repression and its executive director, Frank Edgar Chapman Jr., are demanding this today.

The NAARPR wants an “elected Civilian Police Accountability Council that holds police officers accountable for crimes such as assault, murder, torture and racial profiling.” Such a council could fire racist, sexist and homophobic cops.

The struggle for community control is a stepping stone to abolishing the police. A movement of millions in the streets can stop the killer cops.