On Friday, June 19, 2020, the International Longshore and Warehouse Union (ILWU) Coast Longshore Division will stop work for eight hours on the first shift in 29 West Coast ports from Bellingham, Wash., to San Diego in observance of Juneteenth. This action follows on the heels of the June 9, 2020, action in which the ILWU Coast Longshore Division stopped work coastwide at 9 a.m. for nine minutes in honor of George Floyd, adding to the chorus of voices protesting police brutality and systematic racism.

Juneteenth commemorates the end of slavery in the United States. On this date in 1865, Black slaves in Texas were told of their emancipation from slavery two years after the Emancipation Proclamation became effective, changing the legal status under federal law of enslaved African Americans in the Confederate states from slave to free. In the 157 years since the Emancipation Proclamation, our nation has made progress but the changes necessary to end systemic racism have come slowly or not at all, as the murder of Mr. Floyd on May 25, 2020, demonstrated.

On June 19, ILWU workers and their local unions up and down the West Coast will take action to reject racism, hate and intolerance at this unprecedented moment in time amid a global pandemic, domestic unrest made worse by a president who sows the seeds of division for his own personal gain and systematic racism laid bare by the recent brutal murder of Mr. Floyd.

As we stop work on Juneteenth, we do so in honor of our African American brothers and sisters and in recognition of the fact that we still have much to achieve as a society in order to carry out the promise of freedom in this country. On Juneteenth, we recommit ourselves to that promise. 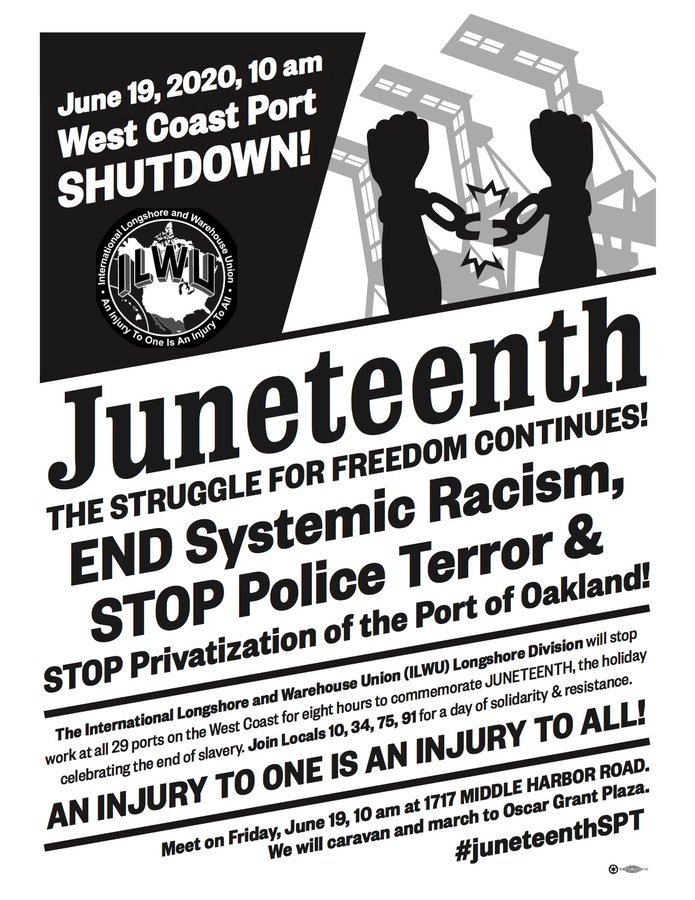