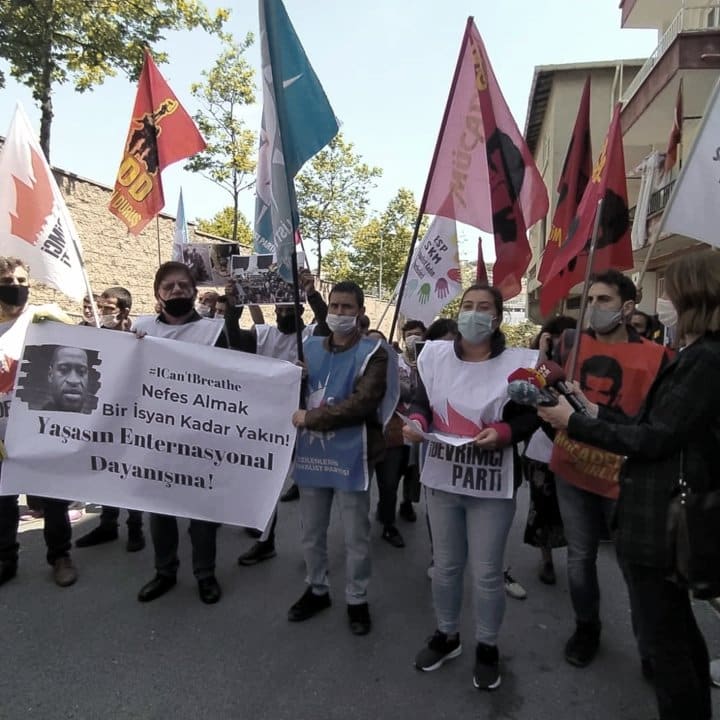 On June 4, the socialist organizations Devrimci Parti (Revolutionary Party), Ezilenlerin Sosyalist Partisi – ESP (Socialist Party of the Oppressed), Halkların Demokratik Partisi – HDP (Peoples’ Democratic Party), Mücadele Birliği (Struggle Union) and Proleter Devrimci Duruş (Proletarian Revolutionary Stance) made a statement to the media in front of the U.S. Embassy in Istanbul, Turkey, to condemn police violence and the killing of George Floyd, to greet the uprising and show solidarity with the people of the U.S.

After coming together, each organization raised their banner and chanted together, “Shoulder to shoulder against fascism!” and ”Long live international solidarity!” Then the statement was read out.

To the press and the public:

Floyd’s murder by the police was the last straw of the bloody history which started with Europeans enslaving and killing hundreds of thousands of Indigenous people to accumulate more capital from the moment they stepped onto the continent. George Floyd became the symbol of the racist violence of the police in the U.S. towards anyone who is not white, including immigrants. The uprising, which started as anti-racist, has deepened and turned against the capitalist system that produces and nurtures racism.

With the expropriation actions for the people’s vital needs and ensuring their equal distribution to the public, the people fighting on the streets also show that the target is not “revenge” but the system itself, by turning on the symbols of capitalism and the buildings belonging to the police which protect those symbols.

The ruling parties in Turkey, the Justice and Development Party (AKP) and Nationalist Movement Party (MHP), attack the people, workers and women with their police and their army and the watchmen under their command, and even suppress people, intervene in their lives and don’t even let people breathe. As a result of the deepening government crisis during the pandemic, many people have been subjected to violence and fines have been filed against them during the curfews and limitations, and it has become more common in order to prevent the social mobilization of the people to confront the contradictions all around us.

Ali Hemdan, a Syrian who was displaced by the AKP’s war policies and was trying to work to support his family, was shot in the chest by the police in Adana Province. Despite the fact that it was said he was “shot while fleeing,” the truth turned out to be extrajudicial execution. A 16-year-old Kurdish teenager was shot in the chest in the Kurdish province of Batman. Both of them were killed because it was after curfew and they were in the restricted group under the age of 20. Despite all this, the only action the police are supposed to take is to fine people, but they did not hesitate to shoot two young men.

The images of torture dished out by the policemen in Diyarbakır (also a Kurdish province) and the murder of Barış Cakan in Ankara for listening to Kurdish music are reflections of state policies. Just being a Kurd or an Arab, living in the suburbs of the city, being a worker, being a woman, means that their killer will remain unpunished. While the workers were thrown into hunger and death during the pandemic, law enforcement worked for the peace and the security of the capitalists. Those who sit in parks are either fined or subjected to violence, while the shopping malls are open.

In a process where workers under the age of 20 are subjected to curfew and workers are employed during the pandemic with precarious and special permits given by the bosses, those who attack people in the streets and fine them claim that they are fighting the pandemic.

In the face of this situation, the police attack against youth organizations marching on the streets of Kadıkoy, Istanbul, with the slogan “Your normal is your police violence!” reveals the state policy against those who put their words into deeds. While 29 young revolutionaries were tortured and detained, they raised the flag of struggle instead of surrender. (As of June 1 almost all COVID-19 safety measures have been abolished by the state, which disregards human life in order to keep the economy alive, under the name “Normalization Process,” despite the pandemic continuing.)