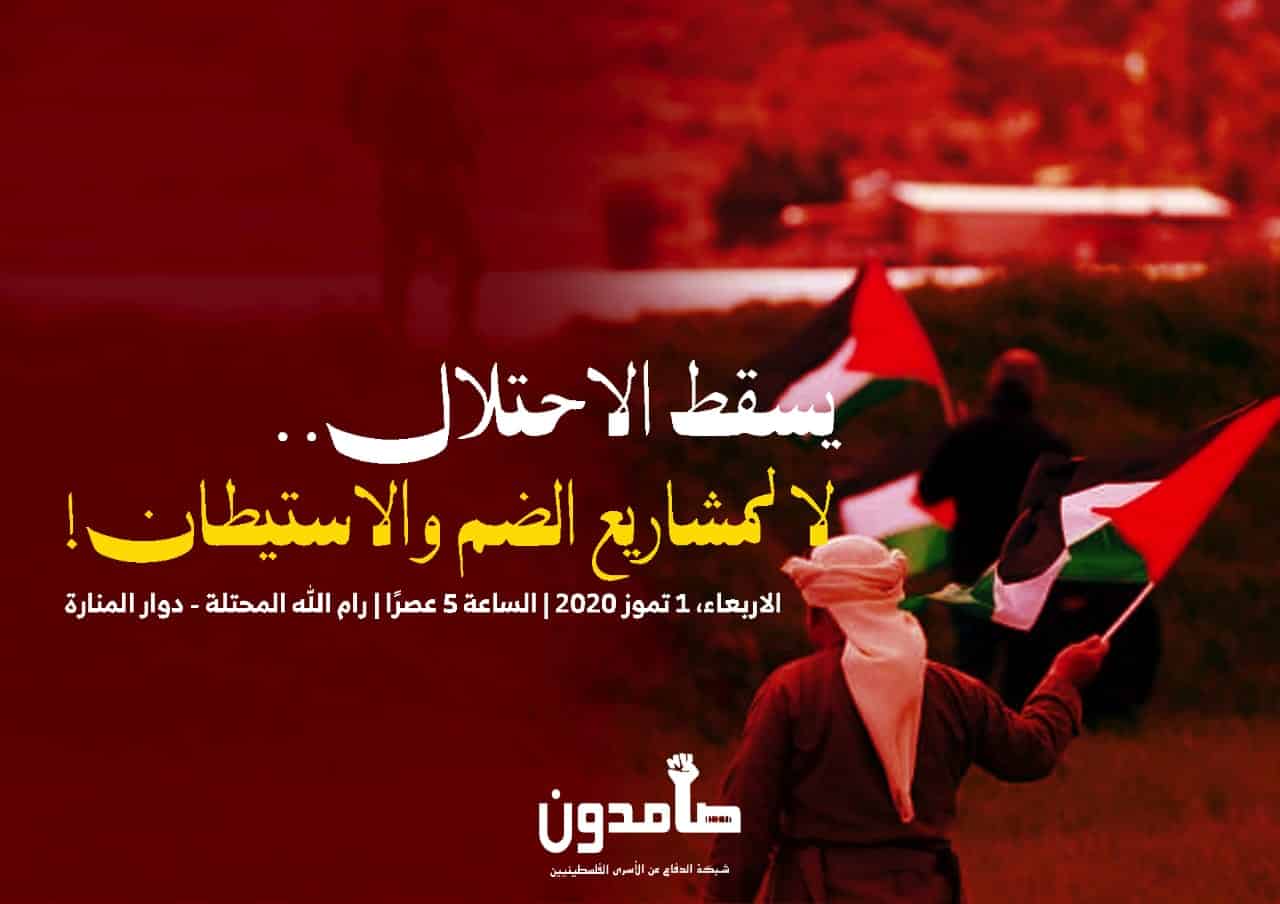 Samidoun Network in occupied Palestine and in the diaspora has issued the following call, originally in Arabic. As an international network, we fully join in this call and urge all supporters and friends of Palestine to take action on 1 July in support of the mobilization taking place in Ramallah, occupied Palestine, to confront Israel’s declared plans for the annexation of much of the occupied West Bank of Palestine.

We know that many Palestinians in exile and supporters of Palestine are, like Samidoun’s members, engaged in the uprisings and mass mobilizations taking to the streets to confront anti-Black racism and demand the defunding and dismantling of police and other structures of oppression. Confronting Israel’s annexation plans – fully backed by U.S. imperialism and inspired by Zionist racism – also comes as part of the global fightback against racism, colonialism and imperialism. Israel’s crimes are backed by $3.8 million in military aid from the U.S. each year as well as unlimited diplomatic, political and “security” support from Canada, the European Union, Britain, Australia and other imperialist powers.

Join us on 1 July to stand with the Palestinian people against Israeli annexation and for justice, return and liberation in Palestine. If you are organizing an event, a contingent or an action of any kind, please let us know – email us at samidoun@samidoun.net or message us on Facebook to ensure we publicize it!

Read the full statement and call to action below:

A call to Palestinians, Arabs and the people of the world….

Israel, the Zionist project fully supported by the United States of America and the reactionary forces in the region, is continuing upon the path of attempting to liquidate the Palestinian cause and Palestinian rights. It aims to impose its racist colonial regime through armed force, through repressive systems, prisons and detention center, and by spreading systematic destruction targeting the Palestinian people. Israel not only denies the national rights of the Palestinian people but also violates the most basic and natural rights of people and the land.

Our struggling Palestinian people, along with the Arab nation, the peoples of the region, and the progressive forces and liberation movements around the world, are aware of the true face of the racist, Zionist colonial entity and its expansionist nature and aims, now more than ever. They also see with full clarity how the occupation continues to implement its ongoing crimes and daily attacks against the Palestinian people. These crimes and violations do not subside for one hour, from killing, siege, mass arrests, home demolitions and the confiscation of Palestinian land through annexation and displacement projects. These daily crimes committed by the occupation forces take place in full sight and sound of the world, with no accountability, meaningful response or even a minimal international legal response.

The policies of the Zionist state and of the Trump administration standing together with Netanyahu and Gantz are the natural continuation of the ongoing history of each successive Israeli government and leadership from before the establishment of the Zionist state on our Palestinian homeland in 1948 until the present day. This right-wing alliance and the deeply, fundamentally racist structures propping it up are convinced that it may impose its will by force upon the Palestinian people because of the state of disintegration, weakness and disorganization on the Palestinian and Arab internal fronts. They target the homes and the very existence of the Palestinian people with impunity, from demolishing our homes in the Negev, Qalansuwa, Jerusalem and throughout the West Bank, to continuing the devastating siege upon our people in the struggling Gaza Strip, to denying our right to return and self-determination throughout the entire land of Palestine.

Today, the Zionist right-wing alliance prepares to plunder all of the Palestinian land in the occupied West Bank, creating a system of ghettos, cantons, strangulation and impoverishment, what it calls “facts on the ground” that target, first and foremost, the rights and interests of the Palestinian popular classes throughout all of occupied Palestine.

On the other hand, these Israeli policies are also acting to accelerate the resounding fall of all of the projects of surrender and illusion, the path of negotiations that began with the 1991 Madrid conference and the disastrous and devastating Oslo accords that destroyed the Palestinian people’s institutions and organizations. This current dragged the Palestinian national movement into a state of defeat, internal conflict and disintegration, confiscating the role of the Palestine Liberation Organization and emptying it of its popular and democratic role.

Today, the peoples of the world, and friendly and hostile forces alike, look toward the Palestinian response, not only to this latest Zionist crime but to this entire stage of destruction. Their eyes point to the critical importance of a popular Palestinian and Arab response to the annexation project and the imposition of the so-called “Israeli laws and sovereignty over Judea and Samaria.”

Accordingly, we call upon all national and Islamic forces, popular organizations inside Palestine and in exile and diaspora, as well as our labor unions, women’s organizations and student movement to participate widely and lead the popular march that will begin on 1 July 2020 in the city of Ramallah, as we march on the path of a unified Palestinian people and a unified Palestinian struggle, standing for the rights and dignity of our people – always and only, the rights and dignity of the Palestinian people.

We call upon the Palestinian people throughout occupied Palestine, everywhere in exile and diaspora, and all those who stand for justice in Palestine – all of the national forces, youth groups, civil society institutions and popular movements – to organize direct actions and popular mobilizations in the refugee camps, cities and villages and to formulate plans for joint action and mass organization. Together, we can mobilize the power and potential of the Palestinian people, the Arab people and the international movement for justice to confront the schemes of the occupier and its collaborators. The time has come to take a qualitative step to protect the Palestinian people and rebuild the foundations of the national liberation movement.

Our Palestinian people everywhere and the national liberation movement march on the path to liberation and return.

With loyalty to the martyrs and the struggling prisoners’ movement, the leadership of the Palestinian struggle.