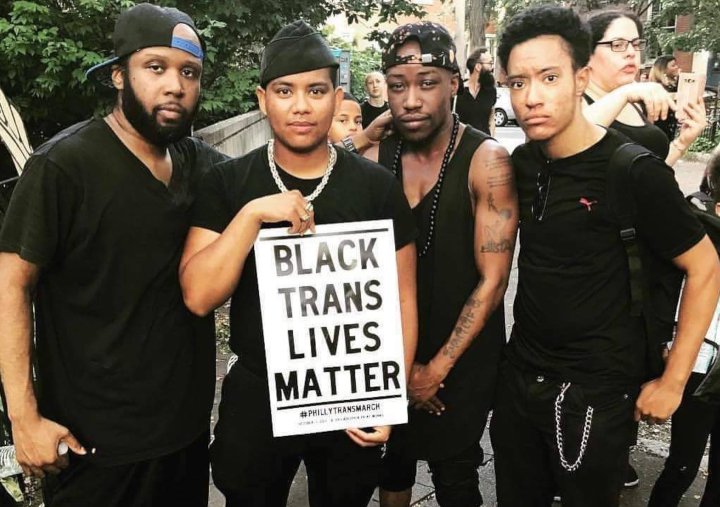 My partner has been pushing me to do TikTok lately. I personally hate TikTok, Vine and all other similar platforms. I think they represent humanity at its absolute worst, but I also have been pushing her to make our lives into a reality show, so that could be a bit hypocritical of me. I want to be seen and understood though. Or at least to have someone like me seen and understood. So I feel like celebrity is the only way to become normalized in this day and age.

If you can’t understand why it’s so important to see someone like yourself featured in the media and pop culture, then you should really start by checking your privilege, and then read on while I break it down for you.

Name your favorite married cishet white mom. It’s difficult because there are so many you know and you can turn your TV to any channel and find dozens more telling their stories. Now, name your favorite Black transgender mom raising babies with her partner and her partner’s husband. Take as much time as you want, but the answer is me by default because I’m the only one you can think of and that’s exactly my issue.

There aren’t any families like mine on TV even though it’s the perfect show already. We’ve got a transgender parent like the Kardasians, a trans child like Jazz, and the most parents you’ll find in a family outside of the Sister Wives (without their weird religious baggage). We’re a trust fund and a beauty pageant away from being a full TLC primetime lineup.

We have all the makings of a reality show without any of the benefits, so instead of people coming up and saying “Oh my god. You’re the woman from that show!” they talk mad shit behind my back and tell CPS I’m forcing my kids to be trans (because obviously after being suicidal for years due to my own gender dysphoria, I thought it’d be fun if my kid had to deal with it too.) Without any celebrity to normalize our life, we remain an oddity and people still think it’s fine to look at us like a circus sideshow. We’re still a joke, a cry for attention, or a perversion because that’s the only way anyone like us is portrayed in the media.

Worse still though is that we aren’t protected. In most states you can be fired, denied housing, and even denied medical treatment if you are a part of the LGBTQIA+ community. Many of those states are pushing to take away even more rights from us. Around the country, bills outlawing life saving medical care for trans youth are being pushed through the state legislatures. Parents of trans youth could soon be charged with child abuse for following the advice of the medical community. There are only nine states where a cishet man can’t receive a more lenient sentence for murder if he claims his attraction to the victim made him question his fragile sexuality.

I’m lucky enough to live in a state where LGBTQIA+ rights are protected by law. However, this same state has some archaic bigamy laws, essentially banning committed poly partners from cohabiting. Polyamory has yet to be given any real consideration by mainstream America. (When it is, it’s often centered around religious and misogynist bigamy practices.) When people hear about polyamorous relationships, their thoughts go to oppressive cults, or hedonistic sexual deviance and debauchery. The reality is much more mundane for many of us. My day looks very similar to that of most stay-at-home moms. With seven-year-old twins and an extremely active two-year-old, I don’t really have much time for cults or hedonistic sexual debauchery (at least not until my toddler is in daycare.)

I think by the time my kids are my age, our family won’t seem so weird. Multiracial families become more common every year. More people are becoming aware of transgender experiences. Most people believe that discrimination based on someone’s sexuality is wrong. Polyamory is becoming less of a taboo as people realize there can be options other than monogamy. I truly believe that families like mine won’t always be looked at as outsiders and freaks. It would be nice though if we had a celebrity spokesperson for families like mine.