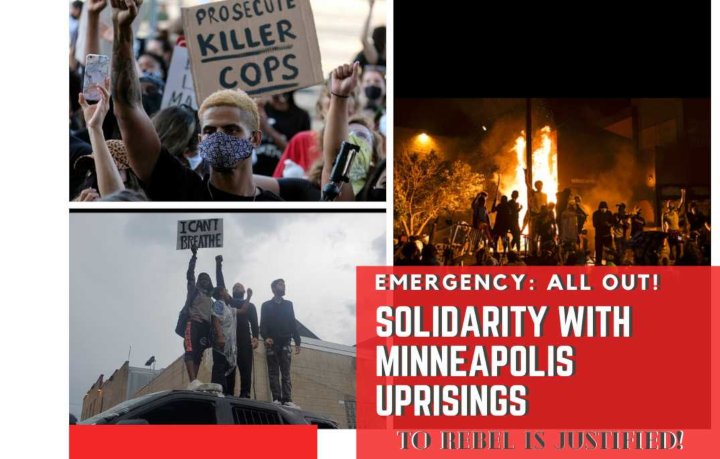 Join us for 7 days of action:

After all the protests against racist police terror, there has been no justice, but instead an escalation of racist violence encouraged by the white supremacist capitalist system against the Black community.

George Floyd, Breonna Taylor, Ahmaud Arbery, Modesto Reyes, Tony McDade and so many more unknown, gunned down for breathing while Black. The intensification of racism can also be seen by the number of Black lives lost to COVID-19 and the forcing of Black, brown, and low-paid workers back to work despite the threat to their lives.

In Minneapolis the Black community has said enough! They have risen up against the state machine, not to be ignored any longer. To rebel is justified, and these heroic freedom fighters are now combating the police and National Guard.

Trump is calling for the rebels to be shot, and many have been arrested. The protests and police station stormings are also being joined by many white youth. We have to stand strongly by the uprising and raise the call “To Rebel Is Justified.” We call for the immediate arrest and conviction of all four killer cops, the immediate removal of the police and National Guard in the Black community, and to dismiss all charges against the freedom fighters.

Join us to show your solidarity with Minneapolis!