Message of solidarity for African Liberation Day 2020: A Virtual Event from May 23 to May 25, called by the Maryland Council of Elders, the All-African People’s Revolutionary Party and others. This year’s African Liberation Day theme is “Imperialist Sanctions on Zimbabwe, Cuba and Venezuela are Acts of War: Africans Everywhere Must Fight!”

My name is Andre Powell and I am representing the Peoples Power Assembly in Baltimore and the Socialist Unity Party nationally.

The United States and the Pentagon continue their policy of brutal sanctions in an effort to control and destroy sovereign nations. The majority of sanctioned countries represent the oppressed world, whether former colonies fighting for their independence, those who are building socialism or those still battling against imperialism.

After the end of World War II, the U.S. and its Western European allies competed among each other to gain control over the countries of South America, Africa and Asia. Liberation struggles broke out as they tried to break free from decades of colonialism. The struggle for true independence was still out of reach for those countries, as the U.S. and European powers were able to assert neocolonial control over every aspect of life. In other words, they were independent in name only.

Western European powers and the U.S. colluded with each other as they chose those who would head the new governments of each country. If a particular leader would not do their master’s bidding, they were removed from power, many by covert means or direct murder, only to be replaced by another puppet. Additional methods of control included the International Monetary Fund and the World Bank, whose financial assistance is often tied to the implementation of austerity measures.

Currently, the U.S. has imposed sanctions against 39 countries around the world. The strongest sanctions are against the countries of the Democratic People’s Republic of Korea, Cuba, Iran, Venezuela, Zimbabwe, China and Nicaragua. On the African continent, the U.S. has imposed sanctions on Sudan, Burundi, the Central African Republic, the Democratic Republic of the Congo, Equatorial Guinea, Eritrea, Libya, Mauritania, Somalia, South Sudan, Cote d’Ivoire, Liberia and Rwanda, in addition to Zimbabwe. A total of 14 countries.

These sanctions are an act of war, just as if the U.S. were dropping bombs. All of these countries have a right to their own self-determination and national sovereignty. The Peoples Power Assembly and the Socialist Unity Party stand in solidarity with these countries as they fight against U.S. imperialism and its allies.

At this time, here in the U.S., another war rages against oppressed people and workers within our own borders.

This war on the working class is waged by bankers, billionaires, courts, police and other parts of the state apparatus of the capitalist system. The coronavirus pandemic shows how ineffective capitalism is in providing for the people during a major health crisis. They ignored the early warnings from the World Health Organization. They made no plans to prevent the spread and instead let it fester until the death toll climbed to numbers where it could not be ignored.

Now they put forth a feeble attempt to implement measures to prevent the further spread. They try to appease the country by buying us off with a measly emergency check while once again giving away billions of dollars to big business. The failure to manufacture personal protective equipment has resulted in the deaths of so many health care workers, just as the lack of ventilators has resulted in many patients dying in intensive care units.

Initially, it was kept hidden from the news media and public that Black and Brown people were dying in disproportionately higher numbers. The nation’s prison population, which is 80 percent Black, are sitting ducks trapped in what are literal death camps. The same can be said about immigrant detention camps.

While we fight for our lives on one front, the fight against police terror and white supremacy continues. The Ahmaud Arbery case, reminiscent of the murder of Trayvon Martin, has illustrated that racist violence is deeply embedded in the system.

Unity against the capitalist onslaught of sanctions against the countries of Africa will lead to the ultimate victory of their right to self-determination, free from imperialist control. That same unity will beat back the racist atrocities in this country, whether they are from the barrel of a gun or institutionalized in written policies of the government.

The Peoples Power Assembly and the Socialist Unity Party support the demands of African Liberation Day for both the continent and here in the U.S. Solidarity is the key to people’s victory. 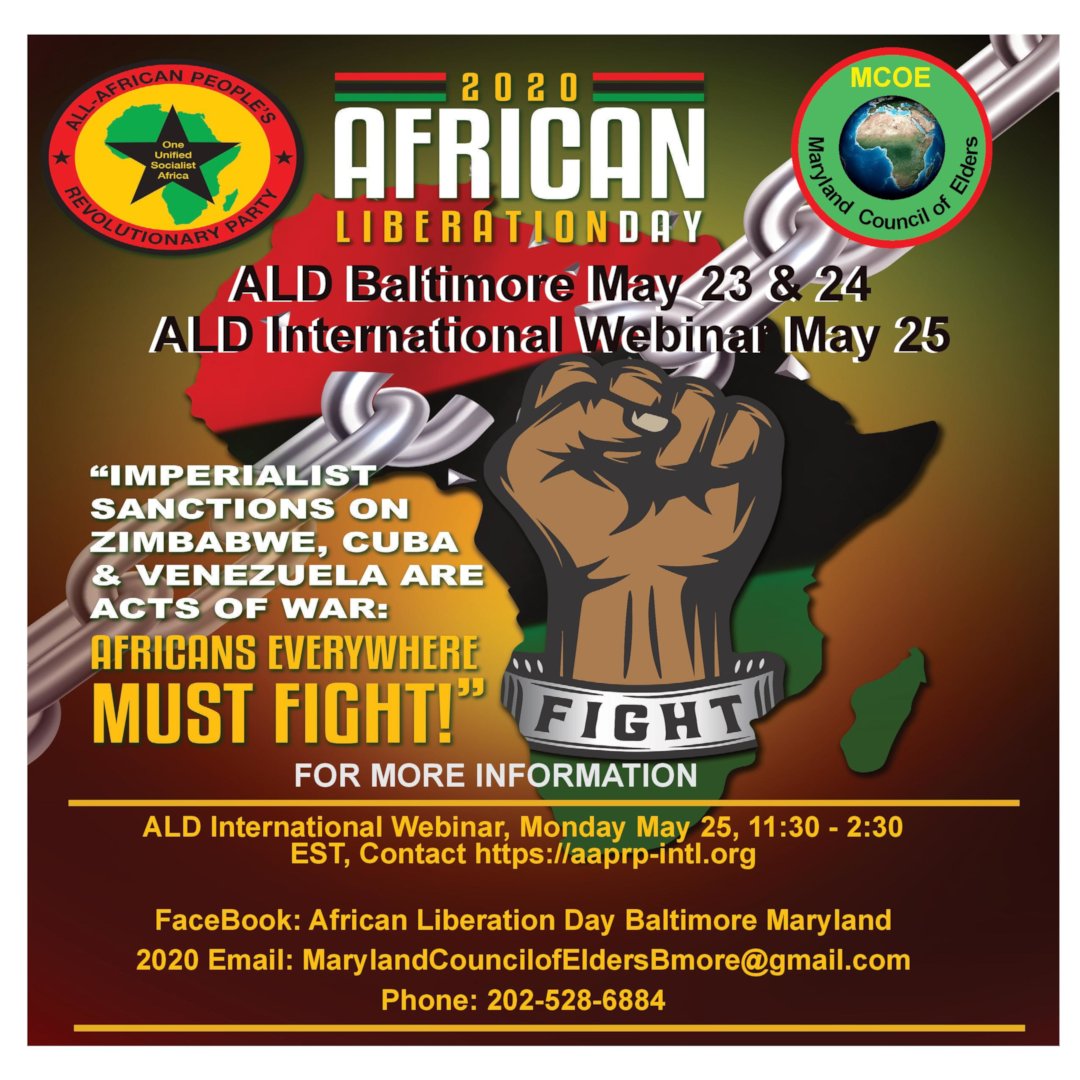