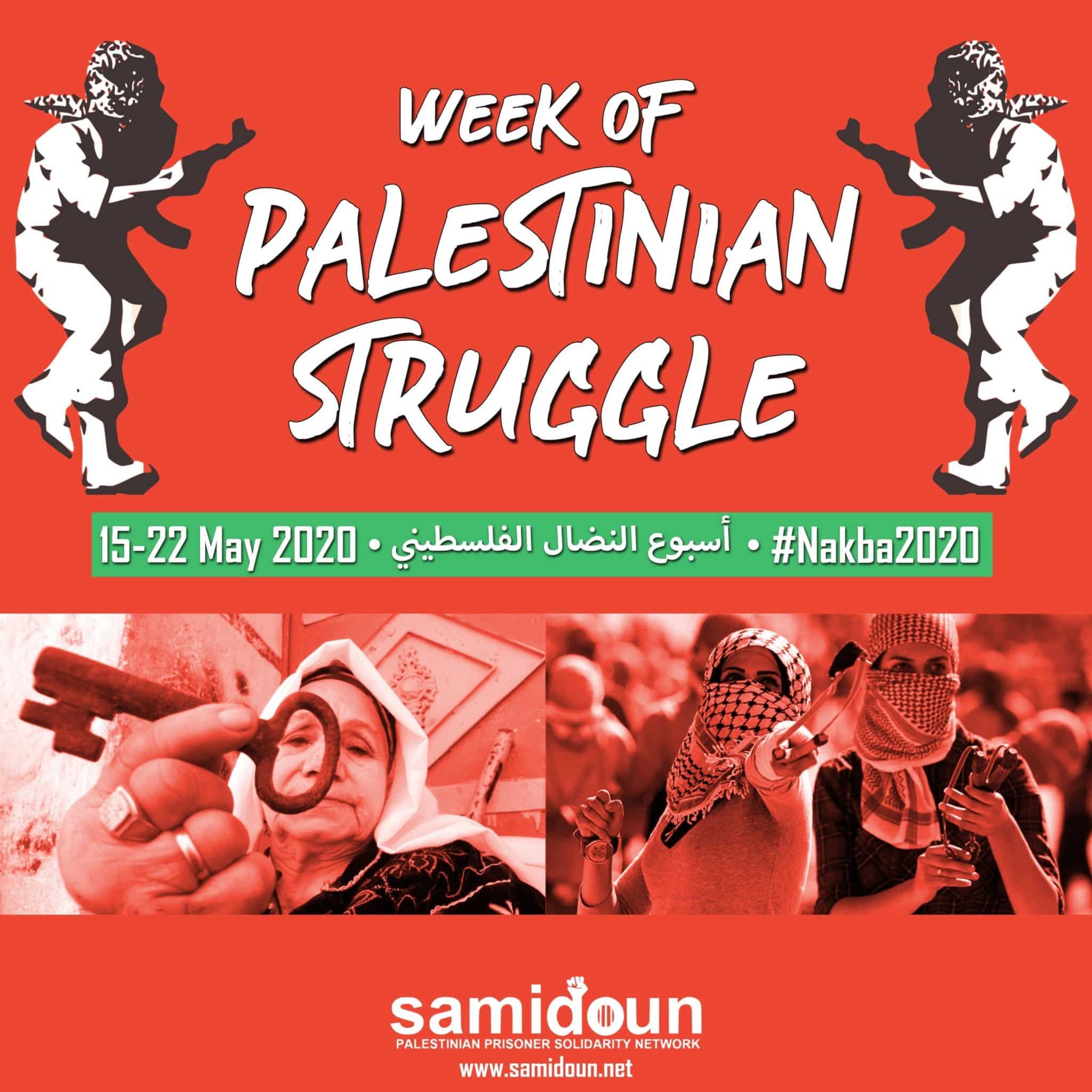 View this call to action in French: https://palestinevaincra.com/2020/05/du-15-au-22-mai-rejoignez-la-semaine-de-lutte-palestinienne/

On 15-22 May 2020 Samidoun Palestinian Prisoner Solidarity Network urges all organizations, activists and movements to join us in a collective Week of Palestinian Struggle.

On these days, we remember the Nakba, the theft of Palestinian land and the dispossession of the Palestinian people. At the same time, we celebrate, affirm and pledge to continue over 72 years of Palestinian resistance for liberation and return.

For decades, the Palestinian people’s  movement has commemorated 15 May and the week that follows as a week of solidarity, resistance and struggle, affirming a revolution that will continue until victory. This week marks the Palestinian, Arab and international struggle for justice and liberation, a struggle that has continued for 72 years and continues every day. As the Nakba continues, the resistance continues!

Join us in a week of virtual and in-person actions to stand with the Palestinian people through 72 years of struggle confronting Zionism, imperialism and reaction and for the liberation of Palestine, from the river to the sea!

We know that the Zionist ethnic cleansing project did not begin on 15 May 1948 – it was mostly completed by this point throughout 78% of historic Palestine after its launch the previous December. More than that, it was built upon decades of military escalation and European colonization in Palestine and throughout the region more broadly, particularly the British colonial mandate and its Balfour declaration. This week of struggle requires confronting the racist, imperial ideology of Zionism on which the colonial regime in Palestine has been constructed.

There are over seven million Palestinian refugees and over 13 million Palestinians in exile and diaspora. The implementation of the right of return to Palestine is a collective and individual right that is at the core of the liberation of Palestine. In recent years, the attempts to liquidate the right of return have intensified, culminating in the so-called “deal of the century.” This week of action pledges to intensify the struggle everywhere for the right to return to Palestine.

This struggle for return and liberation has meant that Palestinians have been on the front lines fighting imperialism for over 72 years, fighting alongside comrades in Ireland, the Philippines, Turkey, South Africa, the indigenous Americas and elsewhere. This week of Palestinian struggle is also a week of struggle against imperialism, especially as the U.S. attempts to impose its “deal of the century” and liquidate the Palestinian cause. Imperialist powers use “anti-terror” laws and repressive measures to repress the struggle for Palestine within their borders as well, from the imprisonment of Georges Abdallah in France to the Holy Land Five in the US, to the targeting of Palestinian activists like Khaled Barakat in Germany for political bans.

Every victory that is achieved for people’s struggles around the world is a victory for Palestine, and every attack on those movements – such as the attempts to foment a coup in Venezuela or blockade Cuba – is also an attack on the Palestinian people. The siege on Gaza is not simply an Israeli siege but also a U.S. and European siege in which Arab reactionary regimes are complicit. During this week of action, we struggle to break the siege on Gaza, bring an end to imperialist sanctions and fight all forms of repression.

Of course, Israel is not the only racist settler colony built on dispossession of indigenous peoples and extraction of their resources; the sponsors of Zionist policy in the United States, Canada and elsewhere. We stand with all oppressed peoples and indigenous movements defending their land from the ravages of settler colonial capitalism.

Just as the Palestinian cause is an international struggle, it is also deeply linked to the fight against imperialism throughout the Arab world and the region more broadly. Arab reactionary regimes like those in Saudi Arabia and Egypt work hand in hand with Israel and the United States to promote normalization, besiege the Palestinian people and squander an independent future for the peoples of the region – and this is reflected in their attacks on the Palestinian movement. We stand with the Arab people and the peoples of the region who continue to fight back and defend their sovereignty and their future against imperialism and reaction.

The Palestinian Authority continues to engage in “security coordination” with the Israeli occupier on a routine basis, attacking the Palestinian resistance. This week of action stands unconditionally with the Palestinian people’s right to resist occupation and oppression and against all forms of normalization and complicity with the liquidation of Palestine.

As we fight these attempts to normalize colonialism, the Week of Palestinian Struggle aims to intensify the boycott of Israel and the complicit corporations that profit from the oppression, dispossession and ethnic cleansing of Palestine. The boycott movement and BDS campaign has faced escalated repression because it poses a material challenge to Israel and its corporate partners. During this week of action, we will expand the movement to isolate and boycott Israel.

Palestinian youth and students are fighting back against imprisonment and for the future of a liberated Palestine .Resisting suppression and imprisonment inside and outside Palestine, they fight – generation after generation until total liberation.

Palestinian women have been on the front lines of struggle for over 72 years, defending the land, educating generations of strugglers and participating fully in leadership of the Palestinian struggle, political organization and armed and popular struggle.

We salute the struggle of the workers and farmers of Palestine, fighting to defend their land and resist exploitation and oppression in all of its forms. Labor organizers are locked inside prisons and fishermen in Gaza are targeted for Israeli gunfire and assault. The popular classes of Palestine have always been the leaders of the revolution and those who have propelled the national liberation movement forward:  the farmers, the workers, the refugees in the camps.

Join this week of action to highlight the voices and struggles of the Palestinian people, inside and outside Palestine, from Haifa, Nazareth and Safad to Gaza, Ramallah and Nablus, from Cairo, Amman and Beirut to Berlin, Brussels, Santiago and New York.

Remember the Nakba: Long live the resistance! Victory for Palestine!

Below are themes for each day through the week, although events may reflect any or all of these themes at any time! Samidoun’s social media will focus on these topics through each day. We encourage you to schedule events and actions on any day during the week, regardless of theme or topic, focusing on the Palestinian liberation struggle and 72 years of continuing resistance. We also present a schedule of the events we know of taking place during the week.

We want to add yours! Email us at samidoun@samidoun.net or use the form below to send in your events and actions!

Friday, 15 May
72 years of struggle and ongoing resistance! Palestinian Workers’ and Farmers’ Struggle for Liberation

Sunday, 17 May
Palestinian Refugees’ Struggle for Liberation and Return to Palestine!

Monday, 18 May
Palestinian Youth and Students – Generation after Generation until Total Liberation

Wednesday, 20 May
Palestinian Women in the Liberation Movement: National and Social Liberation

Thursday, 21 May
Palestinian Prisoners on the Front Lines of the Freedom Struggle