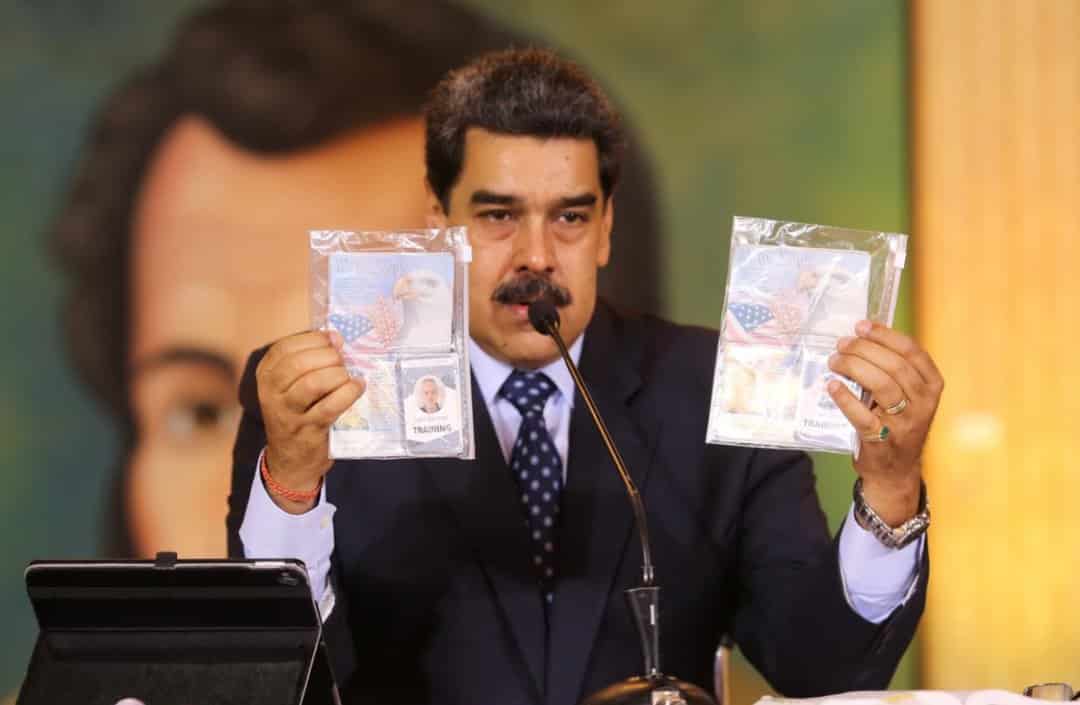 In Venezuela, Operation Gideon is underway; an incursion of Venezuelan and U.S. mercenaries who aim to overthrow the government of Nicolas Maduro. Several of them have already been arrested and killed in the last 48 hours. The orders come from Washington.

The mercenary action against Venezuela was due to begin on March 10. The plans failed because the local opposition failed to activate the necessary street scenario. The arrival of the pandemic and the quarantine disrupted plans for what finally became known as Operation Gideon on Sunday, May 3.

The speedboat where the mercenaries were coming opened fire. It was a dark night. The response of the Bolivarian Government managed to deactivate the members of the boat that capsized, and the patrol boats and helicopter gunships with experts in night combat were deployed over the coast in search of the second boat.

The balance was eight mercenaries killed, two detained and one country that woke up in shock. High-caliber weapons, satellite phones, vehicles were seized. Diosdado Cabello, president of the National Constituent Assembly, took the floor and explained the scenario of the armed incursion in progress. He stated that it was not over.

This Monday 4th, the second deactivation action of another group of mercenaries took place. This time on the coast of Aragua, in the town of Chuao, an area connected through the mountains to the capital of the country. Eight members were arrested there, among them two Americans, Luke Denman and Aaron Berry, former officers of the US Special Operations Forces.

With them was one of the heads of the operation, the fugitive captain, Antonio Sequea, who had participated in the attempted coup of April 30, 2019. The day before, another chief of the operation, fugitive captain Robert Colina, aka Pantera, had died in the confrontation. In the following hours on Monday, another arrest took place, this time of two former police officers, Rodolfo Rodriguez and Yeferson Fernandez, who were carrying logistical materials, such as weapons and vests.

Thus, less than 48 hours after the start of Operation Gideon, the Government managed to capture 12 mercenaries and 8 were killed. They had all left from Colombia, in the Guajira area. Venezuelan intelligence knew what was coming and had prepared to deal with it. The name given by the Government to that defense action was Operation Black First Crush of the Enemy.

What is Operation Gideon?

Caracas achieved the first victories to deactivate the coup plan. According to Venezuelan President Nicolas Maduro, between April 19 and May 3 they had proceeded to dismantle part of the mercenary support base inside the country in other words Operation Gideon was infiltrated.

But who commands and how many members does this mercenary action have? On the afternoon of Sunday, May 2, a video was broadcast on social networks in which two men took the lead: fugitive captain Nieto Quintero and U.S. military contractor Jordan Goudreau, owner of the mercenary Silvercorp USA. Both stated that the operation was still underway and called on the FANB to join in its objectives of capturing Maduro and the leadership of the political process.

Goudreau gave an interview in the evening to tell his version of events. The former member of the US Special Forces stated that he had been in charge of the planned actions for months from Colombia and that this operation had been initially agreed on with Juan Guaidó, with whom he had signed a contract for 212 million dollars, but Guaidó had never fulfilled his part.

The existence of that contract, which Goudreau showed, had been denied by Guaidó since March when former Major General Cliver Alcalá had confessed that he was leading an attempted military incursion from Colombia in which Guaidó was immersed. That incursion was the one that reached the Venezuelan coast last Sunday morning.

In this way Guaidó was exposed in what Goudreau confirmed as his initial involvement and then betrayal. Both the self-proclaimed president and the opposition sector surrounding him denied the existence of Operation Gideon and accused the government of having carried out a montage to cover up the difficulties in the country.

So according to the contractor’s explanation, and later that given by Quintero, the operation was developed almost without financing, without support from the U.S. Government, Colombia, or the Venezuelan opposition. It would have been a mercenary self-management that would have gathered, according to Quintero, “about 3,000 members among officers, noncommissioned officers, troops in exile”.

The privatization of war

Two days before the start of Operation Gideon, an article was published in the AP news agency, in which Goudreau’s existence, his relationship with Cliver Alcalá and part of the mercenary plot was noted. Both were presented as isolated actors within an attempted armed incursion into Venezuela.

The attempt was to remove all U.S., Colombian and Guaidó ties began before the first action was taken. The aim was to exonerate the political actors from the zero hour and relieve them of all responsibility in the face of such an action of war and probable defeat.

Thus, neither the contractor nor the mercenary training camps – denounced on several occasions by Maduro – would have been developed in Colombia without anyone knowing it.

This prefabricated version was dismantled by the Venezuelan president on Monday night when he gave an account of those involved. The operation was armed by the United States and operated through its anti-drug agency in Colombian territory, the DEA, where U.S. instructors trained the teams that entered Venezuela.

According to Maduro, during Colombian President Ivan Duque’s last visit to the White House on March 2, U.S. President Donald Trump gave him the order to initiate the actions which, after delays, were carried out.

As for financing, a central part came from the “capos and cartels of the Colombian Upper Guajira,” said Maduro, the area where most of the military training centers were located. They also relied on criminal gangs from several Venezuelan states, including Falcón, La Guaira, Caracas and Miranda.

It was never a question of mercenary self-financing motivated by altruism, as Goudreau and Quintero pointed out, but rather a format implemented by the United States for many years and that is the privatization of war.

The scheme goes as follows: Washington tightens the economic blockade, puts a price on the heads of Nicolás Maduro and Diosdado Cabello, reinforces its military presence in the Caribbean Sea, announces a transition framework, gets diplomatic support, and works the covert military operations through a contractor and Venezuelan deserters from the rear which is in the territory of Colombia.

President Donald Trump said on Tuesday, as expected, that he was not aware of the operation and denied that his government was involved.

Are we at war?

One of the most striking photographs was that of a militiaman in civilian clothes with a gun in his hand in the front of the boat with the mercenaries in Chuao. The role of what is called popular intelligence has been central, as Diosdado Cabello explained.

The Venezuelan civil-military deployment is on high alert to the development of what is not yet over. According to the government, 56 mercenaries tried to enter the country, 54 Venezuelans and two Americans, some of whom have been arrested and others killed in Sunday morning’s confrontation. The objective of these groups was to attack the DGCIM, SEBIN and the Miraflores Palace.

The structuring of the final plan to asphyxiate Venezuela

The strategy of Caracas is to deactivate the actions before they happen, to avoid the execution of the coup plans. The captures, so far, have been early: before the mercenary’s entry and during the arrival of part of the boats.

Venezuela is facing a new phase of an uninterrupted siege. The bet of the United States is to achieve that the set of variables with guerilla type attacks to finally succeed in overthrowing Nicolás Maduro so that the restoration and revenge foreseen within the strategy designed from Washington can begin.

The Government and Chavism are facing a scenario with three simultaneous fronts: the fight against the pandemic, which is under control due to the measures implemented, the economic situation, which is largely delicate due to the US blockade, and the mercenary incursion of Operation Gideon.