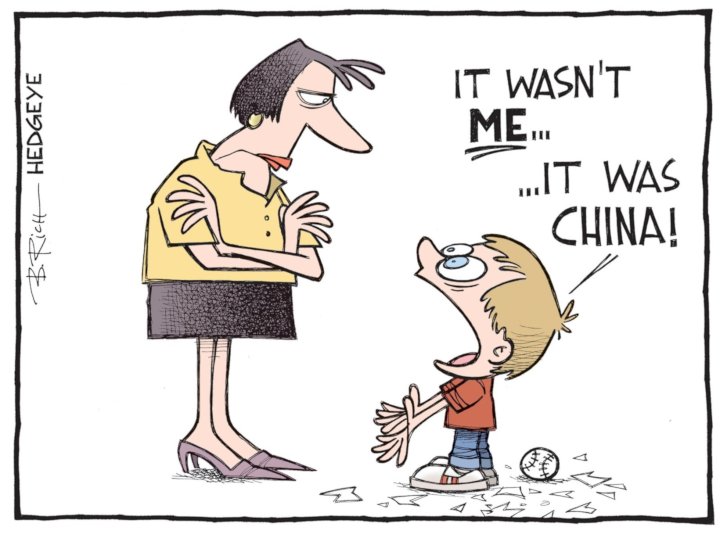 The campaign of slander against China to deflect criticism of President Trump over the COVID-19 pandemic has ratcheted up in recent days.

It isn’t only a defensive move by the Trump administration itself. A leaked memo by GOP strategists urged Republican senatorial candidates to attack China instead of attempting to defend Trump during their election campaigns.

Trump himself is pushing the phony lab story — that the virus originated in a laboratory in Wuhan. Until recently, he was even raising the possibility that the virus was created purposely as a bioweapon. On May 1, he seemed to back off the bioweapon claim but is clinging to the story that the virus “escaped” the Wuhan lab in an accident.

Trump is also hammering away on the notion that China delayed reports of casualties from the virus, thereby setting up the rest of the world for a pandemic. For his part, Secretary of State Mike Pompeo has also pushed the lab claim, and has also leveled charges that China downplayed the severity of the disease in January in order to hoard medical supplies and equipment.

The U.S. states of Missouri and Mississippi are suing China. Right-wingers like former Trump aide Steve Bannon, Sens. Marco Rubio, Tom Cotton, Ted Cruz and others are all trafficking in China bashing.

It would be easy to dismiss all of this as more absurd bluster by Trump and his right-wing sycophants, but presumed Democratic nominee for president Joe Biden says that Trump has failed to hold China accountable and that he would be even tougher on China, were he to win the election.

According to the April 30 New York Times, so-called “China hawks” in the administration pushed so hard for U.S. spy agencies to say there was evidence to support the lab theory, that there was disgruntlement, with a former CIA official even accusing the administration of “conclusion shopping.” That resistance may have been a reflection of how much is at stake in China for U.S. companies that make billions doing business there. A subsequent report by the Office of the Director of National Intelligence indicated that although they see no evidence to support the bioweapon theory, they will continue “investigating” the possibility that the virus “escaped” the Wuhan lab by accident.

Scientists are tired of explaining

The lab theory has been refuted by scientists, including the Federation of American Scientists and the World Health Organization (WHO). Both disagree that the virus could have originated from a laboratory — not by design, nor by accident. An April 20th sciencealert.com article called “Scientists Are Tired of Explaining Why The COVID-19 Virus Was Not Made in a Lab” quotes Kristian Andersen, a professor in the Department of Immunology and Microbiology at Scripps Research Institute: “By comparing the available genome sequence data for known coronavirus strains, we can firmly determine that SARS-CoV-2 originated through natural processes. One strong indicator that the new coronavirus evolved naturally, are flaws in the protein it uses to bind to human cells — deficiencies that someone trying to engineer a killer virus would have almost certainly avoided.”

Vox reported that Peter Daszak, a U.S. scientist who has studied coronaviruses and bats (the animal host) with colleagues in China, and at times in the lab in question, says that there was never a sample of the novel coronavirus at the Wuhan laboratory, only samples of similar coronaviruses. The genetic differences between those samples and the COVID-19 virus are significant.

Even though they are in the same family of viruses, it would take decades of mutations for any of those samples to match the virus that has caused COVID-19. Daszak said, “No one had SARS-CoV-2 in culture. All of the hypotheses [of lab release] depend on them having it in culture or having bats in a lab. No one’s got bats in a lab, it’s absolutely unnecessary and very difficult to do.” The funding from the National Institute of Health that enabled Daszak’s collaborative work with China was cut off on April 23.

The claim being pushed by Pompeo is that China underreported cases and deaths in January, and didn’t disclose that there was human-to-human transmission. This, the line goes, was so that other countries wouldn’t grasp the potential spread of the disease, and then China could stealthily stockpile and hoard medical equipment and supplies through regular trade. The accusation is sickening, given the level of cooperation and aid to other countries that China has exhibited, even after gaining control in the battle against the virus at home.

Chinese doctors first reported the outbreak to the WHO on Jan. 1. All they knew at the time was that there was a cluster of cases of pneumonia. The WHO issued an online guidance on Jan. 10 that said, “Based on experience with SARS and MERS … recommending droplet and contact precautions when caring for patients, and airborne precautions for aerosol generating procedures conducted by health workers.”

For scientists, medical professionals and government officials, that is a clear warning about contagion. The WHO, along with the most prestigious medical journals, the Journal of the American Medical Association, the New England Journal of Medicine and Lancet have all published about COVID-19 and closely watched the casualty statistics. None have reported any suspicion that China was underreporting at any time.